What is a system?

In signals and systems terminology, we say; corresponding to every possible input signal, a system “produces” an output signal.

In that sense, realize that a system, as a mapping is one step hierarchically higher than a signal. While the correspondence for a signal is from one element of one set to a unique element of another, the correspondence for a system is from one whole mapping from a set of mappings to a unique mapping in another set of mappings!

Examples of systems are all around us. The speakers that go with your computer can be looked at as systems whose input is voltage pulses from the CPU and output is music (audio signal). A spring may be looked as a system with the input , say, the longitudinal force on it as a function of time, and output signal being its elongation as a function of time. The independent variable for the input and output signal of a system need not even be the same. 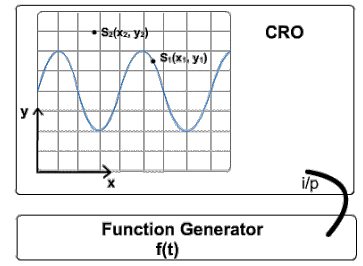 An input voltage signal f(t) is provided to the CRO by using a function generator. The CRO (the system) transforms this input function into an image that is displayed on the CRO screen. The luminosity of every point on this display (i.e.value of the signal) is dependent on the x and y coordinates.So, the output S(x, y) has it's independent variable as space, whereas the input independent variable is time.

The mappings that define the system are different in these two cases.

We shall next discuss what system description means.

When a closed form system description is provided, it may either be classified as an explicit description or an implicit one.

The mapping involved in systems

We shall next discuss the idea of mapping in a system in a little more depth. 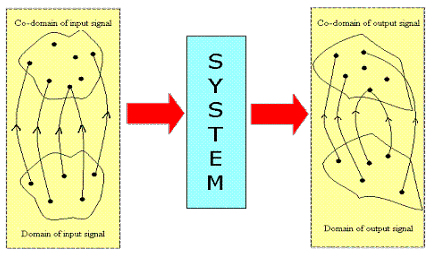 depends on only the value of the input signal at t = 5. For example, consider the system with description: