A flood is commonly considered to be an unusually high stage of a river.  For a river in its natural state, occurrence of a flood usually fills up the stream up to its banks and often spills over to the adjoining flood plains.  For a hydraulic structure planned within the river (like a dam or a barrage) or on an adjoining area (like flood control embankments), due consideration should be given to the design of the structure so as to prevent it from collapsing and causing further damage by the force of water released from behind the structure.  Hence an estimate of extreme flood flow is required for the design of hydraulic structures, though the magnitude of such flood may be estimated in accordance with the importance of the structure.  For example, the design flood for a large dam like the Bhakra (Figure 1) or the Hirakud (Figure 2) would be estimated to be more than a medium sized dam like Chamera (Figure 3). It must be remembered that proper selection of design flood value is of great importance.  While a higher value would result in an increase in the cost of hydraulic structures, an under-estimated value is likely to place the structure and population involved at some risk. 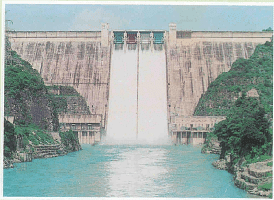 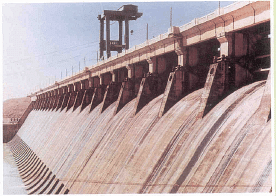 The project across river Mahanadi in the state of Orissa, completed in 1957, provides annual irrigation to 2.51 lac ha. Length of the dam (including Dykes) is 25.5 Km. 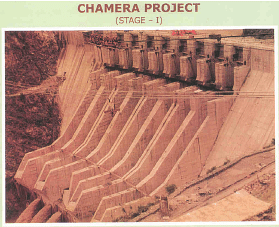 The project is located across river Ravi in the state of Himachal Pradesh. Its hydel power generation (installed capacity) is 540 MW.

The Design Flood for a hydraulic structure may also be defined in a number of ways, like:

Design Flood is also known as the Inflow Design Flood (IDF).  It is the flood adopted for design purpose, and could be:

The Bureau of Indian standard guidelines IS: 5477 (Part IV) recommends that the Inflow Design Flood (IDF) of a structure, depending on its importance or risk involved, may be chosen from either one of the following:

The IDF’s for different types of structures constructed across rivers are different.  Some of the structures which are of importance to water resources engineering are:

A brief description of the structures and their corresponding IDF’s are discussed subsequently.

Dams are important hydraulic structures which are constructed to serve a variety of purpose, more of which shall be discussed in detail in lesson 3.2.  Most dams have a capacity to store substantial amount of water in the reservoir, and a portion of the inflow flood gets stored and the excess overflows through the spillways.  According to Bureau of Indian Standard guidelines IS: 11223-1985, “Guidelines for fixing spillway capacity”, the IDF to be considered for different requirements

IDF for the safety of the dam It is the flood for which, when used with standard specifications, the performance of the dam should be safe against overtopping, structural failures, and the spillway and its energy dissipation arrangement, if provided for a lower flood, should function reasonable well.

Floods of larger or smaller magnitude may be used if the hazard involved in the eventuality of a failure is particularly high or low.  The relevant parameters to be considered in judging the hazard in addition to the size would be:

It is a flood which may be lower than the IDF for the safety of the dam.  When this flood is used with standard specifications or other factors affecting the performance, the energy dissipation arrangements are expected to work most efficiently.

This depends upon local conditions, type of property and effects of the submergence for very important structures upstream like power house, mines, etc.  Levels corresponding to SPF or PMF may be used to determine submergence effects. For other structures consideration of smaller design floods and corresponding levels attained may suffice.  In general, a 25 – year flood for land acquisition and 50 – year flood for built up property acquisition may be adopted.

IDF for checking extent of downstream damage in the valley

This depends on local conditions, the type of property and effects of its submergence.  For very important facilities like powerhouse, outflows corresponding to the inflow design flood for safety of the dam, with all spillway gates operative or of that order may be relevant.  Normally damage due to physical flooding may not be allowed under this condition, but disruption of operation may be allowed.

Design flood for barrages and weirs

Weirs and barrages, which are diversion structures, have usually small storage capacities, and the risk of loss of life and property would rarely be enhanced by failure of the structure.  Apart from damage/loss of structure the failure would cause disruption of irrigation and communications that are dependent on the barrage.  According to the bureau of Indian Standard guidelines IS: 6966(Part-I) -1989, “Hydraulic design of barrages and weirs-guidelines for alluvial reaches”, the following are recommended