Whenever a hydraulic structure like a dam or a barrage is constructed across a river, a temporary structure called a coffer dam is built first for obstructing the river flow and the water diverted though a diversion channel or tunnel.  The Bureau of Indian Standards in its guideline IS: 10084 (Part I) -1982, “Criteria for design of diversion works - Part I: Coffer Dams” recommends the following:

For seasonal cofferdams (those which are constructed every year and washed out during the flood season), and the initial construction stages of the main structure, a flood frequency of 20 years or more can be adopted.  For coffer dams to be retained for more than one season and for the advanced construction stage of the main structure, a flood of 100 years frequency may be adopted”.

Cross drainage works are normally encountered in irrigation canal network system.  Generally canals flow under gravity and often are required to cross local streams and rivers. This is done by either conveying the canal water over the stream by overhead aqueducts or by passing below the stream though siphon aqueducts.  These structures are called cross drainage works and according to the Bureau of Indian Standard guidelines IS:7784 (Part I) – 1993, “Code of practice for design of cross – drainage works” the following is recommended.

*This refers to the discharge estimated on the basis of river parameters corresponding to maximum observed flood level. ** in case of very large cross drainage structures where estimated drainage discharge is above 150 m3/s and canal discharge greater than 30 m3/s, the hydrology should be examined in detail and appropriate design flood adopted, which is no case shall be less than 1 in 100 years flood

The criteria for choosing the design flood for various types of hydraulic structures were discussed.  For each one of these, any of the following three methods are suggested:

The methods for evaluating PMF and SPF fall under the hydrometeorological approach, using the unit hydrograph theory.  Flood of a given frequency (or return period) is obtained using the statistical approach, commonly known as flood frequency analysis.  In every method, adequate data for carrying out the calculations are required.  The data which are required include long term and short term rainfall and runoff values, annual flood peaks series, catchment physiographic characteristics, etc.

Within the vast areal extent of our country, it is not always possible to have observations measured on every stream.  There are a large number of such ungauged catchments in India which has to rely on synthetically generated flood formulae.  The Central Water Commission in association with the India Meteorological Department and Research Design and Standard Organization unit of the Indian Railways have classified the country into 7 zones and 26 hydro-meteorologically homogeneous sub-zones, for each one of which flood estimation guidelines have been published.  These reports contain ready to use chart and formulae for computing floods of 25, 50 and 100 year return period of ungauged basins in the respective regions.

In the subsequent section, we look into some detail about the calculations followed for the computation of

The probable maximum flood (PMF) or the standard project flood (SPF) is estimated using the hydro-meteorological approach.  For the PMF calculations the worst possible maximum storm (PMS) pattern is estimated.  This is then applied to the unit hydrograph of the catchment to obtain the PMF.  For the calculation so the SPF, the worst observed rainfall pattern (called the Standard Project Storm or SPF) is applied to the unit hydrograph derived for the catchment.

For the estimation of the PMS or the SPS, which falls under the hydrometeorological approach, an attempt is made to analyze the causative factors responsible for the production of severe floods.  The computations mainly involve estimation of a design storm hyetograph (from past long-term rainfall data within the catchment) and derivation of the catchment response function used which can either be a lumped model or a distributed-lumped model.  In the former, a unit hydrograph is assumed to represent the entire catchment area.  In the distributed-lumped model, the catchment is divided into smaller sub-regions or sub-catchment and the unit hydrographs of each sub-region are applied together with channel routing and sometimes reservoir routing to produce the catchment response.

These are explained in detail in the additional section at the end of this lesson.

The statistical approach for design flood estimation, otherwise also called flood frequency analysis, may be performed on the past recorded data of annual flood peak discharges either directly observed at the site or estimated by a suitable method.  Alternatively, frequency analysis may be carried out on the available record of annual rainfall events of the region.

The probability of occurrence of event (say, the maximum flood discharge observed or likely to occur in a year at a location on a river), whose magnitude is equal to or in excess of a specified magnitude X is denoted by P.  A related term, the reccurrence interval (also known as the return period) is defined as T = 1/P.  This represents the average interval between the occurrence of a flood peak of magnitude equal to or greater than X.

Flood frequency analysis studies interpret past record of events to predict the future probabilities of occurrence and estimate the magnitude of an event corresponding to a specific return period.  For the estimation of flood flows of large return periods, it is often necessary to extrapolate the magnitude outside the observed range of data.  Though a limited extrapolation to about twice the length of the record (that is, the number of years of data that is available) expected to yield reasonable accuracy, often water resources engineers are required to project much more than that.

Basic to all frequency analyses, is the concept that there is a collection of data, called the ‘population’.  For flood frequency studies, this population are taken as the annual maximum flood occurring at a location on a river (called the site).  Since the river has flooded during the past years and is likely to go on flooding over the coming years (unless something exceptional like drying up of the river happens!), the recorded flood peak values which have been observed for a finite number of years are only a sample of the total population.   Here, ‘flood peak’ means the highest recorded discharge value for the river at any year. The following assumptions are generally made for the data:

Flood frequency analysis starts by checking the consistency of the data and finding the presence of features such as trend, jump, etc.  Trend is the gradual shift in the sample data, either in the increasing or decreasing directions.  This may occurs due to human interference, like afforestation or deforestation of the watershed.  Jump means that one or a few of the data have exceptional values – high or low, due to certain factors, like forest fire, earthquake, landslide, etc which may change the river’s flow characteristics temporarily.

The next step is to apply a convenient probability distribution curve to fit the data set.  Here, it is assumed that yearly observed peak flow values are random numbers and which are also representative of the population, which includes all flood peak values, even these which have not been recorded or such floods which are likely to happen in future.  Each data of the set is termed as a variate, usually represented by ‘x’ and is a particular value of the entire data range ‘X’. 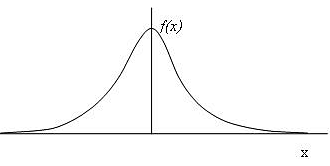 The cumulative probability curve, F(x) is of the type as shown in Figure 5.

The cumulative probability, designated as P(x ≤ x), represents the probability that the random variable has a value equal to or less than certain assigned value x is equal to 1 – P(x ≤ x), or P(x ≥ x).

In the context of flood frequency analysis, we may use the above concepts by assuming the recorded yearly flood peaks as the variate ‘x’.  Then, if the functions f(x) or F(x) becomes known, then it is possible to find out the probability with which certain high flood peak is likely to occur.  This idea may be used to recalculate the high flood peak that is likely to be equalled or exceeded corresponding to a given frequency (say, 1 in 100 years).

There are a number of probability distributions f (x), which has been suggested by many statisticians.  Of these, the more common are

Which one of these fits a given data set has to be checked using certain standard statistical tests. Once a particular distribution is found best, it is adopted for calculation of floods likely to occur corresponding to specific return periods.

Details of the above methods may be found in the additional section at the end of this lesson.

So far we talked about extrapolation of the sample data.  However, if probability is to be assigned to a data point itself, then the ‘plotting position’ method is used.  Here, the sample data (consisting of, say, N values) is arranged in a decreasing order.  Each data (say the event X) of the ordered list is then given a rank ‘m’ starting with 1 for the highest up to N for the lowest of the order.  The probability of exceedence of X over a certain value x, that is P(X ≥ x) is given differently by different researchers, the most common of which are as given in the table below:

Of these, the Weibull formula is most commonly used to determine the probability that is to be assigned to data sheet.

The application of the method of plotting may be explained better with an example. Assume that the yearly peak flood flows of a hypothetical river measured at a particular location over the years 1981 to 2000 is given as in the following table. The data is to used to calculate the flood peak flow that is likely to occur once every 10 years, and once every 50 years.

Rearranging table according to decreasing magnitude, designate a plotting position and calculate the probability of exceedence by, say, the Weibull formula shown in the following table which also gives the Return Period T (1/P).