A simple cantilever type leaf spring is shown in the Fig. 7.3.1. In the cantilever beam type leaf spring, for the same leaf thickness, h, leaf of uniform width, b (case 1) and, leaf of width, which is uniformly reducing from b (case 2) is considered. From the basic equations of bending stress and deflection, the maximum stress, σmax and tip deflection, δmax can be derived.

Where, E is the Elastic modulus of the spring material.

In the second case it is observed that instead of uniform width leaf, if a leaf of varying width (triangular one as shown in the figure) is used, the bending stress at any cross section is same and equal to σmax . This is called as leaf of a uniform strength. Moreover, the tip deflection being more, comparatively, it has greater resilience than its uniform width counterpart. Resilience, as we know, is the capacity to absorb potential energy during deformation. However, one should keep in mind that in order to withstand the shear force the tip has to have some width. This is shown as a red zone in the figure. In one way non uniform width leaf is a better design than a uniform width leaf. Leaf spring of simply supported beam type is shown in the Fig. 7.3.3, for which the stress and deflection equation are also given as in the case of cantilever. 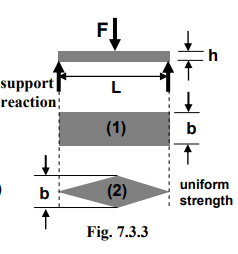 One of the applications of leaf spring of simply supported beam type is seen in automobiles, where, the central location of the spring is fixed to the wheel axle. Therefore, the wheel exerts the force F (opposite to the direction shown in the figure), on the spring and support reactions at the two ends of the spring come from the carriage. The diamond shaped leaf, shown as case 2, is named as Lozenge shape and it is again a beam of uniform strength.

Design theme of a leaf spring

Let us consider the simply supported leaf of Lozenge shape for which the maximum stress and maximum deflection are known. From the stress and deflection equations the thickness of the spring plate, h, can be obtained as,

The σmax is replaced by design stress σdes. Similarly, δ max is replaced by δ des. E is the material property and depends on the type of spring material chosen. L is the characteristic length of the spring. Therefore, once the design parameters, given on the left side of the above equation, are fixed the value of plate thickness, h can be calculated. Substitution of h in the stress equation above will yield the value of plate width b.

One of the difficulties of the uniform strength beam, say Lozenge shape, is that the value of width b sometimes is too large to accommodate in a machine assembly. One practice is that instead of keeping this large width one can make several slices and put the pieces together as a laminate. This is the concept of laminated spring. The Fig.7.3.4 shows the concept of formation of a laminated spring.

The Lozenge shaped plate is cut into several longitudinal strips, as indicated in the figure. The central strip, marked 1 is the master leaf which is placed at the top. Then two pieces, marked 2 are put together, side by side to form another leaf and placed below the top leaf. In the similar manner other pairs of strips, marked 3 and 4 respectively are placed in the decreasing order of strip bN length to form a laminated spring. Here width of each strip, is given as,

In practice, strips of width,bN  and lengths, say equal to strip1, strip2 etc., as shown in the example, are cut and put in the laminated form. The stress and deflection equations for a laminated spring is,

Where, constants p and q are given as,

It is to be noted that the ends of the leaves are not sharp and pointed, as shown in figure. In fact they are made blunt or even made straight to increase the load bearing capacity. This change from ideal situation does not have much effect on the stress equation. However, small effect is there on the deflection equation.

In the following section we will discuss about few more constructional details of a laminated leaf spring. The Fig 7.3.5 shows a laminated semi- elliptic spring. The top leaf is known as the master leaf. The eye is provided for attaching the spring with another machine member. The amount of bend that is given to the spring from the central line, passing through the eyes, is known as camber. The camber is provided so that even at the maximum load the deflected spring should not touch the machine member to which it is attached. The camber shown in the figure is known as positive camber. The central clamp is required to hold the leaves of the spring. However, the bolt holes required to engage the bolts to clamp the leaves weaken the spring to some extent. Rebound clips help to share the load from the master leaf to the graduated leaf.

Materials for leaf spring are not as good as that for the helical spring. Plain carbon steel, Chromium vanadium steel, Chromium- Nickel- Molybdenum steel, Silicon- manganese steel, are the typical materials that are used in the design of leaf springs.

In order to carry heavy load few more additional full length leaves are placed below the master leaf for heavy loads. Such alteration from the standard laminated leaf spring, what we have learnt above, does not change the stress value, but deflection equation requires some correction.

Where, correction in deflection, δc is given as,

N   = Total number of leaves in the spring

Stresses due to support hinges

The master leaf of a laminated spring is hinged to the supports. The support forces induce, stresses due to longitudinal forces and stresses arising due to possible twist. Hence, the master leaf is more stressed compared to other the graduated leaves. Methods to reduce additional stresses could be,

The last method is explained through Fig 7.3.6.

Let us consider the design to be based on uniform strength beam. Then from section 7.3.2 we find that,

It is observed that the width is too large to accommodate as a machine member. Hence, if we consider, say 6 springs, then width of each spring becomes 54mm.