Thus, we can say:

It can be calculated with the help of percentages also. In this question, the percentage increase in the denominator is 50%, so the numerator will also increase by 50%.

Two quantities A and B are said to vary with each other if there is some relationship between A and B such that the change in A and B is uniform and guided by some rule.

➢ Some Typical Examples of Variation

Essentially there are two kinds of proportions that two variables can be related by: 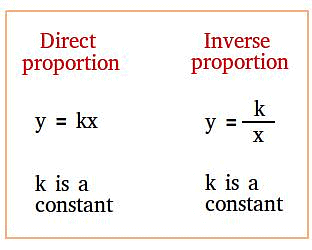 When it is said that A varies directly as B, you should understand the following implications:

(a) Logical Implication: When A increases B increases.

(b) Calculation Implication: If A increases by 10%, B will also increase by 10.

(c) Graphical Implications: The following graph is representative of this situation. 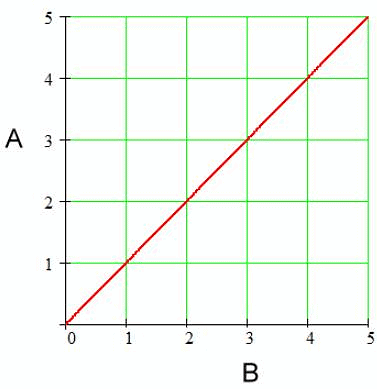 When A varies inversely as B, the following implication arises.

(a) Logical Implication: When A increases B decreases.

(c) Graphical Implications: The following graph is representative of this situation. 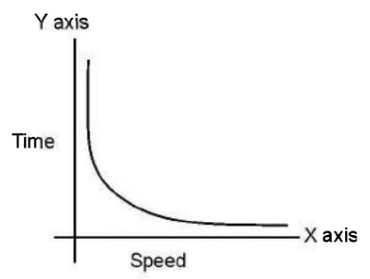 (d) Equation Implication: The product A X B is constant.

Example 1: The height of a tree varies as the square root of its age (between 5 and 17 years). When the age of a tree is 9 years, its height is 4 feet. What will be the height of the tree at the age of 16?

Solution: Let us assume the height of the tree is H and its age is A years.

View Solution
Question for Detailed Notes: Proportion
Try yourself:Rs. 5783 is divided among Sherry, Berry, and Cherry in such a way that if Rs.28, Rs.37 and Rs.18 be deducted from their respective shares, they have money in the ratio 4:6:9. Find Sherry’s share.
Explanation

Note: For problems based on this chapter we are always confronted with ratios and proportions between different number of variables. For the above problem we had three variables which were in the ratio of 4 : 6 : 9. When we have such a situation we normally assume the values in the same proportion, using one unknown ‘x’ only (in this example we could take the three values as 4x, 6x and 9x, respectively).Then, the total value is represented by the addition of the three giving rise to a linear equation, which on a solution, will result in the answer to the value of the unknown ‘x’.

Question for Detailed Notes: Proportion
Try yourself:If 10 persons can clean 10 floors by 10 mops in 10 days, in how many days can 8 persons clean 8 floors by 8 mops?
Explanation

Do not get confused by the distractions given in the problem. 10 men and 10 days means 100 man-days are required to clean 10 floors. That is, 1 floor requires 10 man-days to get cleaned. Hence, 8 floors will require 80 man-days to clean.

View Solution
Question for Detailed Notes: Proportion
Try yourself:The ratio of water and milk in a 30-litre mixture is 7 : 3. Find the quantity of water to be added to the mixture in order to make this ratio 6 :1.
Explanation

This document is the final document of EduRev’s notes of Ratios & proportions chapter. In the next document we have tried to solve the different CAT previous year questions & curated some of the best tests for you to practice - as a CAT aspirant you should be well aware of types of questions and should have a good practice of questions. Hence we suggests you to practice all the questions in the upcoming documents & Tests.