INTRODUCTIONDifferentiation is one of the most important fundamental operations in calculus. Its theory primarily depends on the idea of limit and continuity of function. To express the rate of change in any function we introduce concept of derivative which involves a very small change in the dependent variable with reference to a very small change in independent variable. Thus differentiation is the process of finding the derivative of a continuous function. It is defined as the limiting value of the ratio of the change (increment) in the function corresponding to a small change (increment) in the independent variable (argument) as the later tends to zero.DERIVATIVE OR DIFFERENTIAL COEFFICIENTLet y = f(x) be a function. If h (or Δx) be the small increment in x and the corresponding increment in y or f(x) be Δy = f(x+h) – f(x) then the derivative of f(x) is defined

. The derivative of f(x) is also known as differential coefficient of f(x) with respect to x. This process of differentiation is called the first principle (or definition or abinitio) (Ab-initio)Note: In the light of above discussion a function f (x) is said to differentiable at x = c if

We will now study this with an example.

Thus, derivative of f(x) exists for all values of x and equals 2x at any point x.Examples of differentiations from the 1st principlei) f(x) = c, c being a constant.Since c is constant we may write f(x+h) = c.

Table: Few functions and their derivatives

It should be noted here even though in (ii), (iii), (iv) and (v) we have considered two functions f and g, it can be extended to more than two functions by taking two by two.Example: Differentiate each of the following functions with respect to x:(a) 3x2 + 5x –2(b) ax + xa + aa

DERIVATIVE OF A FUNCTION OF FUNCTIONIf y = f [h(x)]

.  In such case differentiation of both

sides with respect of x and substitution of

gives the result. Thereafter y1 may be obtained by solving the resulting equation.Example:

Solution: Taking logarithm, we may write

Differentiating throughout we have

Differentiating w.r.t. x we get

GEOMETRIC INTERPRETATION OF THE DERIVATIVE 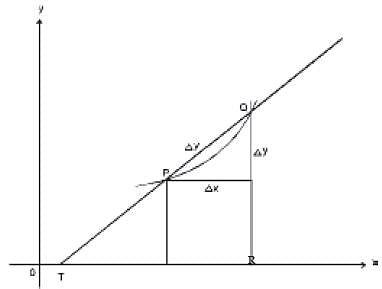 coordinates are (x, y) and (x + Δx, y+Δy) respectively. The slope of the chord TPQ is given

The derivative of f(x) at a point x represents the slope (or sometime called the gradient of the curve) of the tangent to the curve y = f(x) at the point x. if

exists for a particular point say x =a and f(a) is finite we say the function is differentiable at x = a and continuous at that point.

denotes the variable cost and F(x) is the fixed cost. Variable cost depends upon the number of units produced (i.e value of x) whereas fixed cost is independent of the level of output x. For example,

Marginal Cost: If C(x) the total cost producing x units then the increase in cost in producing one more unit is called marginal cost at an output level of x units and is given as dC/dxMarginal Cost (MC) = Rate of change in cost C per unit change in Output at an output level of x units = dC/dxTo increase profits of a company may decide to increase its production. The question that concerns the management is how will the cost be affected by an increase in production.

Economists use the marginal cost to answer the question.Example 1: The total cost function of a firm is where is the total cost and is outpout. A tax at the rate of ₹ 2 per unit of output is imposed and the producer adds it to his cost. If the market demand function is given by , where ₹ p is the price per unit of output, find the profit maximising output and price for maximum profit.

Solution:
After the imposition of tax of ₹ 2 per unit, the total new cost is

where x denotes the output. Find the level of output at which:(i) marginal cost is minimum(ii) average cost is minimumSolution:M(x) = Marginal Cost = C(x)

Hence, marginal cost is minimum at x = 8.(ii) A(x) is maximum or minimum when

selling x units of a product. If x units are sold at ‘P per unit, then R(x) = P.XMarginal Revenue: It is the rate of change I revenue per unit change in output. If R is the revenue and x is the output, then