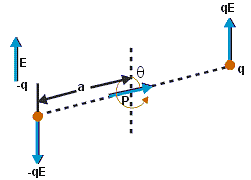 on positive charge in upward direction (same direction as

) and on negative charge in downward direction (opposite direction to

acts a torque in a clockwise direction, thereby making the dipole to rotate in a uniform external electric field.

Torque always acts in a couple, and its magnitude equals to the product of force and its arm. Arm is the distance between the point where the force acts and the point which rotates the dipole. In the dipole placed in the uniform external electric field, we take origin as the point. Torque is denoted by the symbol

and as it has a direction, it is a vector quantity.

The vector form of torque is the cross product of dipole moment and electric field.To understand what cross product is, let’s take an example.

The net external force acting on the dipole will be zero, hence it will not translate in space. But the same cannot be said about the net torque on the dipole.    In short,

represents the dipole moment of the electric dipole and

represents the external electric field in which the dipole is kept.

Observations in net force and torqueTaking the nature of electric field and position of the dipole, following remarks will come out: 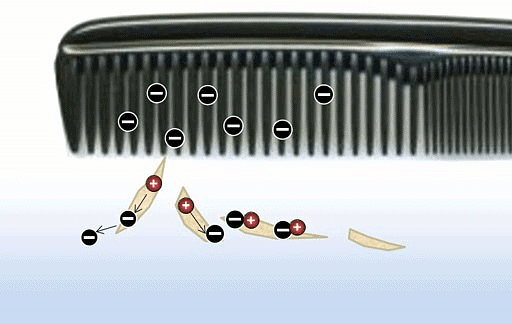 The document Dipole in Uniform & Non-Uniform Electric Field Notes | Study Physics For JEE - JEE is a part of the JEE Course Physics For JEE.
All you need of JEE at this link: JEE
Join Course