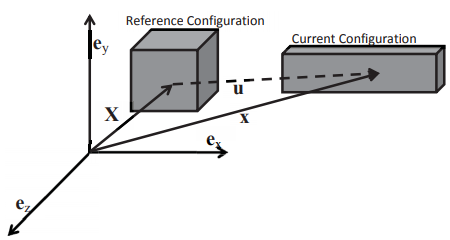 Recognize that these gradients are not the same. To see this, we compute the displacement gradient in terms of the deformation gradient as

Inverting the motion field (3.35) we obtain

Here we have made use of the fact that the same Cartesian basis vectors are used to define both the current and the reference configuration. Next, we compute the deformation gradient to be

and the Lagrangian and Eulerian displacement gradient as

Notice that at t = 0, F ≠ 1, but F tends to 1 as time, t tends to ∞. This just indicates that the configuration chosen as reference is not the one at time t = 0, but at some other time and this is permissible.