Direction is the information contained in the relative position of one point with respect to another point without the distance information. Directions may be either relative to some indicated reference or absolute according to some previously agreed upon frame of reference. 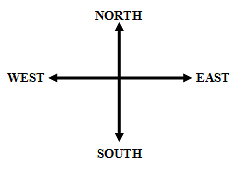 Their initials commonly denote these directions: N, E, S, W. East and West are at right angles to North and South, with east being in the clockwise direction of rotation from north and west being directly opposite east. 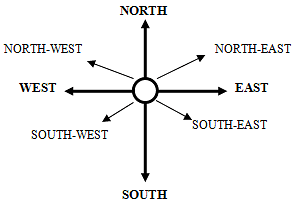 The direction of the top of the page is always considered as North unless specified in the question.

LEFT / RIGHT SIDE OF PARTICULAR DIRECTIONS 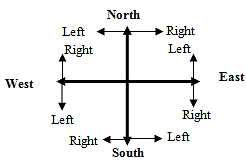 Example 1: Mr Deepak Mohan walks 5 km towards the south and then turns to the right. After walking 3 km he turns to the left and walks 5 km. What direction is he facing right now?

The correct answer is option (b)

The path traced by Deepak Mohan

The right and left movements are with respect to Mr. Deepak Mohan. After walking 5 km towards the South, he takes a right turn and now will be facing West. After walking 3 more km he turns left and walks 5 more km. Now he is facing South. 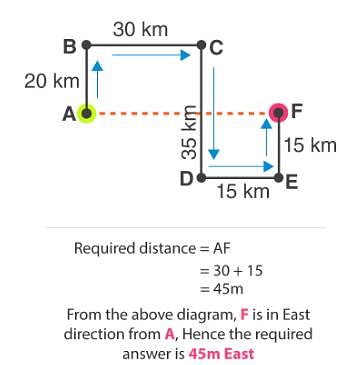 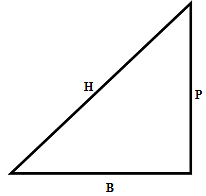 RULES FOR QUESTIONS REGARDING SHADOWS:-

Example 2: One morning after sunrise, Nandita and Ravi were sitting in a lawn with their backs towards each other. Nandita’s shadow fell exactly towards her left-hand side. Which direction was Ravi facing?

The correct answer is option (d)

Since it was morning and Nandita’s shadow fell exactly to her left-hand side, Nandita was facing North and hence Ravi should be facing South.