Strictly speaking, the value of price elasticity varies from minus infinity to approach zero from the negative sign, because

has a negative sign. In other words, since price and quantity are inversely related (with a few exceptions) price elasticity is negative. But, for the sake of convenience, we ignore the negative sign and consider only the numerical value of the elasticity. Thus if a 1% change in price leads to 2% change in quantity demanded of good A and 4% change in quantity demanded of good B, then we get elasticity of A and B as 2 and 4 respectively, showing that demand for B is more elastic or responsive to price changes than that of A. Had we considered minus signs, we would have concluded that the demand for A is more elastic than that for B, which is not correct. Hence, by convention, we take the absolute value of price elasticity and draw conclusions.A fews examples for price elasticity of demand case as follows:

Illustration 2:- A 5% fall in the price of a good leads to a 15% rise in its demand. Determine the elasticity and comment on its value.Solution :- Price elasticity

Illustration 3:- The price of a good decreases from ₹ 100 to ₹ 60 per unit. If the price elasticity of demand for it is 1.5 and the original quantity demanded is 30 units, calculate the new quantity demanded.Solution:- 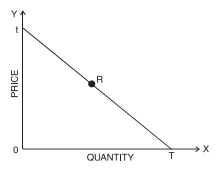 Fig.: 6(a) : Elasticity at different points on the demand curve

Thus, we see that as we move from T towards t, elasticity goes on increasing. At the mid-point it is equal to one, at point t it is infinity and at T it is zero.Arc-elasticity: When the price change is somewhat larger or when price elasticity is to be found between two prices [or two points on the demand curve say, A and B in figure 7], the question arises which price and quantity should be taken as base. This is because elasticities found by using original price and quantity figures as base will be different from the one derived by using new price and quantity figures. Therefore, in order to avoid confusion, generally mid-point method is used i.e. the averages of the two prices and quantities are taken as (i.e. original and new) base. The arc elasticity can be found out by using the formula:

Fig. 8(a) : Demand curve of zero, unitary and infinite elasticity

Fig. 8(b) : Demand curves of greater than one and less than one elasticities

Now that we are able to classify goods according to their price elasticity, let us see whether the goods which we considered in our example on page 2.37, are price elastic or inelastic

Table 5: The Relationship between Price elasticity and Total Revenue (TR)

Determinants of Price Elasticity of Demand: In the above section we have explained what is price elasticity and how it is measured. Now an important question is: what are the factors which determine whether the demand for a good is elastic or inelastic? We will consider the following important determinants of price elasticity(1) Availability of substitutes: One of the most important determinants of elasticity is the degree of availability of close substitutes. Some commodities like butter, cabbage, Maruti Car, Coca Cola, etc. have close substitutes. There are margarine, other green vegetables, Santro or other cars, Pepsi or any other cold drink respectively. A change in the price of these commodities, the prices of the substitutes remaining constant, can be expected to cause quite substantial substitution – a fall in price leading consumers to buy more of the commodity in question and a rise in price leading consumers to buy more of the substitutes. Commodities such as salt, housing, and all vegetables taken together, have few, if any, satisfactory substitutes and a rise in their prices may cause a smaller fall in their quantity demanded. Thus, we can say that goods which typically have close or perfect substitutes have highly elastic demand curves. Moreover, wider the range of substitutes available, the greater will be the elasticity. For example, toilet soaps, toothpastes etc have wide variety of brands and each brand is a close substitute for the other.It should be noted that while as a group, a good or service may have inelastic demand, but when we consider its various brands, we say that a particular brand has elastic demand. Thus, while the demand for a generic good like petrol is inelastic, the demand for Indian Oil’s petrol is elastic. Similarly, while there are no general substitutes for health care, there are substitutes for one doctor or hospital. Likewise, the demand for common salt and sugar is inelastic because good substitutes are not available for these.(2) Position of a commodity in a consumer’s budget: The greater the proportion of income spent on a commodity; generally the greater will be its elasticity of demand and vice- versa. The demand for goods like common salt, matches, buttons, etc. tend to be highly inelastic because a household spends only a fraction of their income on each of them. On the other hand, demand for goods like clothing, tends to be elastic since households generally spend a good part of their income on clothing.(3) Nature of the need that a commodity satisfies: In general, luxury goods are price elastic while necessities are price inelastic. Thus, while the demand for television is relatively elastic, the demand for food and housing, in general, is inelastic. If it is possible to postpone the consumption of a particular good, such good will have elastic demand. Consumption of necessary goods cannot be postponed and therefore, their demand is inelastic.(4) Number of uses to which a commodity can be put: The more the possible uses of a commodity, the greater will be its price elasticity and vice versa. When the price of a commodity which has multiple uses decreases, people tend to extend their consumption to its other uses. To illustrate, milk has several uses. If its price falls, it can be used for a variety of purposes like preparation of curd, cream, ghee and sweets. But, if its price increases, its use will be restricted only to essential purposes like feeding the children and sick persons.(5) Time period: The longer the time-period one has, the more completely one can adjust. A simple example of the effect can be seen in motoring habits. In response to a higher petrol price, one can, in the short run, make fewer trips by car. In the longer run, not only can one make fewer trips, but he can purchase a car with a smaller engine capacity when the time comes for replacing the existing one. Hence one’s demand for petrol falls by more when one has made long term adjustment to higher prices.(6) Consumer habits: If a consumer is a habitual consumer of a commodity, no matter how much its price change, the demand for the commodity will be inelastic.(7) Tied demand: The demand for those goods which are tied to others is normally inelastic as against those whose demand is of autonomous nature. For example printers and ink cartridges.(8) Price range: Goods which are in very high price range or in very low price range have inelastic demand, but those in the middle range have elastic demand.

Knowledge of the price elasticity of demand and the factors that may change it is of key importance to business managers because it helps them recognise the effect of a price change on their total sales and revenues. Firms aim to maximise their profits and their pricing strategy is highly decisive in attaining their goals. Price elasticity of demand for the goods they sell helps them in arriving at an optimal pricing strategy. If the demand for a firm’s product is relatively elastic, the managers need to recognize that lowering the price would expand the volume of sales, and result in an increase in total revenue. On the other hand, if demand were relatively inelastic, the firm may safely increase the price and thereby increase its total revenue as they know that the fall in sales would be less than proportionate. On the contrary, if demand is elastic, a price increase will lead to a decline in total revenue as fall in sales would be more than proportionate. Knowledge of price elasticity of demand is important for governments while determining the prices of goods and services provided by them, such as, transport and telecommunication. Further, it also helps the governments to understand the nature of responsiveness of demand to the increase in prices on account of additional taxes and the implications of such responses on the tax revenues. Elasticity of demand explains why Governments are inclined to raise the indirect taxes on those goods that have a relatively inelastic demand, like alcohol and tobacco products.