Demand for natural is estimated to have been around 10.9 million tones in 2011 out of which around 45 percent was from Asia. About 92 percent of natural rubber is produced from Asian countries. The demand for natural rubber globally is projected to grow by 3-4 percent through 2013 .  Synthetic rubbers have slowly replaced natural rubbers and have undergone various developments for applications in automotives, chemical industry, energy generation, sports, aerospace industry etc.

1820 First planting of rubber in India at Travancore 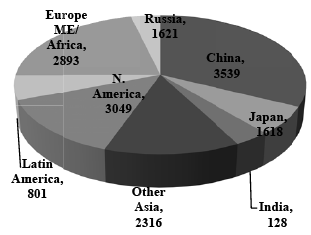 Styrene Butadiene Rubber (Sbr)
Styrene butadiene rubber is most widely used elastomer in the world.SBR is used forboth tire and non-tire application Styrene butadiene rubber known as Buna-S was first prepared by I.G. Farbenindustrie in Germany. There has been significant development in the process technology of styrene butadiene rubber manufacture. Amongst the various processes, emulsion polymerisation of SBR is most commonly used. The cold process of emulsion polymerisation process has replaced the hot polymerisation process. In India, first SBR manufacture was started by Synthetic and Chemicals, Bareilly in 1963, however, the unit has been closed presently.
Although butadiene is recovered from cracker plant, it can be also made from ethanol route. Styrene is made from ethyl benzene by alkylation of benzene with ethylene which can be also recovered from FCC gases.

SBR is made by emulsion polymerisation at 50oC. Initiation occurs through reaction of potassium peroxydisulphate with n-dodecyl mercaptan. Chain propagation occurs by the growing chain free radical of mercaptyl attaching either butadiene or styrene. The reaction is terminated at 60-75 percent of completion. Unreacted butadiene and styrene were recovered. Antioxidant is added followed by coagulation, washing and drying. It is used as elastomer, emulsion and solution. Used in tyres and tyre-related product, mechanical goods, automotive uses, adhesive, shoe products.

SBR is a hard rubber which is uses for soles of shoes, tire treads and other places where durability is important. It is a type of copolymer called a block copolymer. Its backbone chain is made of three segments- first segment polystyrene, second polybutadiene and third polystyrene. Polystyrene is tough hard plastic and this gives SBS its durability. Process flow diagram of SBR Manufacture is given in Figure M-VIII 4.2