Analogous with flow of water and concept of flux 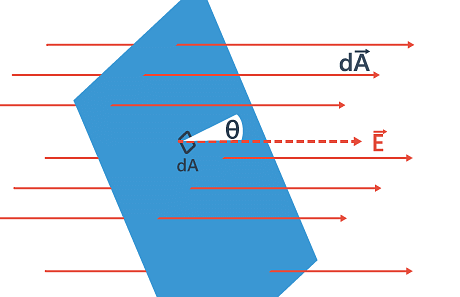 Consider flow of a liquid with velocity v, through small flat surface dA, in a direction normal to the surface. The rate of flow of liquid is given by the volume crossing the area per unit time vdA and represents the flux of liquid flowing across the plane. If the normal to the surface is not parallel to the direction of flow of liquid, i.e., to v, but makes an angle θ with it, the projected area in a plane perpendicular to v is vdA cosθ. Therefore the flux going out of the surface d A isV. ñ dA.

For the case of the electric field, we define an analogous quantity and call it electric flux.

We should however note that there is no flow of a physically observable quantity unlike the case of liquid flow. In the picture of electric field lines described above, we saw that the number of field lines crossing a unit area, placed normal to the field at a point is a measure of the strength of electric field at that point.

Thus, the number of field lines crossing ΔA is proportional to E.ΔA.cosθ. When θ = 90° , field lines will be parallel to ΔA and will not cross it at all (Figure). 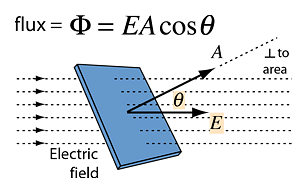 In above diagram, note that: