Electromagnetic wave at the interface between two dielectric media

The propagation of electromagnetic wave in an isotropic, homogeneous, dielectric medium, such as in air or vacuum. In this lecture, we woulddiscuss what happens when a plane electromagnetic wave is incident at the interface between two dielectric media. For being specific, we will take one of the medium to be air or vacuum and the other to be a dielectric such as glass. We have come across this in school in connection with the reflection and transmission of light waves at such an interface. In this lecture, we would investigate this problem from the point of view of electromagnetic theory. 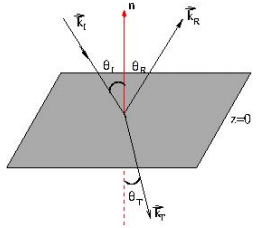 Let us choose the interface to be the xy plane (z=0). The angles of incidence, reflection and refraction are the angles made by the respective propagation vectors with the common normal at the interface.

We have indicated the propation vectors in the apprpriate medium by capital letters I, R and T so as not to confuse with the notation for the position vector

This equation must remain valid at all points in the interface and at all times. That is obviously possible if the exponential factors is the same for all the three terms or if they differe at best by a constant phase factor. Considering, the incident and the reflection terms, we have,

and the normal to the plane is represented by

the equation to the plane is given by

in the x-z plane.

and the normal to the plane

is normal to the interface

are in the same plane, we have,

are in the same medium, though their directions are different, their magnitudes are the same

and hence, we have,

which is the law of reflection.

We will now prove the Snell’s law.

Let us look into the equation

In a fashion similar to the above, we can show that

are in different media, we have, recognizing that as the wave goes from one medium to another, its frequency does not change,

is the velocity of the wave in the transmitted medium. We, therefore, have,

Here n is the refractive index of the second medium with respect to the incident medium.

What happens to the amplitudes of the wave on reflection and transmission? Let us summarize the boundary conditions that we have derived in these lectures. We will assume that both the media are non-magnetic so that the permeability of both media are the same, viz., μ0. The two media differ by their dielectric constant, the incident medium is taken to be air as above. We further assume that there are no free charges or currents on the surface so that both the normal and tangential components of the fields are continuous. We will consider two cases, the first case where the electric fields are parallel to the incident plane. This case is known as p- polarization, p standing for “parallel”. The second case is where the electric field is perpendicular to the incident plane. This is referred to as s- polarization, s standing for a German word “senkrecht “ meaning perpendicular.

In this case, since the magnetic fields are perpendicular to the plane of incidence, we take the directions of the H fields to come out of the plane of the page (the incident plane). Since the electric field, the magnetic field and the direction of propagation are mutually perpendicular being a right handed triad, we have indicated the directions of the electric fields accordingly. It may be noted that in this picture, for the case of normal incidence, the incident and the reflected electric fields are directed oppositely. (The assumption is not restrictive because, if it is not true, a negative sign should appear in the equations ). Taking the tangential components of the electric field (parallel to the interface), we have,

As our medium is linear, we have the following relationship between the electric and the magnetic field magnitudes,

where,  nT and nI  are refractive indices of the transmitted medium and incident medium, respectively, with respect to free space.

are, respectively, the reflection and transmission coefficients for field amplitudes. (Caution : the phrases “reflection/transmission” coefficients are also used to denote fraction of transmitted intensities.)

i.e. if the angle between the reflected ray and the transmitted ray is 900 , the reflection coefficient for the parallel polarization becomes zero, because

If we had started with an equal mixture of p polarized and s polarized waves (i.e. an unpolarized wave), the reflected ray will have no p component, so that it will be plane polarized. The angle of incidence at which this happens is called the Brewster’s angle”.

For this angle, we have

The following figure (right) , the red curve shows the variation in the reflected amplitude with the angle of incidence for p-polarization. The blue curve is the corresponding variation for s – polarization to be discussed below. 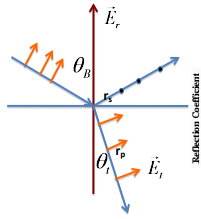 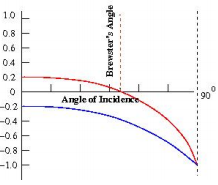 The corresponding directions of the magnetic field is shown in the figure. The boundary conditions give

Using Snell’s law, we can simplify these expressions to get,

Let us return back to the case of p polarization and consider the case where in the incident medium has a higher refractive index than the transmitted medium. In this case, we can write the amplitude reflection coefficient as

Substituting Snell’s law into the above, we have,

we can write the above as

since n <1. we therefore write,

In a very similar way, we can show that the reflection coefficient for s polarization can be expressed as follows:

It may be seen that for

the magnitudes of both

are both equal to unity because for both these, the numerator and the denominator are complex conjugate of each other. Thus it implies that when electromagnetic wave is incident at an angle of incidence greater than a “critical angle”defined by

where n here represents the refractive index of the (rarer) transmitted medium with respect to the(denser) incident medium , the wave is totally reflected. (In text books on optics, the critical angle is defined by the relation

because the refractive index there is conventionally defined as that of the denser medium with respect to the rarer one).

In case of total internal reflection, is there a wave in the transmitted medium? The answer is yes, it does as the following analysis shows.

Let us take the incident plane to be xz plane and the interface to be the xy plane so that the normal to the plane is along the z direction. The transmitted wave can be written as

The space part of the wave can be expressed as

where, we define “propagation vector “ β as

and the “attenuation factor” α as

With this, the wave in the transmitted medium becomes,

which shows that the wave in the second medium propagates along the interface. It penetrates into the medium but its amplitude attenuates exponentially. This is known as “evanescent wave”.

The amplitude variation with angle of incidence is shown in the following figure. 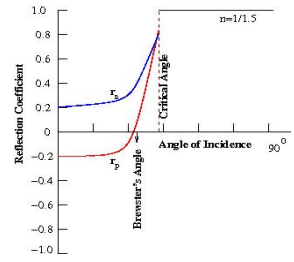 What is the propagation vector?

Recall that the magnitude of the propagation vector is defined as

where the “wavelength” λ is the distance between two successive crests or troughs of the wave measured along the direction of propagation. However, consider, for instance, a water wave which moves towards the shore. Along the shore, one would be more inclined to conclude that the wavelength is as measured by the distance between successive crests or troughs along the shore. This is the wavelength with which the attenuating surface wave propagates in the second medium.

No transfer of energy into the transmitted medium:

Though there is a wave in the transmitted medium, one can show that on an average, there is no transfer of energy into the medium from the incident medium.

Consider, p polarization, for which the transmitted electric field, being parallel to the incident (xz) plane is along the x direction.

From this we obtain the H- field using Faraday’s law, Since the H field is taken perpendicular to the electric field , it would be in the y-z plane . Taking the components of

so that the average power transferred into the second medium is

Since the normal to the surface is along the z direction, the average energy transferred to the second medium is zero.

1. The wave is propagating along the + z direction (before reflection). The electric field is given by Maxwell- Ampere law,

direction, and its y-component depends on z only, the curl is given by

The Poynting vector is given by

The time average Poynting vector is

Since the wave is totally reflected, the change in momentum is twice the initial momentum carried. Thus the pressure is given by

At the metallic interface (z=0), the tangential component of the electric field is zero. Since the wave is totally reflected, the reflected wave must have oppositely directed electric field, i.e. in

direction. The direction of propagation having been reversed, the magnetic the field is given by

At the interface the total magnetic field is

The surface current can be determined by taking an Amperian loop perpendicular to the interface, Taking the direction of the loop parallel to the magnetic field, the line integral is seen to be

2. The electric field is given by

As the wave is propagating in the z direction, the corresponding magnetic field is given by

The individual components have average Poynting vectors given by

1. The electric field of a plane electromagnetic wave propagating in free space is described by

Determine the corresponding magnetic field and the time average Poynting vector for the wave.

2. Show that an s –polarized wave cannot be totally transmitted to another medium.

3. An electromagnetic wave given by

is incident on the surface of a perfect conductor and is totally reflected. The incident and the reflected waves combine and form a pattern. What is the average Poynting vector?

1. The wave is propagating in +x direction so that the propagation vector is

Using Faraday’s law, we have,

which gives magnetic field directed along the z direction,

The Poynting vector is given by

The time average of the Poynting vector is

From Snell’s law, we have,

Squaring and adding, we get

which is not correct.

3. The incident wave is

Since the tangential component of the electric field must vanish at the interface (z=0), the reflected wave us given by

The corresponding magnetic fields are given by

The individual Poynting vectors can be calculated and on adding it will turn out that the average Poynting vector is zero. The waves of the type obtained by superposition of the two waves have the structure,

where the space and time parts are separated. These are known as “standing waves” and they do not transport energy.