Propagation of Electromagnetic Waves in a Conducting Medium

We will consider a plane electromagnetic wave travelling in a linear dielectric medium such as air along the z direction and being incident at a conducting interface. The medium will be taken to be a linear medium. So that one can describe the electrodynamics using only the E and H vectors. We wish to investigate the propagation of the wave in the conducting medium.

As the medium is linear and the propagation takes place in the infinite medium, the vectors

Consider the pair of curl equations of Maxwell.

to be respectively in x, y and z direction. We the nhave,

We take the time variation to be harmonic

so that the time derivative is equivalent to a multiplication by

We can solve this pair of coupled equations by taking a derivative of either of the equations with respect to z and substituting the other into it,

Define, a complex constan γ through

In an identical fashion, we get

Solutions of (3) and (4) are well known and are expressed in terms of hyperbolic functions,

In order to determine the constants B and D, let us return back to the original first order equations (1) and (2)

Substituting the solutions for E and H

This equation must remain valid for all values of z, which is possible if the coefficients of sinh and cosh terms are separately equated to zero,

Substituting these, our solutions for the E and H become,

The wave is propagating in the z direction. Let us evaluate the fields when the wave has reached

If ℓ is large, we can approximate

Suppose we have lossless medium, σ=0, i.e. for a perfect conductor, the characteristic impedance is

If the medium is vacuum,

gives η≈377Ω. The characteristic impedance, as the name suggests, has the dimension of resistance.

Let us look at the full three dimensional version of the propagation in a conductor. Once again, we start with the two curl equations,

Take a curl of both sides of the first equation,

As there are no charges or currents, we ignore the divergence term and substitute for the curl of H from the second equation,

We take the propagating solutions to be

so that the above equation becomes,

so that we have, the complex propagation constant to be given by

k is complex and its real and imaginary parts can be separated by standard algebra,

The speed of electromagnetic wave is given by

The electric field amplitude diminishes with distance as

The distance to which the field penetrates before its amplitude diminishes be a factor e-1 is known as the “skin depth” , which is given by

The wave does not penetrate much inside a conductor. Consider electromagnetic wave of frequency 1 MHz for copper which has a conductivity of approximately

Substituting these values, one gets the skin depth in Cu to be about 0.067 mm. For comparison, the skin depth in sea water which is conducting because of salinity, is about 25 cm while that for fresh water is nearly 7m. Because of small skin depth in conductors, any current that arises in the metal because of the electromagnetic wave is confined within a thin layer of the surface.

Reflection and Transmission from interface of a conductor

Consider an electromagnetic wave to be incident normally at the interface between a dielectric and a conductor. As before, we take the media to be linear and assume no charge or current densities to exist anywhere. We then have a continuity of the electric and the magnetic fields at the interface so that

the minus sign in the second relation comes because of the propagation direction having been reversed on reflection.

Solving these, we get,

The magnetic field expressions are given by interchanging η1 and  η2 in the above expressions. 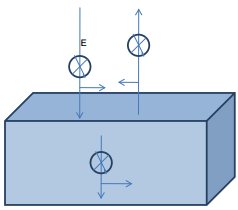 Let us look at consequence of this. Consider a good conductor such as copper. We can see that η2 is a small complex number. For instance, taking the wave frequency to be 1 MHz and substituting conductivity of Cu to be

we can calculate η2 to be approximately

whereas the vacuum impedance η1= 377 Ω. This implies

which shows that a good metal is also a good reflector. On the other hand, if we calculate the transmission coefficient we find it to be substantially reduced, being only about

For the transmitted magnetic field, the ratio

is approximately +2. Though E is reflected with a change of phase, the magnetic field is reversed in direction but does not undergo a phase change. The continuity of the magnetic field then requires that the transmitted field be twice as large.

where ks is the surface current density.

Assuming that the current flows over the skin depth, one can write, for the current density, (assuming no reflection from the back of this depth)

Since the current density has been taken to decay exponentially, we can extend the integration to infinity and get

The current density at the surface can be written as

For a good conductor, we have,

The current profile at the interface is as shown.

The ratio of conductivity σ ω∈ is 1.73 which says it is neither a good metal nor a good dielectric. The propagation constant β and the attenuation constant α are given by,

2. The case of p polarization is shown. 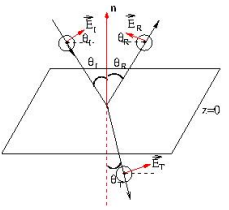 Let the incident plane be y-z plane. Let us look at the magnetic field. We have, since both the incident and the reflected fields are in the same medium,

Let us write the incident magnetic field as

The reflected magnetic field is given by

Since the tangential components of the electric field is continuous, we have,

Thus the total magnetic field can be written as

The electric field has both y and z components,

The reflected electric field also has both components,

Adding these two the total electric field, has the following components,

1. From the text, we see that the ratio of electric field to magnetic field is given by

For a good conductor, we can approximate this by

The ratio of conductivity

3. The direction of electric and magnetic field for s polarization is as shown below. 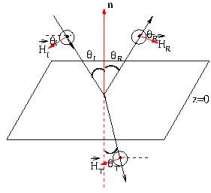 taken along the x direction and is given by

The minus sign comes because at z=0, for any y, the tangential component of the electric field must be zero.

The total electric field is along the x direction and is given by the sum of the above,

The magnetic field has both y and z components.