At first glance, one might think that there is only one possible transition for the d-electrons in an octahedral compound with a d2 configuration when it absorbs light. That transition would be one of the electrons in a t2g orbital raising in energy to one of the eg orbitals. One example of this is shown below (Figure  5.9.1 ). This might lead you to think there is only one band (peak) in the visible absorption spectrum for d2 complexes, but that is not the case. In order to explain the additional bands, there would have to be other possible transitions. Perhaps you might think that since the electrons in the t2g orbitals are equal in energy either of them could move to the eg. Similarly, the eg orbitals are degenerate, so the electron could go to either of those orbitals. That could give multiple transitions, but they would all be the same energy as the one depicted.

What other transitions would be possible? The state shown above depicts the ground state electron configuration of a d2 system. Remember back to general chemistry, the ground state follows Hund's rule in that the electrons are spread out and have the same spin. There are multiple possible excited states and these do not have to abide by Hund's rule, but they still must follow the Pauli exclusion principle. Several possible excited state configurations.

To help keep track of all of the possible transitions, we use Term Symbols. Term Symbols are a method of accounting for electron-electron interactions in an atom. They are derived from the quantum numbers, in particular the values of ml and ms, associated with the electrons of interest. These term symbols take the form 2S+1LJ, where S represents the total spin angular momentum, L specifies the total orbital angular momentum, and J refers to the total angular momentum. How do we get these term symbols? The value of S comes from the sum of the ms values for the electrons under consideration. As has typically been the case since general chemistry, the first electron we place is spin up or + 1/2 . So for the ground state shown in (Figure  5.9.1 ) the value of S would be +1. The value of 2S+1 is called the multiplicity and in this example the multiplicity would equal three. This is referred to as a triplet or triplet state.  The value of L comes from the sum of the ml values. In the case above we are looking at d-orbitals. The possible ml values are +2, +1, 0, -1 and -2. Standard practice is to begin filling the orbital with the highest value of ml working to the lowest value. So for the ground state d2 system, one electron would have a ml or +2 and the other would be +1 giving a total of +3 as the value for L. However, L is not represented by this value, but rather a letter. This system is very similar to that used for the naming of atomic orbitals; an atomic orbital with an l value of 0 is an s-orbital while a term symbol with a L value of 0 would be an S term. This follows the same order as we learned for atomic orbitals, but it is very easy to get L values greater than 3, so after S, P, D, F the order proceeds G, H, K, I, etc. So far, this would make our ground state term for the d2 system a 3F term. The final value in the term symbol is J (which is why the letter J was skipped in the list above). This value comes from combinations of L and S.The term symbols just described are known as free ion terms. This means we would be thinking about a d2 metal ion in the gas phase. Things change a bit when you consider a metal with ligands. We move from the free ion terms to symbols that come from group theory. We also now have to deal with a wide range of ligands from weak field to strong field. As the ligands impact the separation of the t2g and eg orbitals, they should have an impact on the absorption of the complex. Doing much more with Term symbols is beyond the scope of this course. However, they do appear in the discussion below so it is important you have some appreciation of their source.

In most cases the ligand field strength is in between the very weak and very strong case, and thus, we could expect very complicated spectra. Fortunately, nature does not make things quite as complicated, because not all possible electron transitions are quantum-mechanically allowed. The allowed transitions are defined by two rules: The spin selection rule and the Laporte rule.The spin selection rule states that only transitions are allowed in which the total spin quantum number S does not change. Another way to say this is that only transitions between states with the same multiplicity are allowed. For example, it would be allowed to excite an electron from a triplet term to another triplet term, but not from a triplet term to a doublet or singlet term.The Laporte rule state that transitions are only allowed when there is a change of parity. To fully appreciate this, we must define the terms gerade (symmetric with respect to inversion) and ungerade (not symmetric with respect to inversion). In thinking about this in terms of atomic orbitals, s-orbitals are completely spherical and as such are gerade. While it might take a little more to visualize it, d-orbitals are also gerade. On the other hand, p-orbitals, with the lobes having different signs are ungerade. This means that transitions between d-orbitals should not be allowed by the Laporte rule. However, in an octahedral geometry, it is possible that some terms may have a change in parity. So overall, a transition from a gerade (g) to an ungerade (u)-term and vice versa is possible, but not a transition from a g-term to another g-term, or the transition from a u-term to another u-term. For example the transition from a T2g to a T1u term would be allowed, but not the transition from a T2g to a T1g term. 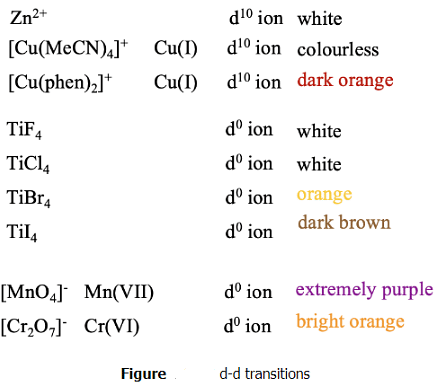 We are still not done with our electronic spectra. Thus, far we have only considered transitions of d-electrons between d-orbitals, and their terms. They are called d-d transitions. However, there are also so-called charge transfer transitions possible, that are not d-d transitions. We can easily see that there must be other transitions but d-d transitions when we look at the color of d10 and d0 ions. For those, the are no d-d transitions possible. Therefore, they all should be colorless. However, that is not always true. Some of these ions are indeed colorless, but some are not. For example, Zn2+, a d10 ion are always colorless in complexes, but not Cu(I) which is also d10. While tetrakis(acetonitrile)copper (+) is colorless, bis(phenanthrene) copper(+) is dark orange.  Similar is true for d0 ions. While TiF4 and TiCl4 are colorless, TiBr4 is orange, and TiI4 is brown. Some d0 species are even extremely colorful, for example permanganate with Mn7+ which is extremely purple, and dichromate with Cr(VI) which is bright orange. 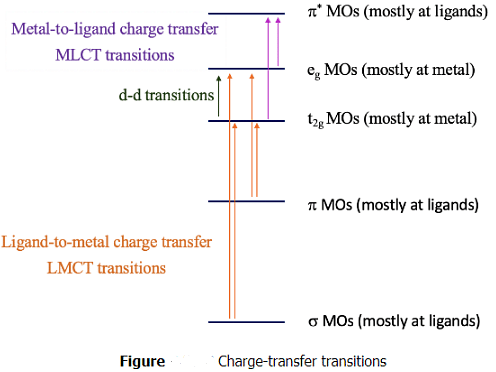 Can we predict when the energy windows between the bonding molecular orbitals and the metal d-orbitals are small enough so that LMCT transitions in the visible can take place?  Generally, it would be desirable if the energy of the metal orbitals was as low as possible and the energy of the bonding ligand orbitals are as high as possible. The energy of metal d-orbitals decreases with increasing positive charge at the metal because the effective nuclear charge on the metal increases. This means that very high oxidation states favor an LMCT transition. The d-orbitals should have few or no electrons, so that electrons can be promoted into the orbitals, and orbital energy increase due to electron-electron repulsion is minimized. Examples are Mn(VII), Cr(VI), and Ti(IV). The energy of MOs from bonding ligand orbitals increases when the ligand orbitals have high energy this is typically the case for π-donor ligand with negative charge. 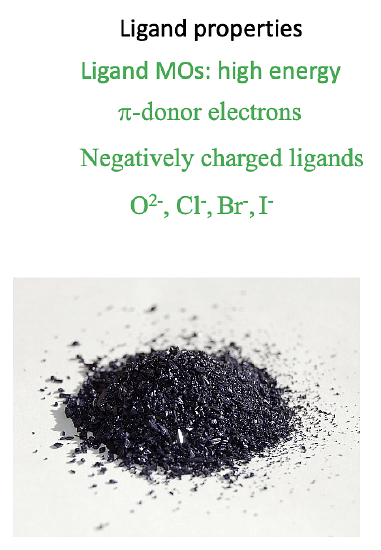 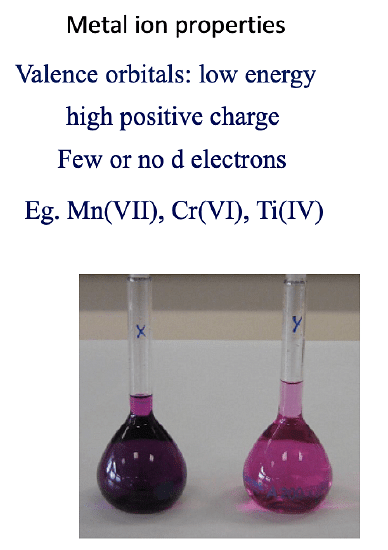 Figure :- The properties of the metal ion and ligands in MnO4-

Examples of ligands are oxo- and halo ligands. This explains for example the LMCT transitions in permanganate. The Mn is in the very high oxidation state +7, and the ligands are are oxo-ligands wich are π-donors with a 2- negative charge. The transitions are both Laporte and spin-allowed leading to very high intensity of light absorption, and thus color.

What are favorable metal ion and ligand properties for a metal-to-ligand transition, then? In this case we would like to keep the energy of the metal orbitals as high as possible so that the energy difference between a metal d-orbital and a π*-orbital is minimized. This is accomplished when the positive charge at the metal ion is small, and there are many d-electrons that can repel each other, thereby increasing orbital energies, for examples Cu(I). 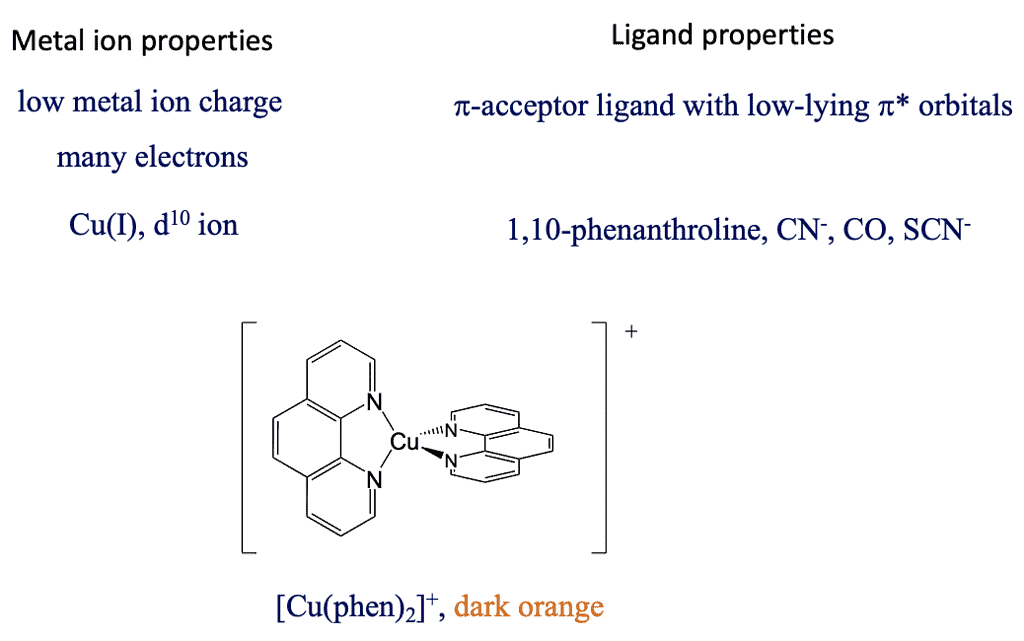 The ligand should be a π-acceptor with low-lying π*-orbitals, for example phenanthroline, CN-, SCN-, and CO. For instance, the bis(phenanthroline) copper(+) is dark-orange and has a MCLT absorption band a 458 nm. Also, the MLCT transfer is both spin and Laporte-allowed.It should be mentioned that some complexes allow for both metal-to-ligand and ligand to metal transitions. For example, in the Cr(CO)6 complex the σ-orbitals are high enough and the π*-orbitals are low enough in energy to allow for light absorption in the visible range. Finally, also intraligand bands are possible when the ligand is a chromophore.