We will define another useful operator, known as the Laplacian operator, which is a second order differential operator acting on a scalar field (and with some conventional usage on a vector field). This operator is denoted by

A class of functions, known as “Harmonic Functions” satisfy what is known as the Laplacian equation,

In electromagnetic theory, in particular, one often finds

operator acting on a vector field. As has been explained above, a Laplacian can only act on a scalar field. However, often we have equations where the Laplacian operator acts on components of a vector field, which are of course scalars. Thus

is used as a short hand notation, which actually means

are the components of the vector field

directions. Thus, in Cartesian coordinates, we have

frequently used. Here is a list of them. They are not proved here but you are strongly advised to prove some of them.

This is obvious because

represents a conservative field, whose curl is zero.

This operator identity is very similar to the vector triple product. (for ordinary vectors, we have

where both f and are scalar fields.

We will now derive two important identities which go by the name Green’s identities.

be single valued and continuously differentiable inside a volume V bounded by a surface S. By divergence theorem, we have

are two scalar fields, then we get, using the relation (5) above,

This is known as Green’s first identity. By interchanging

Equation (3) is Green’s second identity and is also known as the Green’s Theorem.

An important result for the vector fields is that in a region of volume V defined by a closed surface S, a vector field is uniquely specified by

1. its divergence2. its curl and3. its normal component at all points on the surface S.

This can be shown by use of the Green’s theorem stated above. Consider two vector fields

which are specified inside such a volume and let us assume that they have identical divergences, curl as also identical values at all points on the defining surface. The uniqueness theorem implies that the two vector fields are identical.

To see this let us define a third vector

By the properties that we have assumed for

is a conservative field and hence can be expressed as a gradient of some potential. Let

The equality of the divergences of

implies that the divergence of

which, in turn, implies that

the Laplace’s equation at every point inside the volume V.

The third property, viz., the identity of the normal components of

at every point on S implies that the normal component of

Let us use Green’s first identity , given by eqn. (1) above taking

everywhere on the surface. Thus we have,

everywhere on the surface, it gives

Since an integral of a function which is positive everywhere in the volume of integration cannot be zero unless the integrand identically vanishes, we get

Before we conclude our discussion of the mathematical preliminaries, we would introduce you to a very unusual type of function which is known as Dirac’s δ function. In a strict sense, it is not a function and mathematicians would like to call it as “generalized function” or a “distribution”. The defining properties of a delta function are as follows :

In the last relation, it is to be noted that the limits of integration includes the point where the argument of the delta function vanishes. Note that the function is not defined at the point x=0. It easily follows that if we take a test function f(x) , we have

How do we then understand such a function? The best way to look at a delta function is as a limit of a sequence of functions. We give a few such examples.

1. Consider a sequence of functions defined as follows :

For a fixed n, it represents a rectangle of height n, spread from

The figure below sketches a few such rectangles. As n becomes very large, the width of the rectangle decreases but height increases in such a proportion that the area remains fixed at the value 1. As n → ∞ the width becomes zero but the area is still finite. This is the picture of the delta function that we talked about.

2. As second example, consider a sequence of Gaussian functions given by

These functions are defined such that their integral is normalized to 1,

for any value of σ. For instance, if we take σ to be a sequence of decreasing fractions 1,1/2,

which are fast decreasing functions and the limit of these when σ approaches zero is zero provided x ≠ 0. Note, however, the value of the function at x=0 increases with decreasing σ though the integral remains fixed at its value of 1. 3. A third sequence that we may look into is a sequence of “sinc” functions which are commonly met with in the theory of diffraction

Note that as ∈  becomes smaller and smaller, the width of the central pattern decreases and the function gets peaked about the origin. Further, it can be shown that

is a representation of the delta function in the limit of One can prove this as follows:

where we have set

to arrive at the last result. It may be noted that the integrals above are convergent in their usual sense because sin (nx) does not have a well defined value for

4. An yet another representation is as a sequence of Lorentzian functions

Some properties of δ- functions which we state without proof are as follows:

We end this lecture by summarizing properties of cylindrical and spherical coordinate systems that we have been using (and will be using) in these lectures. 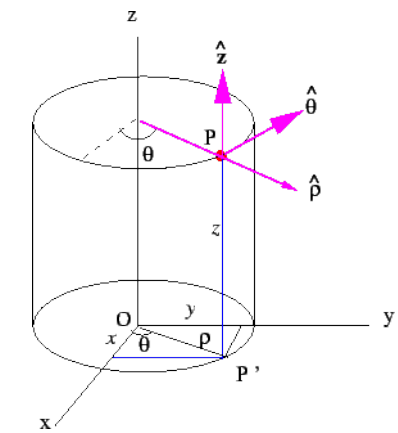 An arbitrary line element in this system is

Another important quantity is the volume element. This is obtained by multiplying a surface elent in the ρ−θ plane with dz. And is given by

For systems showing spherical symmetry, it is often convenient to use a spherical polar coordinates. The variables

and the associated unit vectors are shown in the figure. To define the coordinate system, choose the origin to be at the centre of a sphere with the Cartesian axis defined, as shown. An arbitrary point P is on the surface of a sphere of radius r so that OP=r, the radially outward direction OP is taken to be the direction of the vector

varies from 0 to π. The azimuthal angle φ is fixed as follows. We drop a perpendicular PP’ from P onto the xy plane. The foot of the perpendicular P’ lies in the xy plane. If we join OP’, the angle that OP’ makes with the x-axis is the angle φ Note that as the point P moves on the surface of the sphere keeping the angle θ fixed, i.e. as it describes a cone, the angle φ increases from a value 0 to 2π. The relationship between the spherical polar and the Cartesian coordinates is as follows :

The volume element in the spherical polar is visualized as follows : 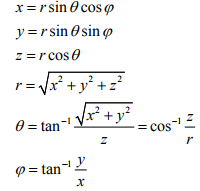 In three dimensions, the delta function is a straightforward generalization of that in one dimension

Where the region of integration includes the position

Example : In electrostatics we often use the delta function. In dealing with a point charge located at the origin, one comes up with a situation where one requires the Laplacian of the Coulomb potential, i.e. of 1/r. In the following we obtain

Since the function does not have angular dependence we get, by direct differentiation, for r ≠ 0,

This is obviously not valid for r=0. To find out what happens at r=0, consider, integrating

over a sphere of radius R about the origin. R can have any arbitrary value. We have using, the divergence theorem,

on the surface. We then have

1. Calculate the Laplacian of

5. Find the Laplacian of the vector field

2. In cylindrical coordinates, the z-axis is the same as in Cartesian. Thus we need to only express

in polar coordinates and add

to the result. We have

We can thus write,

One can similarly calculate

and show that it is given by

The second derivative with respect to

adding the second differentiation with respect to y and z (which can be written by symmetry), we get

Where we have used

5. The Laplacian of a vector field is

2. Find the Laplacian of

Answer to Self Assessment Quiz

we get the result to be

is not in the limits of integration. The result is

is inside the limit of integration. Thus the result is