The document Energy of a Satellite Class 11 Notes | EduRev is a part of the Class 11 Course Physics Class 11.
All you need of Class 11 at this link: Class 11

6.2 Energies of a Satellite in a Circular Orbit

When there is a satellite revolving in a stable circular orbit of radius r around the earth, its speed is given by above equation. During its motion the kinetic energy of the satellite can be given as

As gravitational force on satellite due to earth is the only force it experiences during motion, it has gravitational interaction energy in the field of earth, which is given as

The above relation in magnitude of total, kinetic and potential energies of a satelline is very useful in numerical problem so it is advised to keep this relation in mind while handing satellite problems related to energy.

Now to understand satellite and planetary motion in detail, we take few example.

Sol. Here the revolving speed of earth can be given as

Where M is the mass of sun and r is the orbit radius of earth.

We known time period of earth around sun is T = 365 days, thus we have

Ex.10 If the earth be one-half of its present distance from the sun, how many days will be in one year ?

Sol. If orbit of earth's radius is R, in previous example we've discussed that time period is given as

From above equations, we have

Ex.11 A satellite revolving in a circular equatorial orbit of radius r = 2.00 × 104 km from west to east appear over a certain point at the equator every t = 11.6 hours. Using this data, calculate the mass of the earth. The gravitational constant is supposed to be known.

Sol. Here the absolute angular velocity of satellite is given by

Where wE is the angular velocity of earth, which is from west to east.

From Kepler's III law, we have

Ex.12 A satellite of mass m is moving in a circular orbit of radius r. Calculate its angular momentum with respect to the centre of the orbit in terms of the mass of the earth.

Sol. The situation is shown in figure 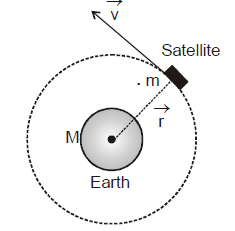 In case of circular orbit, the angle between  and  is 90°. Hence

The direction is perpendicular to the plane of the orbit.

We know orbital speed of satellite is

Now we will understand the concept of double star system through an example.

Sol. The centre of mass of double star from mass m1 is given by

Distance of centre of mass from m2 is

Both the stars rotate around centre of mass in their own circular orbits with the same angular speed ω. 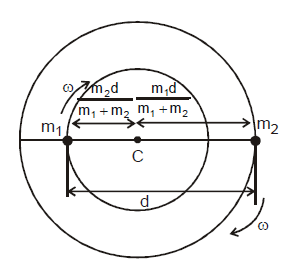 the gravitational force acting on each star provides the necessary centripetal force. if we consider the rotation of mass m1, then

or Period of revolution

Ratio of Angular Momenta is

Ratio of kinetic energies is

7. Motion of a Satellite in Elliptical Path

Consider a body (satellite) of mass m in a circular path of radius r around the earth as shown in figure. we've discussed that in circular path the net gravitational frame on body is exactly balancing the centrifugal force on it in radial direction relative to a rotating frame with the body.

If suddenly the velocity of body decreases then the centrifugal force on it becomes less then the gravitational force acting on it and due to this it can not continue in the circular orbit and will come inward from the circular orbit due to unbalanced force. Mathematical analysis shown that this path-I along which the body is now moving is an ellipse. The analytical calculations of the laws for this path is beyond the scope of this book. But it should be kept in mind that if velocity of a body at a distance r from earth's centre tangential to the circular orbit is less than  then its path will be elliptical with earth centre at one of the foci of the ellipse.

Similarly if the speed of body exceeds  then it must move out of the circular path due to unbalancing of forces again but this time Fe > Fg. Due to this if speed of body is not increased by such a value that its kinetic energy can take the particle to infinity then it will follow in a bigger elliptical orbit as shown in figure in path-II, with earth's at one of the foci of the orbit.

In above case when speed of body was decreased and its value is lesser than  and the speed is decreased to such a value that the elliptical orbit will intersect the earth's surface as shown in figure, then body will follow an arc of ellipse and will fall back to earth.

We've discussed that when a body is in bounded orbit around a planet it can be in circular or elliptical path depending on its kinetic energy at the time of launching. Lets consider a case when a satellite is launched in an orbit around the earth.

A satellite S is first fired away from earth source in vertical direction to penetrate the earth's atmosphere. When it reaches point A, it is imparted a velocity in tangential direction to start its revolution around the earth in its orbit.

This velocity is termed as insertion velocity, if the velocity imparted to satellite is  then it starts following the circular path shown in figure. If velocity imparted is v1 > v0 then it will trace the elliptical path shown. During this motion the only force acting on satellite is the gravitational force due to earth which is acting along the line joining satellite and centre of earth.

As no external force is involved for earth-satellite system, no external work is being done here so we can also state that total mechanical energy of system also remains conserved.

Using the above relations in equation written above we can find velocities v1 and v2 of satellite at nearest and farthest locations in terms of r1 and r2.