The document Equations of Motion and Graphs of Motion Class 9 Notes | EduRev is a part of the Class 9 Course Science Class 9.
All you need of Class 9 at this link: Class 9

These equations give a relationship between initial velocity, final velocity, time taken, acceleration and distance travelled by the bodies.

A body having an initial velocity 'u' acted upon by a uniform acceleration 'a' for time 't' such that final velocity of the body is 'v'.

It gives the distance travelled by a body in time t.

A body having an initial velocity 'u' acted upon by a uniform acceleration 'a' for time 't' such that final velocity of the body is 'v' and the distance covered is 's'.

The average velocity is given by :-

Where ; s = distance travelled by the body in time t

u = initial velocity of the body

A body having an initial velocity 'u' moving with a uniform acceleration 'a' for time 't' such that final velocity 'v' and the distance covered is 's'. the third equation of motion is v2 = u2 + 2at. it gives the velocity acquired by a body in travelling a distance s.

A graph is a line, straight line or curved, showing the relation between two variable quantities of which one varies as a result of the change in the other.

When the body is at Rest

When position of the body does not change with time then it is said to be stationary, the distance-time graph of such a body is a straight line parallel to x-axis.

Distance-time graph for a Stationary Body

When the body is in Uniform Speed

When the position of the body changes by equal intervals of time then body is said to be moving with uniform speed. The distance-time graph of such a body is a straight line, inclined to x-axis. 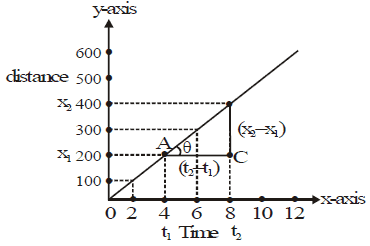 In uniform motion along a straight line the position x of the body at any time t is related to the constant velocity as,xA = vt Starting form zeroxB = x0 + vt starting from x0 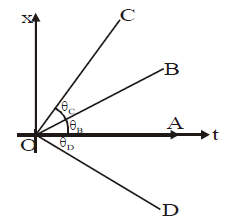 When the Speed Decreases with Passage of Time

Important Note: A distance time graph can never be parallel to y-axis (representing distance) because this line has slope of 90° and slope = tanθ = tan90° = infinite, which means infinite speed. It is impossible. For line A : A straight line displacement-time graph represents a

for line B : A curved displacement-time graph rising upward represents an increasing velocity and positive acceleration

Note: Since the graph takes into account, only the magnitude hence velocity-time graph is not different from speed-time graph.

When the body is moving with Constant Velocity

When the body moves with constant velocity i.e. its motion is uniform.

The speed or velocity of the body is uniform hence the magnitude remains same. The graph is a straight line parallel to x-axis (time-axis). Since the velocity is uniform. Its acceleration is zero. The slope of the graph in this case is zero.

Conclusion: Velocity-time graph of a body moving with constant velocity is a straight line parallel to time axis.

When the body is moving with Uniform Acceleration The speed or velocity-time graph is not a straight line but is a curve. Note: Speed or velocity-time graph line can never be paralled to y-axis (speed axis), because slope angle becomes 90° than tan90° is infinite it is impossible.

Distance or Displacement from Speed or Velocity-time Graph.

When Speed or Velocity is Uniform (or Constant) Thus, We find that the area enclosed by velocity-time graph and the time axis gives the distance travelled by the body.

When Acceleration is Uniform (or Constant) 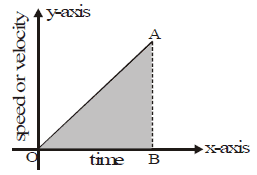 When Speed or Velocity as well as Acceleration is Non-uniform (or Variable). The speed-time graph of a body moving irregularly with variable speed and acceleration. For a small interval of time Δt, as there is not much change in speed, hence the speed can be taken as constant.For this small time interval.Distance Δs = vΔt = Area of the blackened strip.For whole time interval between t1 and t2, distance = sum of areas of all the strips, between t1 and t2 = area of shaded figure ABCD.

A number of useful results can be deduced from velocity time graph.

Equations of Motion by Graphical Method Derivation of Velocity-time Relation (v = u + at)

Acceleration = slope of the graph line BC.

Derivation of Position-Velocity Relation (v2= u2 + 2as)

From the velocity-time graph distance covered = Area of trapezium ABCE

Substituting the value of t in eq (i)