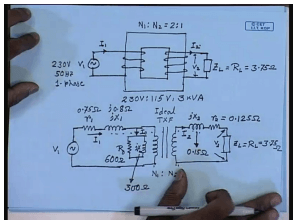 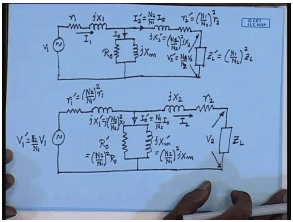 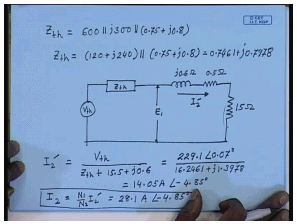 Therefore Z t h is equal to 600 parallel j 300 parallel 0.75 plus j 0.8. In other words Z t h equal to 120 plus j 240 parallel with 0.75 plus j 0.8, and if this is computed Z t h comes to be 0.7461 plus j 0.7978. So, what will be I 2 dash in this circuit? I 2 dashed will be; so what is the Thevenin equivalent circuit let us first see. The Thevenin equivalent circuit becomes V t h in series with Z t h in series with rest of the circuit. Please note that if this voltage in the actual circuit was E 1 the voltage at this terminal will also be E 1. Since E 1 equal to I 2 dashed into this complete impedance here also E 1 equal to I 2 dashed into this impedance, and this impedance do not change because only the input side has been changed.So, what will be I 2 dash? I 2 dash will be equal to v Thevenin divided by z Thevenin plus sum of these impedances which is 15.5 plus j0.6. This will be equal to 229.1 angle 0.07 degrees; thats what we have found for V t h previously, and the total impedance will be 16.2461 plus j1.3978, and this comes to be 14.05 amperes at an angle of minus 4.85 degree with respect to the primary applied voltage. Now I 2, how much is I 2? I 2 equal to N 1 by N 2 into I 2 dash; hence, I 2 is 28.1 ampere at an angle of minus 4.85 degree with respect to the input applied voltage. Therefore, we have found answer to one of the problems; that is we have found what is the output current? So, what is the output voltage? For that we will calculate what is V 2 dash? V 2 dash is nothing but I 2 dash into load resistance. 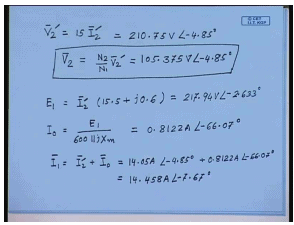 So, therefore, to find out the source current I 1 we should go back to the original equivalent circuit where before we took the Thevenin equivalent circuit. Therefore I 1 is given by I 2 dash plus I 0, phasor sum of I 2 dashed and I 0; that is we have found out I 2 dashed to be 14.05 ampere angle minus 4.85 degrees, and I 0 to be 0.8122 ampere angle at minus 66.07 degrees. Therefore, if we do the computation I 1 will come as 14.458 amperes angle minus 7.67 degrees. So, that shows how to use this equivalent circuit to compute different variables voltages and currents at different parts of the transformer. And it will be interesting to solve the same problem using this equivalent circuit referred to the secondary, but this is left as an exercise.

However, the purpose of solving this problem was not just to show how this problem can be solved. I would like to draw your attention to a few salient features of this equivalent circuit. For example, let us see the applied voltage; the applied voltage was 230 volt at an angle of 0 degree while when we computed the Thevinin voltage it comes to something like 229.1 volt angle 0.07 degrees. Now is this very different from the actual applied voltage? Similarly the Thevinin impedance Z t h comes to 0.7461 plus j 0.7978. If you look at the actual primary impedance it was 0.75 ohm and 0.8 ohm here; therefore, it possibly make sense in order to reduce the computational complexity to obtain this thevinin equivalent circuit by simply omitting this part and connecting this right across the supply voltage.In fact, that is what is done in most practical cases; since, the results that are obtained by that approximation is not very different from this exact equivalent circuit; we will shortly see that. The rational is this impedance of the magnetizing branch being much higher than the impedance of the primary winding; that is winding resistance and leakage reactants, the inter applied primary voltage appears almost across the magnetization branch. The drop across the primary impedance is very small even at a rated current; with that assumption the exact equivalent circuit referred to the primary can be simplified by the following approximate equivalent circuit. 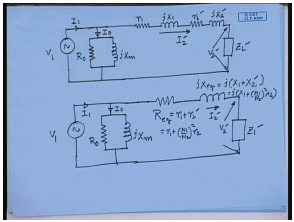 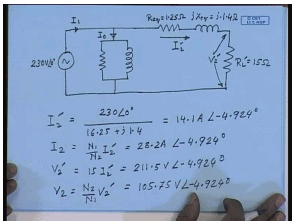 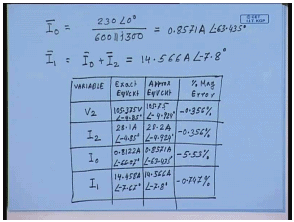 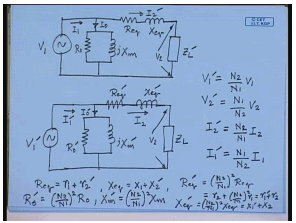