Error DetectionFor reliable communicati on errors must be detected and corrected. For error detection we are using many mechanisms.RedundancyOne error detection mechanism is sending every data unit twice. The receiving device then would be able to do a bit for bit comparison between the two versions of the data. Any discrepancy would indicate an er ror, and an appropriate correction mechanism could be used.But instead of repeating the entire data stream, a shorter group of bits may be appended to the end of each unit. This technique is called redundancy because extra bits are redundant to the information. They are discarded as soon as the accuracy of the transm ission has been determined. 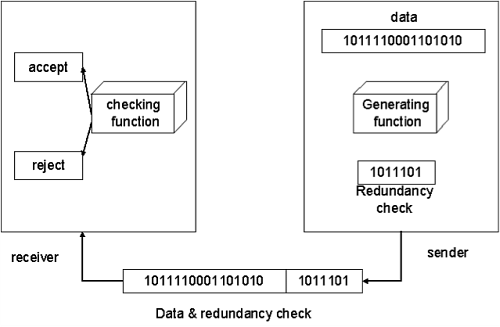 Cyclic Redundancy CheckCRC is based on binary division. In this a sequence of redundant bits, called CRC remainder is appended to the end of a data unit so that the resulting data unit becomes exactly divisible by a second predetermined binary number. At its destination, the incoming data unit is divided by the same number. If at this step there is no reminder, the data unit is assumed to be intact and therefore accepted. A remainder indicates that the data unit has been changed in transit and therefore must be rejected.

Here, the remainder is the CRC. It must have exactly one less bit than the divisor, and appending it to the end of the data string must make the resulting bit sequence exactly divisible by the divisor.

First, a string of n-1 0s is appended to the data unit. The number of 0s is one less than the number of bits in the divisor which is n bits. Then the newly elongated data unit is divided by the divisor using a process called binary division. The remainder is CRC. The CRC is replaces the appended 0s at the end of the data unit.

The data unit arrives at the receiver first, followed by the CRC. The receiver treats whole string as the data unit and divides it by the same divisor that was used to find the CRC remainder. If the remainder is 0 then the data unit is error free. Otherwise it having some error and it must be discarded.ChecksumThe error detection method used by the higher layer protocols is called checksum. It consists of two arts. They are,1.     checksum generator2.     checksum checker 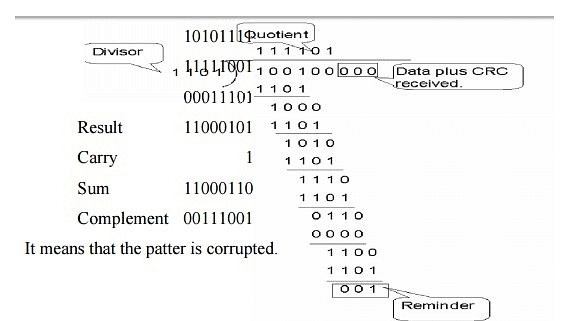 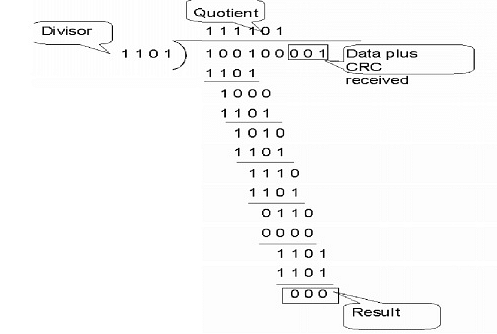 To calculate the number of redundancy bits (r) required to correct a given number of data bits (m) we must find a relationship between m and r.If the total number of bits in a transmittable unit is m+r then r must be able to indicate at least m+r+1 different state. Of these, one state means no error and m+r states indicate the location of an error in each of the m+r positions.So m+r+1 state must be discoverable by r bits. And r bits can indicate 2r different states. Therefore, 2rmust be equal to or greater than m+r+1;2r >=m+r+1 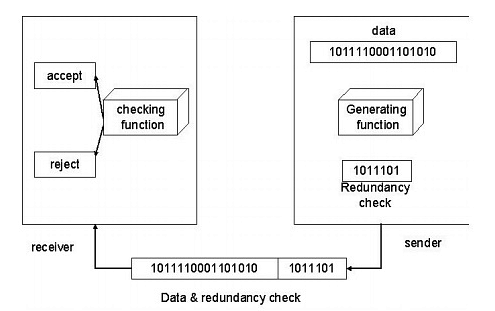 At the receiver:The receiver takes the transmission and recalculates four new r values using the same set of bits used by the sender plus the relevant parity (r) bit for each set. Then it assembles the new parity values into a binary number in order of r position (r8, r4, r2, r1). 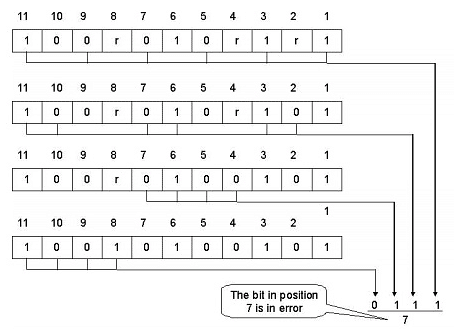 Once the bit is identified, the receiver can reverse its value and correct the error.Burst Bit Error Correction:A hamming code can be designed to correct burst errors of certain length. The number of redundancy bits required to make these corrections, however, is dramatically higher than that required for single bit errors. To correct double bit errors, for example, we must take into consideration that the two bits can be a combination of any two bits in the entire sequence. Three bit correction means any three bits in the entire sequence and so on.