Commemoration of Republic Day 2021The Republic day in the coming year will be celebrated on 26 January, Tuesday. India will be celebrating its 72nd republic day of India in 2021. Chandrikapersad Santokhi (president of Suriname) will be the chief guest of the republic day parade 2021. It was confirmed after the cancellation of the UK's Prime Minister Boris Johnson's trip due to the Covid crisis. The preparations of programmes are in progress along with necessary precautions against COVID-19.

The Reason behind Celebrating Republic Day on 26 JanuaryEvery festival that we celebrate or enjoy in our country has a reason or story behind its celebration. Do you know why 26th January is only observed as Republic day? It could be some other day too but there is a story behind celebrating our republic day on this date only. The event traces its roots from the demand of Poorna Swaraj by Jawaharlal Nehru in 1930 and the story begins from here.

The Need for Making India a Republic NationIn 1947 India got free from British rule but people were devoid of any kind of freedom. The social evils like untouchability, discrimination on the basis of caste, sex, and religion continued. People did not have the right to enjoy their rights and speak for anything. There was the utmost need for some laws or constitution to provide the basic rights to citizens without discrimination. The development of people and the nation could be possible only when the nation is democratic, sovereign, secular, and republic. This led to the advent of the constitution that we have now. It was 26 January only when the constitution was adopted by India.

Celebration of Republic Day in IndiaEvery year from 26 January 1950, we have been celebrating republic day in our country. The Government head of other countries is invited as a chief guest every year on this day. The celebration takes place in New Delhi on the Raj Path. The president of India hoists the National flag after the salute of 21 guns. He further salutes the national flag that is followed by singing the national anthem. Many programs and processions representing the rich amalgamation of varied cultures and traditions of India are presented on that day. 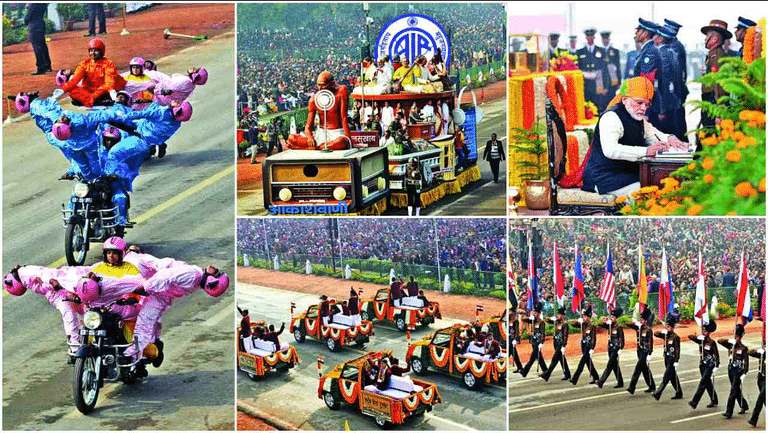 The defense ministry of India organizes a parade from Rashtrapati Bhavan to India gate in New Delhi. A tableau of the country’s military and weapon power is shown by the Indian armed forces to render tribute to the nation. There are bands from all the divisions of the armed forces and they take part in the programs and parades. The awards like Padma Vibhushan, Padma Shree, and Padma Bhusan, and Gallantry awards are distributed by the honorable President to the civilians. The martyrs are paid honor for their sacrifice for the nation. We enjoy the live telecast of the programs in New Delhi.

How do We Celebrate Republic Day in School?January is the colder month of the year and it is the first event we celebrate in school after the ending of our winter vacations and the beginning of school. It is a gazetted holiday on this day but a short program is organized in the school on this day. The National Flag is hoisted by the chief guest of the day. We are advised to wear a white uniform on that day and pin-up the national flag badge. The celebration begins after the national anthem is sung. The chief guest distributes certificates and medals to the meritorious students. Sweets are distributed among the students after the end of the program.

The Significance of Celebrating 26 January as Republic Day in IndiaIt was the day on which the constitution of India was adopted and came into effect. The country became a sovereign, secular, and republic nation on 26 January 1950. The people got fully independent on this day and the nation attained democracy. The constitution guarantees freedom and right to all citizens without any discrimination on any basis.

ConclusionThis day marks historic importance as the constitution of India has been declared on this day. People from different parts of India visit New Delhi to enjoy and become spectators of the event. The day is a proud moment for every Indian and people celebrate it with great enthusiasm and happiness.

The document Essay on Why Republic Day is celebrated on 26 January - Notes | Study Essays for Class 9 - Class 9 is a part of the Class 9 Course Essays for Class 9.
All you need of Class 9 at this link: Class 9
Attempt Now
Join Course