The steps in the construction are:

•  Determine the point of maximum curvature A.

•  Draw the extension ED of the straight line portion of the curve.

•  Where the line ED cuts the bisector AF of angle CAB, that point corresponds to the preconsolidation stress. On the assumption that the excess pore water drains only along vertical lines, an analytical procedure can be developed for computing the rate of consolidation. Consider a saturated soil element of sides dx, dy and dz. If n is the porosity, the volume of water in the element = n.dx.dy.dz The continuity equation for one-dimensional flow in the vertical direction is

Only the excess head (h) causes consolidation, and it is related to the excess pore water pressure (u) by h = u/gw.The Darcy equation can be written as

The Darcy eqn. can be substituted in the continuity eqn., and the porosity n can be expressed in terms of void ratio e, to obtain the flow equation as

The soil element can be represented schematically as If e0 is the initial void ratio of the consolidating layer, the initial volume of solids in the element is (dx dy dz ) / (1 + e0), which remains constant. The change in water volume can be represented by small changes De in the current void ratio e.

The flow eqn. can then be written as

This is the hydrodynamic equation of one-dimensional consolidation. If av = coefficient of compressibility, the change in void ratio can be expressed as De = av.(-Ds') = av.(Du) since any increase in effective stress equals the decrease in excess pore water pressure. Thus,

The flow eqn. can then be expressed as

By introducing a parameter called the coefficient of consolidation,

the flow eqn. then becomes

This is Terzaghi's one-dimensional consolidation equation. A solution of this for a set of boundary conditions will describe how the excess pore water pressure u dissipates with time t and location z. When all the u has dissipated completely throughout the depth of the compressible soil layer, consolidation is complete and the transient flow situation ceases to exist.

During the consolidation process, the following are assumed to be constant:

There are three variables in the consolidation equation:

1. the depth of the soil element in the layer (z) 2. the excess pore water pressure (u)3. the time elapsed since application of the loading (t)

, where H = drainage path which is the longest path taken by the pore water to reach a permeable sub-surface layer above or below.

2. Consolidation ratio at depth z, Uz , which is the ratio of dissipated pore pressure to the initial excess pore pressure. This represents the stage of consolidation at a certain location in the compressible layer. 3. Time factor, The figure is symmetrical about the horizontal line at

The above graphical solution shows how consolidation proceeds with time at different locations for a particular set of boundary conditions, but it does not describe how much consolidation occurs as a whole in the entire compressible layer.

The variation of total consolidation with time is most conveniently plotted in the form of the average degree of consolidation (U) for the entire stratum versus dimensionless time T, and this is illustrated below. 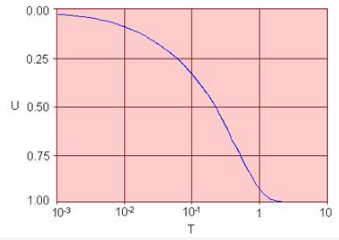 Consolidation Settlement and Time To estimate the amount of consolidation which would occur and the time it would take to occur, it is necessary to know:

Comparing the compressible soil layer with a soil element of this layer,

De can be expressed in terms of av or Cc.

The magnitude of consolidation settlement is

Example 1: A 3 m thick layer of saturated clay in the field under a surcharge loading will achieve 90% consolidation in 75 days in double drainage conditions. Find the coefficient of consolidation of the clay. 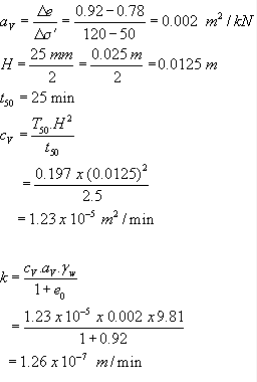