In support of organic evolution some important evidences are –

Fossils provide one of the most acceptable evidence in support of organic evolution.

(1) Sedimentary Rocks – These are formed at the bottom of ancient oceans by deposition of sediments of sand, lime, coal and minerals which slowly change into hard layers.

(2) Igneous rocks – Such rocks are formed by ancient volcanic deposits which slowly cooled down and hardened as rocks e.g.

They generally do not have fossils.

(3) Metamorphic rocks – These are formed by metamorphosis of sedimentary and igneous rocks. Such metamorphosis may be caused by pressure heat and physical movements. e.g. Marble and Slate rocks.

1. Unaltered Fossils : In this type whole bodies of extinct organisms are found frozen in ice at the polar regions eg. Wooly mammoths (25000 yrs before extinct fossils were found from siberian region)

3. Mould fossils – Here no any part of the original organism is present. Only an impression of the external structure of body is preserved in wet soil.

4. Cast fossils – Some times minerals fills in the mould, resulting in cast fossils.

5. Print Fossils – Foot print or prints of wings, skin, leaves, stems etc made in soft mud which subsequently become fossilized are a common type of fossils.

6. Coprolites – These fossils include the fossil preservation of contents of the intestine or excreta of many ancient animals including particularly the reptiles or fishes.

By studying fossils following facts about organic evolution are evident –

2. In the beginning unicellular protozoans were formed from which multicellular animals evolved.

4. Angiosperms among plants and mammals among animals are highly developed modern organism

5. By fossils, we can study the evolutionary pedigree of an animal like stages in evolution of horse, elephant and man etc.

Archaeopteryx – Fossil connective link between birds and reptiles. Fossil was discovered by Andreas wagner from Bavaria in Germany. It was found in the rocks of the Jurassic period.

(2) Bones were not pneumatic.

(4) Presence of free caudal vertebrae as found in Lizard.

(1) Presence of feathers on the body.

(2) The two jaws were modified into beak.

(3) The fore limbs were modified into wings.

(4) The hind limbs were built in the typical avian plan. 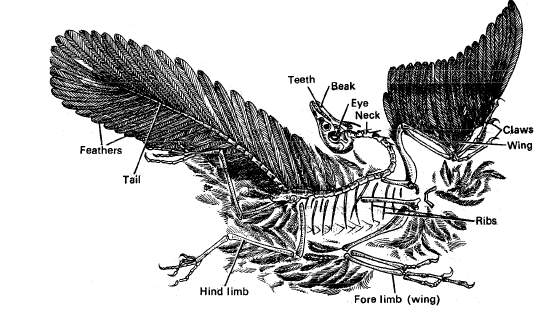 Evolution (PEDIGREE) of Horse – Evolution of horse was described by C.marsh.

The primitive fossil of the horse was found in North America named Eohippus.

Changes during evolution of horse are as follows –

2. Increment in the length of neck.

3. Development of high crown on the surface of teeth and formation of cement.

4. There is gradual increas in the length of legs.

5. Number of toes or fingers in legs have reduced in modern horse. Only middle toe touches the ground, other toes reduced gradually.

7. As new species were formed, previous ones become extinct.

Fossils of important Ancestores of horse

1. Eohippus or Hyracotherium – It evolved inEoceneEpoch. It's size was like a fox. (Orohippus : It evolved in middle Eocene epoch.)

2. Mesohippus– It evolved from eohippus during oligocene epoch. It's size was like a sheep. (Miohippus : In the late oigocene Mesohippus was replaced by another slightly advanced horse like form named miohippus. It was much like mesohippus in appearance but somewhat large in size). (Parahippus : It evolved in early miocene).

3. Merychippus – It evolved in middle and upper miocene epoch.

4. Pliohippus – This horse evolved during pliocene epoch. It was of the size of modern pony.

5. Equus (Modern horse) – This is modern horse which evolved from pliohippus during pleistocene epoch(height 60-64 inches). 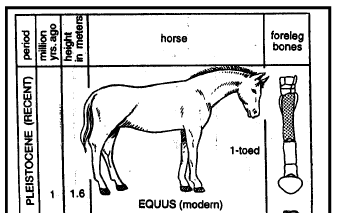 "Dating of fossils" or "The clock of the Rock"The fossils give valuable information about the history of organic evolution by giving information about the organisms which existed in the past. This is possible only if the correct age of the fossils can be determined.Methods have been developed to find out the correct age of the fossils by determining the age of the rocks where the fossils are found. Rocks have been found to contain certain radioactive elements which lose their radioactivity and change into other nonradioactive isotopes at a fixed rate irrespective of the environmental conditions prevailing at different times. If the rate of this loss of radioactivity of an element is known, the relative proportions of the quantities of radioactive and nonradioactive element in a given rock will enable us to find out the age of the rock. This method is calledabsolute dating.This will be illustrated with the help of four different methods.

Chronological order of the history of organic evolution, which is presented in the form of geological time scale.This time scale includes the history of earth itself ever since it was formed due to formation of its crust from lava of ancient volcanic eruptions.The period between the origin of gaseous cloud (4.6 billion years ago) from which the earth was formed and the formation of earth's crust is calledAzoic Era(era of no life). The remaining period (About 4.0 billion years) is divided in to Five Eras namely

The Archaeozoic Era had "invisible life" and the remaining four era had "visible life"(Phanerozoic).Archaeozoic and proterozoic eras are also grouped together as precambrian because the first part of palaeozoic is cambrian.The three eras namely palaeozoic, mesozoic and coenozoic, each is further divided into smaller time spans called Period and the periods of coenozoic era are each further subdivided into Epochs. It is also believed that each era of earth's history started with a revolution or cataclysm and ended with yet another revoluation.