The document Ex 7.1 NCERT Solutions- Triangles Class 9 Notes | EduRev is a part of the Class 9 Course Mathematics (Maths) Class 9.
All you need of Class 9 at this link: Class 9

Question 1. In quadrilateral ACBD, AC = AD and AB bisects ∠A (see figure). Show that ΔABC ≌ ΔABD. What can you say about BC and BD? Solution: In quadrilateral ABCD we have AC = ADand AB being the bisector of ∠A.Now, in ΔABC and ΔABD, 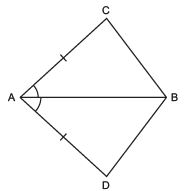 Question 3. AD and BC are equal perpendiculars to a line segment AB (see figure). Show that CD bisects AB. Solution: We have ∠ABC = 90° and ∠BAD = 90°Also AB and CD intersect at O.∴ Vertically opposite angles are equal.Now, in ΔOBC and ΔOAD, we have

Question 5. Line l is the bisector of an angle A and B is any point on l. BP and BQ are perpendiculars from B to the arms of ∠A (see Figure). Show that: (i) ΔAPB ≌ ΔAQB (ii) BP = BQ or B is equidistant from the arms of ∠ A. 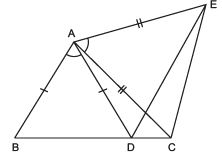 Question 8. In right triangle ABC, right angled at C, M is the mid-point of hypotenuse AB. C is joined to M and produced to a point D such that DM = CM. Point D is joined to point B (see figure). Show that 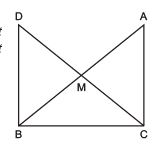