➢ Liquid in glass thermometers using mercury were, by far, the most common direct visual reading thermometer (if not the only one). Mercury also has the advantage of not wetting the glass; that is, the mercury cleanly traverses the glass tube without breaking into globules or coating the tube. The operating range of the mercury thermometer is from −30° to +800°F (−35° to +450°C). The freezing point of mercury −38°F (−38°C). The toxicity of mercury, ease of breakage, the introduction of cost-effective, accurate, and easily read digital thermometers, has brought about the demise of the mercury thermometer for room and clinical measurements. Other liquid in glass devices operate on the same principle as the mercury thermometer. These other liquids have similar properties to mercury (e.g., have a high linear coefficient of expansion, are clearly visible, are nonwetting), but are nontoxic. The liquid in glass thermometers are used to replace the mercury thermometer, and to extend its operating range. These thermometers are inexpensive, and have good accuracy (<0.1°C) and linearity. These devices are fragile, and used for local measurement. The operating range with different liquids is from −300° to +1,000°F (−170° to +530°C). Each type of liquid has a limited operating range.➢ A bimetallic strip is a relatively inaccurate, rugged temperature-measuring device, which is slow to respond and has hysteresis. The device is low cost, and therefore is used extensively in On/Off-types of applications, or for local analog applications not requiring high accuracy, but it is not normally used to give remote analog indication. These devices operate on the principle that metals are pliable, and different metals have different coefficients of expansion. If two strips of dissimilar metals, such as brass and invar (copper-nickel alloy), are joined together along their length, then they will flex to form an arc as the temperature changes. This is shown in Figure 10.1(a). Bimetallic strips are usually configured as a spiral or helix for compactness, and can then be used with a pointer to make an inexpensive, compact, rugged thermometer, as shown in Figure 10.1(b).

Figure 10.1 (a) Effect of temperature change on a bimetallic strip, and (b) bimetallic thermometer using a helical bimetallic coil.

When using a straight bimetallic strip, an important calculation to determine the movement of the free end of the strip is given by:

where d is the deflection, αA is the coefficient of linear expansion of metal A, αB is the coefficient of linear expansion of metal B, T1 is the lower temperature, T2 is the elevated temperature, ℓ is the length of the element, and t is the thickness of the element.The equation shows the linear relationship between deflection and temperature change. The operating range of bimetallic elements is from −180° to +430°C, and they can be used in applications from oven thermometers to home and industrial control thermostats.➢ Pressure-spring thermometers are used where remote indication is required, as opposed to glass and bimetallic devices, which give readings at the point of detection. The pressure-spring device has a metal bulb made with a low coefficient of expansion material along with a long metal narrow bore tube. Both contain material with a high coefficient of expansion. The bulb is at the monitoring point. The metal tube is terminated with a Bourdon spring pressure gauge (scale in degrees), as shown in Figure 10.2. The pressure system can be used to drive a chart recorder, actuator, or a potentiometer wiper to obtain an electrical signal. As the temperature in the bulb increases, the pressure in the system rises. Bourdon tubes, bellows, or diaphragms sense the change in pressure. These devices can be accurate to 0.5%, and can be used for remote indication up to a distance of 100m, but must be calibrated, since the stem and Bourdon tube are temperature-sensitive.There are three types or classes of pressure-spring devices. These are:

➢ The liquid-filled thermometer works on the same principle as the liquid in glass thermometer, but is used to drive a Bourdon tube. The device has good linearity and accuracy, and can be used up to 550°C.➢ The vapor-pressure thermometer system is shown in Figure 10.2. The bulb is partially filled with liquid and vapor, such as methyl chloride, ethyl alcohol, ether, or toluene. In this system, the lowest operating temperature must be above the boiling point of the liquid, and the maximum temperature is limited by the critical temperature of the liquid. The response time of the system is slow, being of the order of 20 seconds. The temperature-pressure characteristic of the vapor-pressure thermometer is nonlinear, as shown in the vapor pressure curve for methyl chloride in Figure 10.3.➢ A gas thermometer is filled with a gas, such as nitrogen, at a pressure of between 1,000 and 3,350 kPa, at room temperature. The device obeys the basic gas laws for 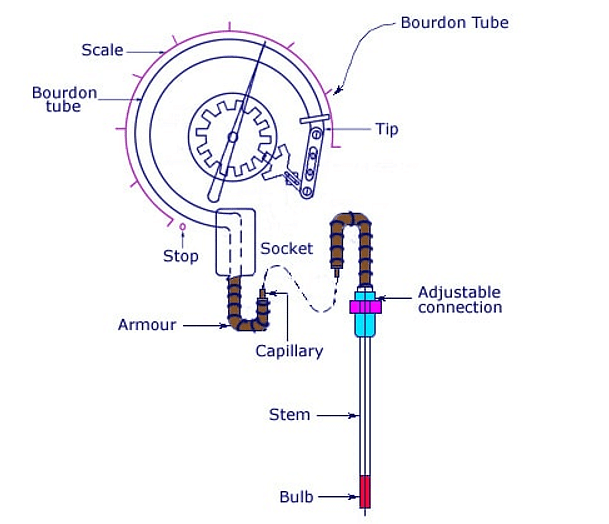