Q1. How many plant and animal species are approximately found in India?

Q2. What does 'Natural Vegetation' mean?

Natural vegetation refers to a plant community which has grown naturally without human aid and has been left undisturbed by humans for a long time. 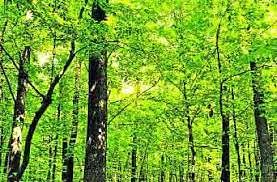 Q3. What is 'Virgin Vegetation'?

The natural vegetation which has been left undisturbed by the humans for a long time is called Virgin Vegetation.

Q5. What kind of land is suitable for natural vegetation?

The undulating and rough terrains are areas where grasslands and woodlands develop and give shelter to a variety of wildlife.

Q6. What kinds of soils are needed for natural vegetation?

The sandy soils of deserts support cactus and thorny bushes while wet, marshy deltic regions support mangroves and deltic vegetation and hill slopes with some depth soil have conical trees.

Q8. Which factors are responsible for changes in India's natural vegetation?

Factors responsible for changes in India's natural vegetation are: growing demand for cultivated land, development of industries and mining, urbanization and for grazing of pasture.

Q9. How is an ecosystem formed?

All the plants and animals in an area are interdependent and interrelated to each other in their physical environment thus form an ecosystem.

A very large ecosystem on land having distinct types of vegetation and animal life is called a biome. The biomes are identified on the basis of plants.

Q11. What are the major types of vegetation found in India?

Q12. Which animals are found in Tropical Rain Forests?

Common animals found in these forests are elephants, monkeys, lemus and deer and One-horned rhinoceros.

Ebony, mahogany, rosewood, rubber and cinchona are some of the commercially important trees of tropical rain forests.

Q14. Give one important characteristic of Tropical deciduous forests.

Trees of these forest type shed their leaves for about six to eight weeks in dry summers.

Q15. In which regions are moist deciduous forests found?

They are found in north eastern states, along the foothills of the Himalayas, Jharkhand, West Orissa, Chhattisgarh and on the eastern slopes of Western Ghats.

Q16. What are the important species of moist deciduous forests?

Q17. In which regions are dry deciduous forests found?

They are found in the rainy parts of the peninsular plateau and plains of Bihar and Uttar Pradesh.

Q21. In which regions are Mangrove forests found?

They are found in the deltas of the Ganga, the Mahanadi, the Krishna, the Godavari and the Kaveri.

Q22. What is the chief characteristic of Mangrove trees?

The chief characteristic is that Mangrove trees can survive both in saltwater as well as fresh river water.

Q23. In which regions is majestic elephant found?

They are found in the hot wet forests of Assam, Karnataka, and Kerala.

Q24. In which regions are horned rhinoceros are found?

One-horned Rhinoceros live in swampy and marshy lands of Assam and West Bengal.

Q25. What are the natural habitats of lions and tigers in India?

Gir Forests are the habitat of Indian lions and tigers live in Madhya Pradesh, Sunderbans of West Bengal and the Himalayan Regions.

Some of the important birds of India are peacocks, pheasants, ducks, parakeets, cranes and pigeons.

Q27. Name some of the important biosphere reserves of India.

Sundarbans in the West: Bengal, Nanda Devi in Uttranchal the GuIf of Mannar, in Tamil Nadu and Nilgiris at the injunction of Kerala, Karnataka and Tamil Nadu.

Q28. How many National Parks and Wild Life Sanctuaries are there in India?

There are 89 National Parks and 49 wildlife sanctuaries in India.

Q29. Which wildlife projects are set up to save endangered species?

Project Tiger, Project Rhino and Project Great Indian Bustard are set up to save these endangered species.

Q30. Why are forests important for human beings?

Q31. What is an ecosystem? How do human beings influence the ecology of a region?

All plants and animals in an area are interdependent and interrelated to each other and their dependence on the environment is called an ecosystem. Human beings influence the ecology of a region in the following ways:

Q32. Give a brief description of the Tropical Rainforests.

Q33. What are the main characteristics of the Thorn Forests and Scrubs?

Q34. Give a brief description of the Mangrove Forests.

Q35. Give a description of any five medicinal plants.

Q36. Why does India have a rich heritage of flora and fauna?

Q37. What steps have been taken by the government to protect the flora and fauna of the country?

Steps taken by the government to protect the flora and fauna are as follows:

Q38. Why does India have a rich heritage of flora and fauna?

Q39. What is the importance of various species in the ecosystem?