1) What kind of people in India are considered poor?

Answer: They could be landless labourers in villages or people living in overcrowded jhuggis in cities. They could be daily wage earners at construction sites or child workers in dhabas. They could also be beggars with children in tatters.

2) Has India the largest single concentration of the poor in the world?

Answer: In India every fourth person is poor. This means roughly 260 million (26 crores) people in India live in poverty. This illustrates the seriousness of the challenge.

3) What are the dimensions of poverty?

Answer: Poverty means hunger and lack of shelter. Poverty means a lack of clean water and sanitation facilities. It is a situation where sick people cannot afford treatment. It is a situation in which parents are not able to send their children to schools. It also means a lack of a regular job at a minimum decent level. Above all, it means living with a sense of helplessness. 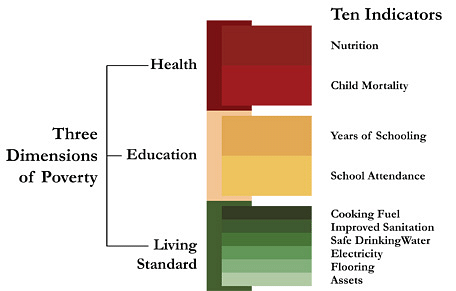 4) What is one of the biggest challenges of independent India?

Answer: One of the biggest challenges of independent India has been to bring millions of its people out of abject poverty. Mahatma Gandhi always insisted that India would be truly independent only when the poorest of its people become free of human suffering.

5) What are the social indicators of poverty as seen by social scientists?

Answer: Prevalent factors like illiteracy levels, lack of general resistance due to malnutrition, lack of access to health care, lack of job opportunities, lack of access to safe drinking water, sanitation, etc., are the social indicators of poverty as seen by social scientists.

6) What is the concept of social reclusion?

Answer:  According to this concept, poverty must be seen in terms of the poor having to live only in a poor surrounding with other poor people, excluded from enjoying the company of better-off people in better surroundings.

7) How is social exclusion practised in India?

Answer:  A typical example is the prevailing caste system in India, whereby which people belonging to certain castes are excluded from equal opportunities.

8) What is the vulnerability of poverty?

Answer: Vulnerability of poverty is a measure, which describes the greater probability of certain communities or individuals becoming or remaining poor in the coming years.

9) How vulnerability to poverty is determined?

Answer: Vulnerability is determined by the options available to different communities for finding an alternative living in terms of assets, education, health and job opportunities.

Answer: It is an indicator of poverty, i.e. it is a level of income that barely meets sustenance.

11) When is a person considered poor?

Answer: A person is considered poor if his or her income or consumption level falls below a given 'minimum level' necessary to fulfil basic needs.

12) How does a country measure its poverty?

Answer: Each country uses an imaginary line that is considered appropriate for its existing level of development and its accepted minimum social norms. For example, a person not having a car in the United States may be considered poor. In India, owning of a car is still considered a luxury.

13) How is the poverty line determined in India?

Answer: A minimum level of food requirement, clothing, footwear, fuel and light, educational and medical requirement etc. are determined for subsistence. These physical quantities are multiplied by their prices in rupees.

14) How is the food requirement estimated in the poverty line?

Answer: The present formula for food requirement while estimating the poverty line is based on the desired calorie requirement; food items such as cereals, pulses, vegetables, milk, oil, sugar, etc. together provide these needed calories.

15) What is the accepted average calorie requirement in India?

16) Why is the calorie requirement of rural areas more than that in urban areas?

Answer: Since people living in rural areas engage themselves in more physical work, calorie requirements in rural areas are considered to be higher than in urban areas.

17) How much amount is needed to fulfil the minimum calorie requirement in rural and urban areas?

Answer: On the basis of these calculations, for the year 2000, the poverty line for a person was fixed at `328 per month for the rural areas and ` 54 for the urban areas.

18) How is the poverty line estimated periodically?

Answer: The poverty line is estimated periodically (normally every 5 year) by conducting sample surveys. These surveys are carried out by the National Sample Survey Office (NSSO).

19) Which social groups are most vulnerable to poverty?

Answer: The social groups most vulnerable to poverty are scheduled castes and scheduled tribes.

20) Among the economic groups which are most vulnerable to poverty?

Answer: Among the economic groups the most vulnerable to poverty are the rural agricultural households and the urban casual labour households.

21) How are women, children and old people the poorest of the poor?

Answer: Women, elderly people and female infants are systematically denied equal access to resources available to the family. Therefore, they are the poorest of the poor.

22) Which states of India are the poorest?

Answer: Odisha and Bihar continue to be the two poorest states with poverty ratios of 47 and 43 per cent respectively.

23) Which states of India have seen a significant decline in poverty?

Answer: There has been a significant decline in poverty in Kerala, Jammu and Kashmir, Andhra Pradesh, Tamil Nadu, Gujarat and West Bengal.

24) How have Kerala and West Bengal reduced their poverty?

25) How has poverty reduced in Andhra Pradesh and Tamil Nadu?

Answer: In Andhra Pradesh and Tamil Nadu public distribution of food grains could have been responsible for the improvement in poverty.

26) How are China and South-Eastern Asian Countries able to control poverty?

27) What is the historical cause of poverty in India?

Answer: It is the low level of economic development under the British Colonial administration. The policies of the colonial government ruined traditional handicrafts and discouraged the development of industries like textiles. This resulted in less job opportunities and a low growth rate of incomes. This was accompanied by a high growth rate of the population.

28) How did unemployment lead to poverty?

29) What are the causes of huge income inequalities in rural areas?

Answer: One of the major reasons for this is the unequal distribution of land and other resources. Major policy initiatives like land reforms, which aimed at the redistribution of assets in rural areas, have not been implemented properly, leading to poverty in India.

30) What are the socio-cultural and economic factors responsible for poverty?

Answer: In order to fulfil social obligations and observe religious ceremonies, people spend a lot of money. Since poor people hardly have any saving, they borrow. Unable to repay because of poverty they become victims of indebtedness, an important cause of poverty.

31) Which are the two planks on which the anti-poverty strategy of the government is based?

32) How is economic growth linked with poverty reduction in India?

Answer: Economic growth widens opportunities and provides the resources needed to invest in human development. This also encourages people to send their children, including the girl child, to schools in the hope of getting better economic returns from investing in education.

33) What is the full form of MGNREGA?

34) What are the conditions of MGNREGA?

35) What was the National Food for Work Programme?

Answer:  It was launched in 2004 in the 150 most backward districts of the country. It is a centrally sponsored scheme, in which food grains are provided free of cost to the states. The programme is open to all poor who are in need of wage employment and desire to do manual unskilled work.

Answer:  It stands for Prime Minister Rozgar Yojana, started in 1993. The aim of the programme is to create self-employment opportunities for educated unemployed youth in rural areas and small towns.

37) What is Rural Employment Generation Programme?

Answer: Launched in 1995, the aim of the programme is to create self-employment opportunities in rural areas and small towns.

38) What were the targets of SGSY?

Answer: The Swarnajayanti Gram Swarozgar Yojana was launched in 1999. It aims at bringing up the assisted poor families above the poverty line by organizing them into self-help groups through a mix of bank credit and government subsidy.

Answer:   It was Pradhan Mantri Gramodaya Yojna launched in 2000. Accordingly, additional central assistance is given to the states for basic services such as primary health, primary education, rural shelter, rural drinking water and rural electrification.

40) What is India's most compelling challenge?

Answer:  India's most compelling challenge remains poverty reduction. Wide disparities in poverty are visible between rural and urban areas and among different states.

41) What are the bigger challenges before India?

Answer: Providing health care, education and job security for all and achieving gender equality and dignity for the poor are the bigger challenges before India.

42) What are the dimensions of poverty?

43)  How is poverty viewed by social scientists?

Answer: Since poverty has many facts, social scientists look at it through a variety of indicators. These social indicators are:

44) What does 'social exclusion' mean?

45) How is vulnerability to poverty measured?

46) What is the trend of poverty estimates since 1973? Or Describe poverty trends in India since 1973.

47) How do income inequalities exist within a family?

48)   Which states are most vulnerable to poverty in India?

49)   Which states report a significant decline in poverty?

50) What are the major reasons for the less effectiveness of poverty alleviation programmes?

51) What challenges are ahead of India with respect to poverty alleviation?

52) How is poverty reduction expected to be better?

53) What are the main features of the Mahatma Gandhi National Rural Employment Guarantee Act 2005? 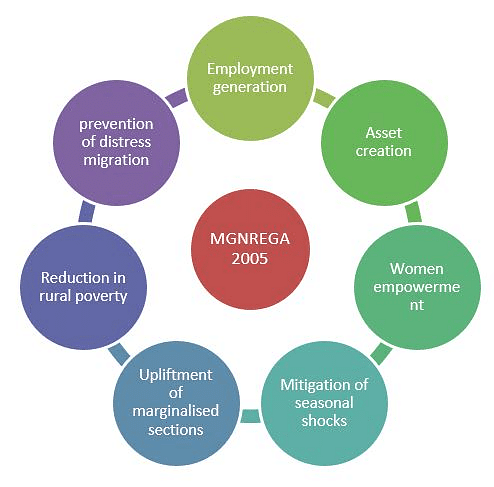