Factors affecting geometric design of A HighwayRoad geometrics are greatly influenced by:1)Topography of the area :topography of area mainly affects the geometric design of highway .the design standards are different areas. in hilly area it is necessary to allow for steeper grain dent and sharper horizontal curves.2)Design speed : The design speed is a tool used to determine geometric features of a new road during road design. Contrary to the word's implication, a road's design speed is not necessarily its maximum safe speed; that can be higher or lower. The design speed chosen for a highway is a major factor in choosing superelevation rates and radii of curves, sight distance, and the lengths of crest and sag vertical curves. Roads with higher travel speeds require sweeping curves, steeper curve banking, longer sight distances, and more gentle hill crests and valleys. Lower speed roads can have sharper curves, less banking, less sight distance, and sharper hill crests and valleys.Different speed standards are assigned for different class of road and also design speed standards depends on terrain and topography. Design is almost every geometric design element of a road is depends on the design speed.3)Traffic factors: vehicular characteristic i.e cars, buses, trucks, motor cycles have different speed and characteristics and human characteristics of road users,i.e physical, mental and psychological characteristic of drivers and pedestrians also affect geometric standards of any road.4)Environmental and other factors: landscaping ,noise ,air pollution and other local conditions also affect road geometrics5) Economy: The design adopted should be economical as far as possible. It should match with the funds allotted for capital cost and maintenance cost.Land Width: It is total width of the land acquired by the Govt. along the road for the construction and maintenance of the roads. No other buildings by public can be constructed on the land width. Land width depends upon the following factors:(a) It depends on the type of the road to be constructed, like NH require more width as compare to the lower level highways.(b) It depends on the anticipated future increase in the traffic on the route or the economic or industrial development of the areas which it aligns along its route.Cross sectional elements: The features of the cross-section of the pavement influences the Life of the pavement as well as the riding comfort And safety. Of these, pavement surface characteristics affect both of these. Camber, kerbs, and geometry of various cross-sectional elements are important aspects to be considered in this regard.Pavement surface characteristicsFor safe and comfortable driving four aspects of the pavement surface are important; the friction between the wheels and the pavement surface, smoothness of the road surface, the light re ection characteristics of the top of pavement surface, and drainage to water.Friction Friction between the wheel and the pavement surface is a crucial factor in the design of horizontal curves and thus the safe operating speed. Further, it also affect the acceleration and deceleration ability of vehicles. Lack of adequate friction can cause skidding or slipping of vehicles.Skidding happens when the path traveled along the road surface is more than the circumferential movement of the wheels due to friction Slip occurs when the wheel revolves more than the corresponding longitudinal movement along the road.Various factors that affect friction are:Type of the pavement (like bituminous, concrete, or gravel),Condition of the pavement (dry or wet, hot or cold, etc),Condition of the tyre (new or old), andSpeed and load of the vehicle.The frictional force that develops between the wheel and the pavement is the load acting multiplied by a factor called the coefficient of friction and denoted as f . The choice of the value of f is a very complicated issue since it depends on many variables. IRC suggests the coefficient of longitudinal friction as 0.35-0.4 depending on the speed and coefficient of lateral friction as 0.15. The former is useful in sight distance calculation and the latter in horizontal curve design.UnevennessIt is always desirable to have an even surface, but it is seldom possible to have such a one. Even if a road is constructed with high quality pavers, it is possible to develop unevenness due to pavement failures. Unevenness affect the vehicle operating cost, speed, riding comfort, safety, fuel consumption and wear and tear of tyres.Unevenness index is a measure of unevenness which is the cumulative measure of vertical undulations of the pavement surface recorded per unit horizontal length of the road. An unevenness index value less than 1500 mm/km is considered as good, a value less than 2500 mm.km is satisfactory up to speed of 100 kmph and values greater than 3200 mm/km is considered as uncomfortable even for 55 kmph.Light reaction White roads have good visibility at night, but caused glare during day time. Black roads has no glare during day, but has poor visibility at night. Concrete roads has better visibility and less glare. It is necessary that the road surface should be visible at night and refection of light is the factor that answers it.Drainage The pavement surface should be absolutely impermeable to prevent seepage of water into the pavement layers. Further, both the geometry and texture of pavement surface should help in draining out the water from the surface in less time.Camber: Camber is the transverse slope provided to the road surface for the drainage of the rainwater for the better performance of the road. Camber can be written as 1 in n or x%.Drainage of the rainwater is necessary(1) To maintain the safe value of the friction between the road surface and the tyres(2) To maintain the strength and durability of the surface concrete(3) To maintain the durability and strength of the sub-grade soil this can be harmed if the infiltration of the water takes place to it.There are generally three types of the cambers: (a) Straight Camber (b) Parabolic Camber (c) Mixed Camber. 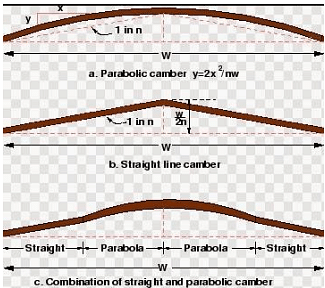 (a) Straight Camber: This type of camber is provided by meeting two straight surfaces at the crown. Crown is the central and top most point on the surface of the road. The edge shape produces in-convenience to the traffic so it is not used in general.(b) Parabolic Camber: Parabolic camber is provided by providing a parabolic shape to the surface of the road. It is also not used in general because it has steep slopes towards the edges, which can create the outward thrust to the vehicles.(c) Mixed Camber: Mixed camber is formed by use of the straight surfaces at the edges but parabolic surface at the centre. It is mostly used for the road construction because both the problem of the earlier two are solved if we use this camber.Gradient: It is the slope provided to the surface of the road in the longitudinal direction for the vertical alignment of the road. There are three kinds of gradients:

A vehicle on ascending gradient(a) Ruling Gradient (b) Limiting Gradient (c) Exceptional Gradient (d) Minimum Gradient. Ruling gradient is the design gradient, so it is used to design the road in the vertical alignment. Limiting and exceptional gradients are provided in the limited stretch of the roads where necessary and in case of the emergencies or exceptional cases when such need arises respectively. Minimum gradient is the gradient which is required as the minimum from the drainage point of view in case of the plane areas.Sight Distance: Sight distance at any instance is the distance along the center line of the road which is visible to the eye of a driver at an height of 1.2 m from the road surface such that an obstruction of height 0.15 m is visible to him. The heights of the eye of the driver and the obstruction is standardized by the Indian Roads Congress. 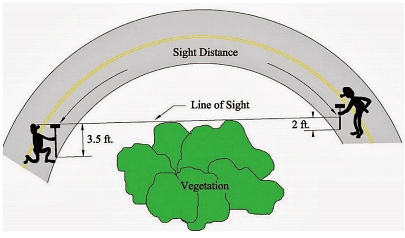