The document Facts that Matter- Circles Class 9 Notes | EduRev is a part of the Class 9 Course Mathematics (Maths) Class 9.
All you need of Class 9 at this link: Class 9 is a secant and

is a tangent to the circle at C.

Note:
I. Diameter is the longest chord in a circle.II. Diameter = 2 x Radius

The length of the complete circle is called its circumference, whereas a piece of a circle between two points is called an arc.

Note:
I. A diameter of a circle divides it into two equal arcs, each of which is called a semicircle.II. If the length of an arc is less than the semicircle, then it is a minor arc, otherwise, it is a major arc. 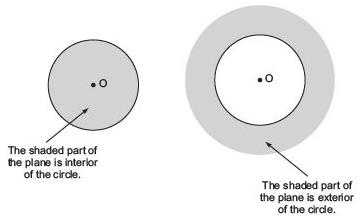 Note:
The region consisting of all points which are either on the circle or lie inside the circle is called the circular region.