The female reproductive system consists of the pair of ovaries, uterine tubes, uterus, vagina, and external genitalia. The breasts, or mammary glands, are structurally and functionally integrated to support the processes of ovulation, fertilisation, pregnancy, birth, & child care. 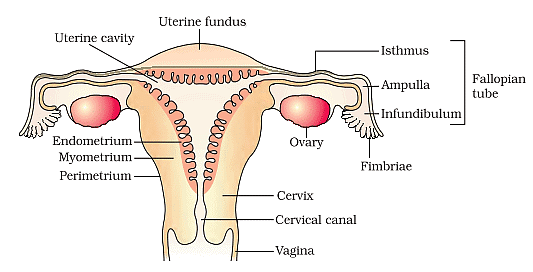 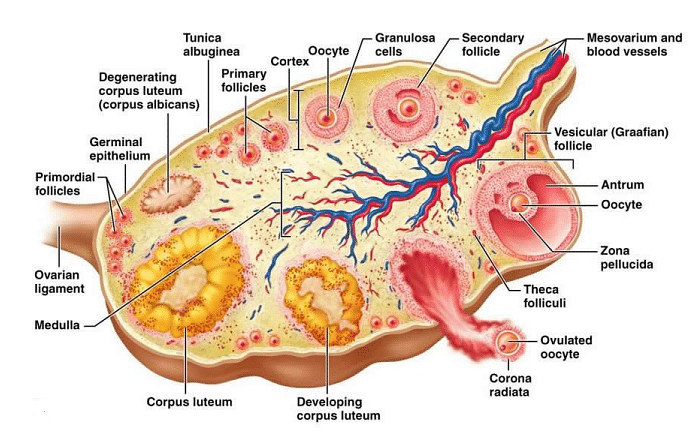 The ovary is made up of the following parts:

(ii) Beneath the epithelium is the tunica albuginea- a layer of connective tissue and underlying it is the ovarian stroma.

(iv) No more oogonia are formed and added after birth.

(vi) After ovulation many of the follicular cells remain in the collapsed follicle on the surface of the ovary. 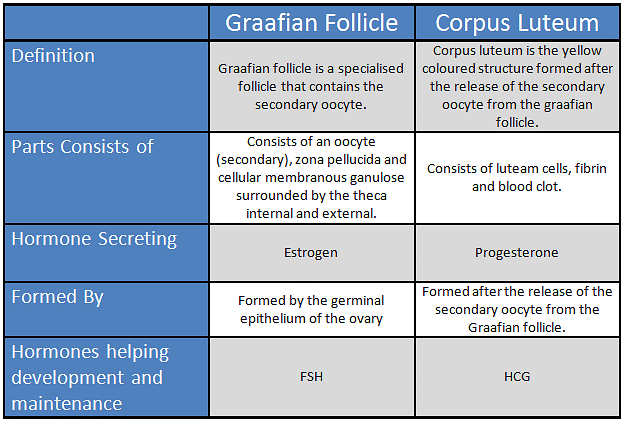 (vii) Degenerated part of the corpus luteum is called corpus albicans, literally meaning white body. In fact, it is a white scar-like area. 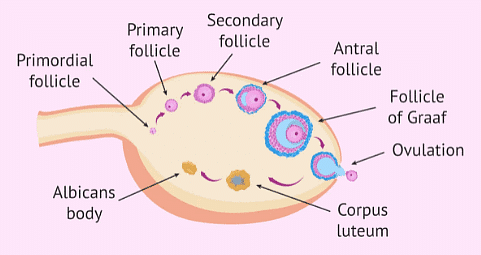 Functions of Ovaries: Production of ova and secretion of female sex hormones.

(i) The infundibulum is a dilated trumpet-like portion opening into the peritoneal cavity. The end of the tube has finger-like projections called fimbriae which help in the collection of the ovum after ovulation.

(ii) The ampulla is the widest and longest part of the Fallopian tube.

(iii) The isthmus is the short, narrow thick-walled portion that follows the ampulla.

(v) Uterus is single and known as Womb. 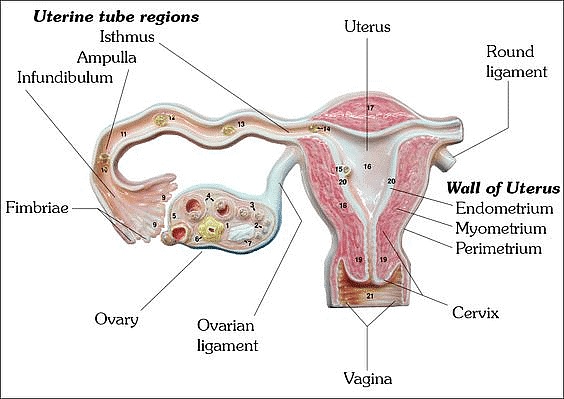 Try yourself:The uterus is single and it is also called:
Explanation

The uterus, commonly known as the womb, is a muscular organ of the female reproductive system that is inverted pear-shaped and positioned between the bladder and the rectum.

3. Uterus (Metra or Hystera or Womb) 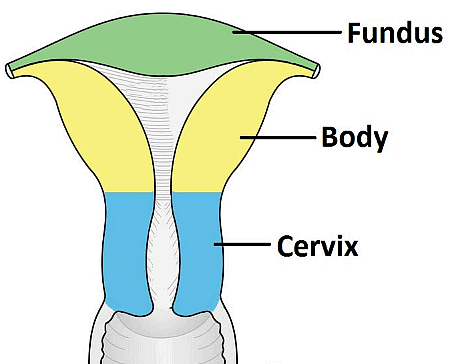 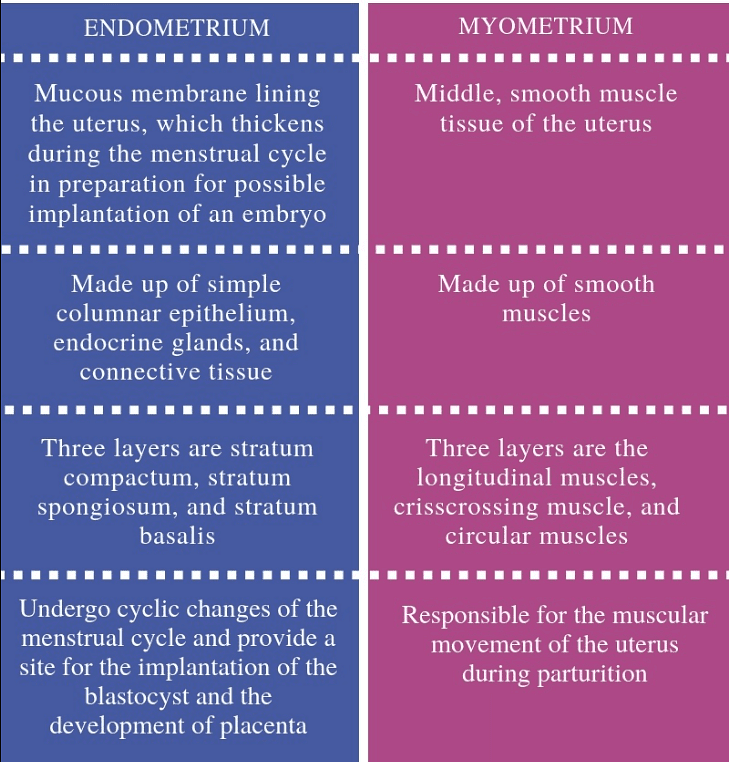 Differences between Endometrium and Myometrium

Functions of Uterus: After puberty, the uterus goes through the menstrual cycle. If the fertilization has taken place, the embryo gets attached to the uterine wall where it is nourished and protected. At the end of the gestation period, labour begins and concludes when the child is born known as Parturition.

Parturition is the act of removing the full-term child from the mother's uterus at the end of the pregnancy. Gestation (pregnancy) lasts around 266 days after the mother's last menstrual period.

Functions of Vagina: It provides a passageway for the menstrual flow, serves as the receptacle for sperm during intercourse, and forms part of the birth canal during labour.

The hymen is often torn during the first coitus (intercourse). However, it can also be broken by a sudden fall or jolt, active participation in some sports like horseback riding, bicycling, etc. In some women, the hymen remains even after coitus. In fact, the presence or absence of a hymen is NOT a reliable indicator of virginity.

(i) Mons veneris (mons pubis): It is a cushion of fatty tissue or of subcutaneous connective tissue, lying in front of the pubis & is covered by pubic hairs in the adult female.

(ii) Labia majora: Vulva is bounded on each side by the elevation and fleshy folds of skin & subcutaneous tissue. Its inner surface is hairless. The outer surface is covered by the sebaceous gland, Sweat gland & hair follicles. It is homologous with the scrotum in the male.

(iii) Labia minora: They are two thin folds of skin present just within the labia majora. The lower portion of the minora fuses across the midline & form a fold of skin called a fourchette.

(iv) Clitoris: It is a tiny finger-like structure that lies at the upper junction of the two labia minora above the urethral opening. It is made up of two erectile bodies (corpora cavernosa). The skin which covers the glans of the clitoris is called a prepuce.  At the terminal part of the vagina, the urethra opens separately, so they form a common chamber called the vaginal vestibule or urogenital sinus.The vulva has the following openings:

(a) Urethral opening: Lies on the anterior end

(b) Vaginal orifice: Lies on the posterior end.

It is incompletely closed by a septum of mucous membrane called the hymen, but it may not be a true sign of virginity.

(c) Opening of Bartholin's ducts: These are opening of one pair of bartholin's/greater vestibular glands situated on the lateral side of the vagina. They secrete alkaline fluid during sexual excitement. 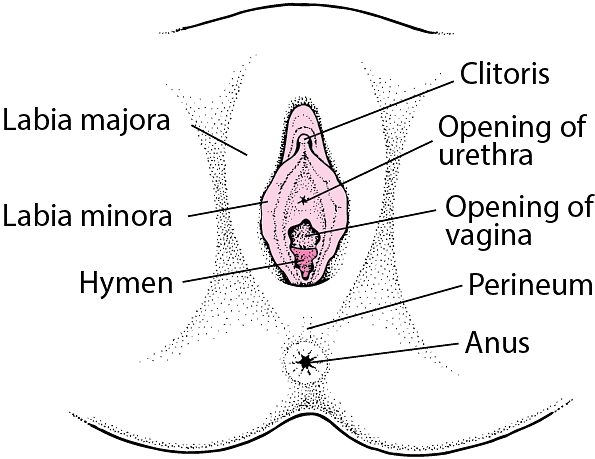 (v) Perineum: It is the area that extends from the fourchette to the anus.

Thus, the gland secretes mucus to lubricate the vagina. 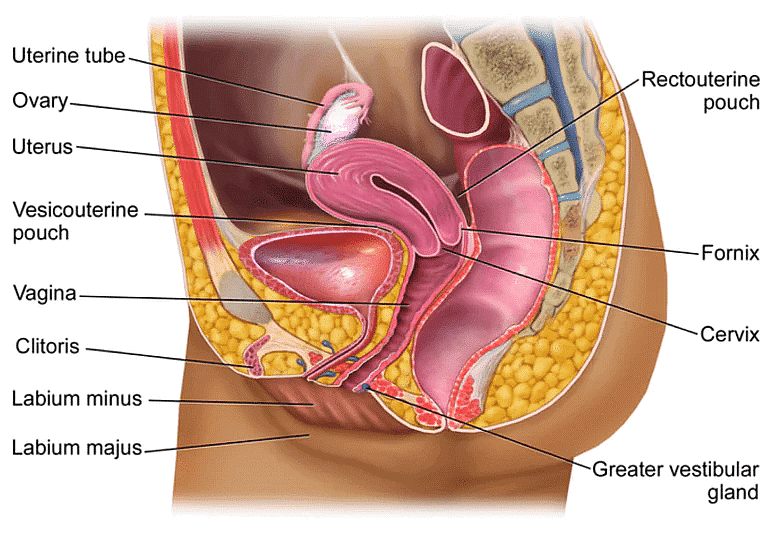 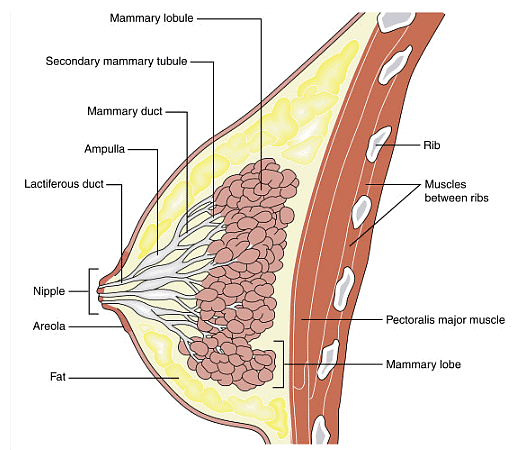 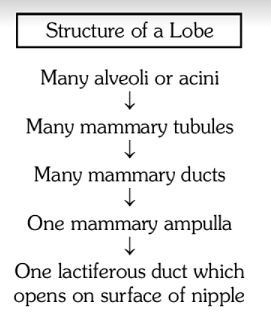 Human milk consists of water and organic and inorganic substances. Its main constituents are fat (fat droplets), casein (milk protein), lactose (milk sugar), mineral salts (sodium, calcium, potassium, phosphorous, etc.) and vitamins. Milk is poor in iron content. Vitamin C is present in very small quantities in milk. The process of milk secretion is regulated by the nervous system. It is also influenced by the psychic state of the mother. The process of milk production is also influenced by hormones of the pituitary gland (already mentioned), the ovaries and other endocrine glands. A nursing woman secretes 1 to 2 litres of milk per day. Milk contains an inhibitory peptide. If the mammary glands are not fully emptied the peptide accumulates and inhibits milk production.

Try yourself:Milk is sucked out from the:
Explanation
View Solution 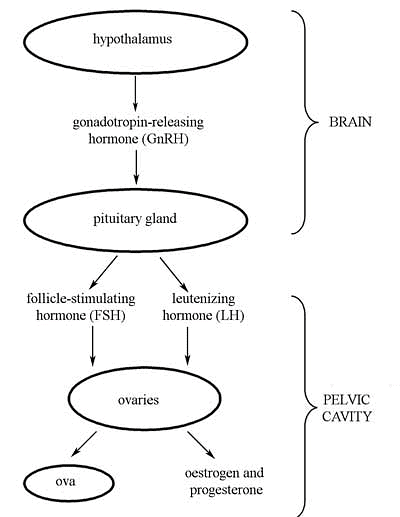 Try yourself:Corpus luteum is the source of secretion of
Explanation

Corpus luteum is produced from the ruptured graafian follicles left behind after ovulation ,this temporary endocrine gland produces progesterone which helps in maintaining the endometrium lining of uterus walls, formation of placenta during pregnancy.

The Onset of Puberty in the Human Females

Try yourself:The changes that occurs in female at the onset of puberty are
Explanation

3. After puberty the uterus goes through the menstrual cycle.

4. Implantation and prenatal growth take place in the uterus.

5. The vagina receives the seminal fluid during copulation.

6. Parturition (the process of the birth of a child) is also an important function of the female reproductive system.

7. Mammary glands of the female secrete milk after parturition.