Flexible pavements are those, which on the whole have low or negligible flexural strength and are rather flexible in their structural action under the loads.A typical flexible pavement consists of four components:

(i) Stress Under Road Surface as per Boussineq’s Equation, 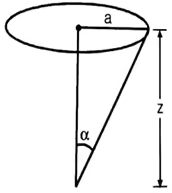 (b) The thickness of Pavement, (T)

where,Ns = Cumulative number of standard axle loadA’ = Number of the commercial vehicle per day when construction is completed considering the number of lanes.n = Design life of the pavement, taken as 10 to 15 years.F = Vehicle damage factor.D = Lane distribution factor

where, T1 & T2 are the thickness values of any two pavement layers & C1 & C2 are their corresponding Cohesiometer values.

(b) Thickness of Pavement Consist of Two layer system,