In this chapter we review the basic concepts of forces, and force laws. Most of this material is identical to material covered in EN030, and is provided here as a review. There are a few additional sections – for example forces exerted by a damper or dashpot, an inerter, and interatomic forces are discussed in Section 2.1.7.

Engineering design calculations nearly always use classical (Newtonian) mechanics. In classical mechanics, the concept of a `force’ is based on experimental observations that everything in the universe seems to have a preferred configuration – masses appear to attract each other; objects with opposite charges attract one another; magnets can repel or attract one another; you are probably repelled by your professor. But we don’t really know why this is (except perhaps the last one).

The idea of a force is introduced to quantify the tendency of objects to move towards their preferred configuration. If objects accelerate very quickly towards their preferred configuration, then we say that there’s a big force acting on them. If they don’t move (or move at constant velocity), then there is no force. We can’t see a force; we can only deduce its existence by observing its effect.

Specifically, forces are defined through Newton’s laws of motion

0. A `particle’ is a small mass at some position in space.

1. When the sum of the forces acting on a particle is zero, its velocity is constant;

2. The sum of forces acting on a particle of constant mass is equal to the product of the mass of the particle and its acceleration;

3. The forces exerted by two particles on each other are equal in magnitude and opposite in direction.

The second law provides the definition of a force – if a mass m has acceleration a, the force F acting on it is

Of course, there is a big problem with Newton’s laws – what do we take as a fixed point (and orientation) in order to define acceleration? The general theory of relativity addresses this issue rigorously. But for engineering calculations we can usually take the earth to be fixed, and happily apply Newton’s laws. In rare cases where the earth’s motion is important, we take the stars far from the solar system to be fixed.

Forces may arise from a number of different effects, including

(i) Gravity;(ii) Electromagnetism or electrostatics;(iii) Pressure exerted by fluid or gas on part of a structure(v) Wind or fluid induced drag or lift forces;(vi) Contact forces, which act wherever a structure or component touches anything;(vii) Friction forces, which also act at contacts.

Some forces have to be measured. For example, to determine friction forces acting in a machine, you may need to measure the coefficient of friction for the contacting surfaces. Similarly, to determine aerodynamic lift or drag forces acting on a structure, you would probably need to measure its lift and drag coefficient experimentally. Lift and drag forces are described in Section 2.6. Friction forces are discussed in Section 12.

2.1.3 Units of force and typical magnitudes

In SI units, the standard unit of force is the Newton, given the symbol N.

The Newton is a derived unit, defined through Newton’s second law of motion – a force of 1N causes a 1 kg mass to accelerate at 1 ms−2.

In US units, the standard unit of force is the pound, given the symbol lb or lbf (the latter is an abbreviation for pound force, to distinguish it from pounds weight)

The conversion factors from lb to N are

As a rough guide, a force of 1N is about equal to the weight of a medium sized apple. A few typical force magnitudes (from `The Sizesaurus’, by Stephen Strauss, Avon Books, NY, 1997) are listed in the table below

When analyzing forces in a structure or machine, it is conventional to classify forces as external forces; constraint forces or internal forces.

External forces arise from interaction between the system of interest and its surroundings.

Examples of external forces include gravitational forces; lift or drag forces arising from wind loading; electrostatic and electromagnetic forces; and buoyancy forces; among others. Force laws governing these effects are listed later in this section.

2.1.5 Mathematical representation of a force.

Force is a vector – it has a magnitude (specified in Newtons, or lbf, or whatever), and a direction.

A force is therefore always expressed mathematically as a vector quantity. To do so, we follow the usual rules, which are described in more detail in the vector tutorial. The procedure is

2. Using geometry or trigonometry, calculate the force component along each of the three reference directions (Fx, Fy, Fz) or (F1, F2, F3) ;

3. The vector force is then reported as

The procedure for representing a position vector is also described in detail in the vector tutorial. To do so, you need to:

4. The position vector is then reported as

In addition to causing acceleration, forces cause objects to deform – for example, a force will stretch or compress a spring; or bend a beam. The deformation can be measured, and the force can be deduced.

The simplest application of this phenomenon is a spring scale. The change in length of a spring is proportional to the magnitude of the force causing it to stretch (so long as the force is not too large!)– this relationship is known as Hooke’s law and can be expressed as an equation

Spring scales are not exactly precision instruments, of course. But the same principle is used in more sophisticated instruments too. Forces can be measured precisely using a `force transducer’ or `load cell’ (A search for `force transducer’ on any search engine will bring up a huge variety of these – a few are shown in the picture). The simplest load cell works much like a spring scale – you can load it in one direction, and it will provide an electrical signal proportional to the magnitude of the force. Sophisticated load cells can measure a force vector, and will record all three force components. Really fancy load cells measure both force vectors, and torque or moment vectors.

Simple force transducers capable of measuring a single force component. The instrument on the right is called a `proving ring’ – there’s a short article describing how it works at A sophisticated force transducer produced by MTS systems, which is capable of measuring forces and moments acting on a car’s wheel in-situ.

The basic design of all these load cells is the same – they measure (very precisely) the deformation in a part of the cell that acts like a very stiff spring.

In this case the `spring’ is actually a tubular piece of high-strength steel. When a force acts on the cylinder, its length decreases slightly. The deformation is detected using `strain gages’ attached to the cylinder. A strain gage is really just a thin piece of wire, which deforms with the cylinder. When the wire gets shorter, its electrical resistance decreases – this resistance change can be measured, and can be used to work out the force. It is possible to derive a formula relating the force to the change in resistance, the load cell geometry, and the material properties of steel, but the calculations involved are well beyond the scope of this course. The most sensitive load cell currently available is the atomic force microscope (AFM) – which as the name suggests, is intended to measure forces between small numbers of atoms. This device consists of a very thin (about 1 μm) cantilever beam, clamped at one end, with a sharp tip mounted at the other. When the tip is brought near a sample, atomic interactions exert a force on the tip and cause the cantilever to bend. The bending is detected by a laser-mirror system. The device is capable of measuring forces of about 1 pN (that’s 10−12 N!!), and is used to explore the properties of surfaces, and biological materials such as DNA strands and cell membranes. 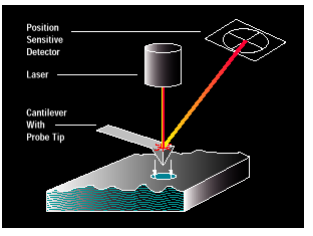 As an engineer, you may need to purchase a load cell to measure a force. Here are a few considerations that will guide your purchase.

1. How many force (and maybe moment) components do you need to measure? Instruments that measure several force components are more expensive…2. Load capacity – what is the maximum force you need to measure?3. Load range – what is the minimum force you need to measure?4. Accuracy5. Temperature stability – how much will the reading on the cell change if the temperature changes?6. Creep stability – if a load is applied to the cell for a long time, does the reading drift?7. Frequency response – how rapidly will the cell respond to time varying loads? What is the maximum frequency of loading that can be measured?8. Reliability9. Cost

In this section, we list equations that can be used to calculate forces associated with