The document Formula of a Compound and Number of Voids Filled and Calculations Involving Unit Cell Dimensions Notes | EduRev is a part of the JEE Course Chemistry for JEE.
All you need of JEE at this link: JEE

Formula of a Compound and Number of Voids Filled • The number of tetrahedral voids produced is twice this number.

• In a compound, the fraction of octahedral or tetrahedral voids that are occupied depends upon the chemical formula of the compound.

Mass of unit cell varies with number of atoms “n” and mass of a single atom “m”. Mathematically mass of unit cell is the product of number of atoms “n” and mass of one atom “m” i.e.Mass of Unit Cell = n × mAlso from quantitative aspect of atoms, mass of one atom can be written in terms of Avogadro Number ( NA ) and molar mass of atom ( M), that is, 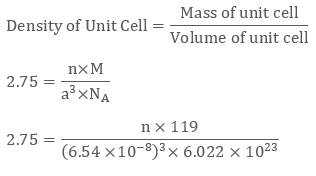 Evaluating we get value of n to be 3.09 ≈ 4Since a number of atoms is 4 we can clearly say that KBr is a face-centred cubic structure.