A pesticide chemical can rarely be used as originally manufactured. The pesticide must be diluted with water, oil, air or chemically inactive (inert) solids so that it can be handled by application equipment and spread evenly over the area to be treated. Usually the basic chemical cannot be added directly to water or mixed in the field with solids, so the manufacturer must further modify his product by combining it with other materials such as solvents, wetting agents, stickers, powders, or granules. The final product is called a pesticide formulation and is ready for use either as packaged or diluted with water or other carriers. 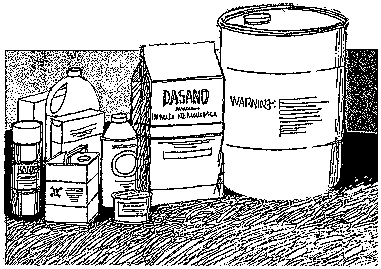 Goals of This Module

A single pesticide is often sold in several different formulations. The applicator should choose the formulation that will best meet his requirements for a particular job. Considerations in making a choice include effectiveness against the pest, habits of the pest, the plant, animal or surface to be protected, application equipment, danger of drift and runoff, and possible injury to the protected surface. Abbreviations are often used to describe the type of formulation involved. These abbreviations are used on labels and in recommendations. Some of the common ones are: WP for wettable powder; F for flowable; G for granules or granular; D for dusts; SP for soluble powder; EC for emulsifiable concentrate; and SC for spray concentrate.

Aerosols (pressurized cans, "bug bombs") contain a small amount of pesticide, or a combination of pesticides that are driven through a fine opening by a chemically inactive gas under pressure, when the nozzle is triggered. Usually they are small, weighing about one pound.

Advantages. Aerosols are very convenient in that they are always ready to use. They are also a convenient way to buy small quantities of a pesticide. They are easily stored and the pesticides do not lose their strength (potency, activity) while in the can during their normal period of use.

Disadvantages. Aerosols are only practical for use in small areas. There is not much active ingredient in any one can. Because of this, it is an expensive way to buy pesticides. Unfortunately, they are also attractive playthings for small children and, if left within reach, are a hazard. Aerosols can be dangerous if punctured or overheated. They may explode and injure someone. Don't ever try to burn aerosol cans.

Principal Uses. Aerosols are most often used in households, backyards, tents and other small areas. They may be used either as space sprays for flying insects or as residual sprays. Usually they are used against insects, but some are designed for plant diseases or weed killers. There are commercial models available for use in greenhouses, barns, etc. These are larger models holding five to ten pounds of material, and are usually refillable.

A prepared dust is a finely ground, dry mixture combining a low concentration of the pesticide with an inert carrier such as talc, clay, or volcanic ash. There is a wide range in size of the dust particles in any one formulation.

Advantages. Dusts are ready to use as purchased and require no mixing. They can be applied with simple, lightweight equipment even in commercial use.

Disadvantages. Because dust particles are finely ground, they may drift long distances from the treated area and may contaminate off target areas. While drifting they are highly visible and may cause public criticism. When used outside, they are easily dislodged from the treated surface by wind and rain and soon become inactive. Never apply dust formulations on a windy day.

Principal Uses. Because of drift, dusts are not recommended for large scale outside use. Outside they are used principally for spot treatments and home gardens. They work best when applied to dewy surfaces in the early morning. Inside, they are used in cracks and crevices for roaches and other domestic insects. Dusts are also used to control lice, fleas, and other external parasites on pets and livestock.

A poisonous bait is a food or other substance mixed with a pesticide that will attract and be eaten by pests and eventually cause their death.

Advantages. Baits are useful for controlling pests such as flies, rats, etc., that range over a large area. Often the whole area need not be covered, just those spots where the pests gather. Baits may be carefully placed in homes, gardens, granaries, and other agricultural buildings so that they do not contaminate food or feed, and can be removed after use. Usually only small amounts of pesticide are used in comparison to the total area treated, so potential environmental pollution is minimized.

Disadvantages. Within the home, baits are often attractive and dangerous to children or pets and therefore must be used with care. Outside, they may kill domestic animals and wildlife as well as the pest. Often the pest will prefer the protected crop or food rather than the bait, so the bait may be ineffective. When larger pests are killed by baits, the bodies must be disposed of. If not, they may cause an odor and/or sanitation problem. Unfortunately, other animals feeding on the poisoned pests can also be poisoned.

Principal Uses. Baits are used inside buildings for pests such as ants, roaches, flies, rats, and mice. They may be used outside in gardens for control of slugs, in dumps and similar areas for rat control, and in fields to control slugs and insects.

Like dusts, pesticide granules are dry, ready-to-use, low concentrate mixtures of pesticide(s) and inert carriers. However, unlike dusts, almost all of the particles in a granular formulation are about the same size and are larger than those making up a dust. A fine granular pesticide pours like ordinary salt or sugar.

Advantages. Granules are ready to use as purchased, with no further mixing necessary. Because the particles are large, relatively heavy, and more or less the same size, granulars drift less than most other formulations. There is little toxic dust to drift up to the operator's face and be inhaled by him. They can be applied with simple, often multi -purpose equipment such as seeders or fertilizer spreaders. They also will work their way through dense foliage to a target underneath.

Disadvantages. With a few exceptions, granulars are not suitable for treating foliage because they will not stick to it.

Principal Uses. Granular pesticides are often used for soil treatments to control pests living at ground level or underground. They may be used as soil systemics, that is, formulations applied to soil that are absorbed into the plant through the roots and carried throughout the plant. Granular herbicides and/or insecticides are frequently applied in combination with fertilizers on turf, thereby saving labor. Granular formulations may be the choice when applied by agricultural aircraft where drift is a problem, or when treating water for mosquitoes where there is a heavy foliage cover over the water.

These preparations are usually solutions in highly refined oils that contain low concentrations of the pesticide. They are generally used as purchased.

Advantages. Low concentrate solutions are designed to be sprayed as purchased. Because of this, no mixing is necessary and this lessens the chances for making mistakes. Household formulations have no unpleasant odors and usually the liquid carrier evaporates quickly and does not stain fabrics, furniture, etc.

Disadvantages. Low concentrate formulations are usually fairly expensive for the amount of actual pesticide bought and the uses for such materials are few and specialized.

Principal Uses. Low concentrate solutions may be used in the household for flying or crawling insects and for mothproofing clothes. In barns they are used as space sprays and fly sprays for livestock. They are also used as prepared sprays for mosquito control and shade tree insect control.

These preparations are usually solutions containing a high concentration of the pesticide. Most of them are designed to be mixed with water or oil and contain wetting agents, stickers, and other additives. They may contain as much as eight or more pounds of a pesticide per gallon of concentrate.

Advantages. These formulations contain a high concentration of pesticide, so the price per pound of active ingredient is rather low. Only moderate agitation is required in the tank, so they are especially suitable for low -pressure, low-volume weed sprayers, mist blowers, and small home ground sprayers. They are not abrasive and do not settle out when the sprayer is not running. There is little visible residue, which generally allows their use in populated areas. Because of the high pesticide content, the applicator is not required to store, transport, or handle a large bulk of chemical for a particular job.

Disadvantages. It is easy to underdose or overdose because of the high concentration of pesticide, if directions for mixing are not carefully followed. Mixtures of emulsifiable concentrates may be phytotoxic. Also, because of the high concentration and liquid form, which is usually easily absorbed through the skin, there may be hazard to the applicator. The hazard of improperly stored concentrates can also be high. Because of their solvents, most liquid concentrates cause rubber hoses, gaskets, and pump parts to deteriorate rapidly unless they are made of neoprene rubber. Some formulations cause pitting in car finishes. 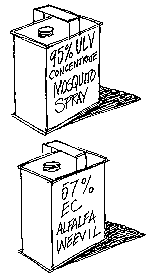 Advantages. As is true with liquid concentrates, the pesticides in wettable powders are relatively low in cost and easy to store, transport, and handle. They are safer to use on tender foliage and usually do not absorb through the skin as rapidly as liquid concentrates. They are easily measured and mixed when preparing spray suspensions.

Disadvantages. Wettable powders may be hazardous to the applicator if he inhales their concentrated dust while mixing. They require good agitation (usually mechanical) in the sprayer tank and will settle quickly if the sprayer is turned off. They cause some pumps to wear out quickly. Their residues are more subject to weathering than liquid concentrates, and being more visible may soil cars, windows, and other finished surfaces.

Fumigants are pesticides in the form of poisonous gases that kill when absorbed or inhaled.

Advantages. A single fumigant may be toxic to many different forms and types of pests. Therefore, a single treatment with one fumigant may kill insects, weed seeds, nematodes, and fungi. Fumigants penetrate into cracks, crevices, burrows, partitions, soil, and other areas that are not gastight and expose hidden pests to the killing action of the pesticide.

Disadvantages. The area to be fumigated almost always must be enclosed. Even in outdoor treatments the area must be covered by a tarp or the fumigant incorporated into the soil, so that it doesn't escape. Frequently, fumigants are highly toxic. Proper techniques and all recommended protective gear must be used when applying them. Most fumigants burn the skin.

Principal Uses. Fumigants are used inside dwellings or other buildings to control vermin that cannot easily be reached by other pesticide formulations. They are used in ports of entry and at state borders for treatment of plants and other materials to prevent the introduction of new pests into an area. Stored grain pests are often controlled by fumigants. Soil is fumigated to sterilize it from pests before planting.