A representation for aperiodic signals

Although this covers a broad class of functions, it puts a serious restriction on the function. That is, Periodicity . So the next question that naturally pops up in one's mind is , "Can we extend our idea of the Fourier series so as to include non periodic functions ?" . This precisely is our goal for this part , the basic inspiration being, an aperiodic signal may be looked at as a periodic signal with an infinite period. Note what follows is not a mathematically rigourous excercise, but will help develop an intuition for the Fourier Transform for aperiodic signals.

Clearly this is our familiar square wave . Let's see what happens to its Frequency domain representation as we let T to approach infinity . We know that the Fourier coefficients of the above function can be written as

multiple of the fundamental frequency of the signal. Let's plot the Frequency Domain representation of the signal, which we shall also call the spectrum of the signal.Note the horizontal axis represents frequency, although the points marked indicate only scale. 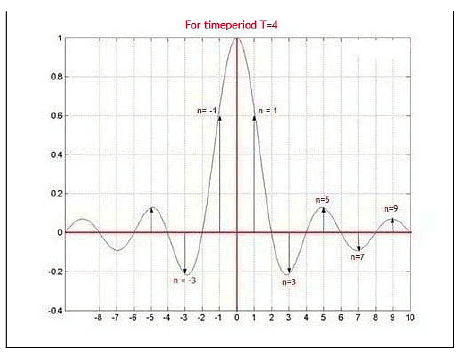 Now let's double the time period .the expression for the Fourier coefficients will become :

Since frequency is reciprocal of time period

as the time period T increases, the distance between the consecutive frequencies f0 in the spectrum will reduce ,and we'll get the following plot. 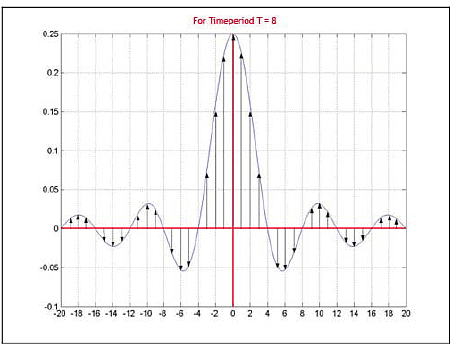 If we reduce the natural frequency by another half ( that is increase the time period by a factor of two ) , we'll get the following frequency spectrum : 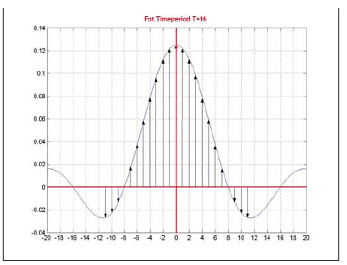 Notice as the period of the periodic signal is increased, the spacing between adjacent frequency components decreases.

Finally when the period of the signal tends to infinity , i.e. the signal is aperiodic, the frequency spectrum becomes a continuous.By looking at the plots we can infer that as we will increase the time period more and more, we'll get more and more closely placed frequencies in the spectrum, i.e.: complex exponentials with closer and closer frequencies are required to represent the signal. Hence if we let T to approach infinity we'll get frequency infinitesimally close to each other. This is same as saying that we'll get every possible frequency and hence the whole continuous frequency axis. Thus our frequency spectrum will no more be a series , but will be a continuous function. The representation will change from a summation over discrete frequencies to an integration over the entire frequency axis. The function, which (like the Fourier Series coefficients) gives what is crudely the strength of each complex exponential in the representation is formally called the Fourier Transform of the signal. The representation takes the form:

The Fourier Transform of a function x(t) can be shown to be:

Recap:Under certain conditions, an aperiodic signal x(t) has a Fourier transform X(f) and the two are related by:

converges to x(t), except at points of discontinuity provided:

2) x(t) has only a finite number of extrema in any finite interval.

3 ) x(t) has only a finite number of discontinuities in any finite interval. For example the following function (the so called Dirichlet's function ) will not satisfy this condition.