1. Sentinel approachIn this approach it uses special characters called sentinel characters to indicate where frames start and end. This approach is called character stuffing because extra characters are inserted in the data portion of the frame.Ex:    1. Binary Synchronous Communication (BISYNC)2. Point to Point Protocol2. Byte Count ApproachIn this approach no of bytes in frame are counted and entered in the header. The COUNT Field specifies how many bytes are contained in the frame‟s body. Ex:    1.Digital Data Communication Message Protocol

2. BIT ORIENTED PROTOCOLS:It views the frames as a collection of bits. The Synchronous Data Link Control (SDLC) protocol developed by IBM is an example of a bit oriented protocol. It was later standardized by the ISO as the High Lever Data Link Control (HDLC)

HDLC denotes both the beginning and the end of a frame with the distinguished bit sequence 01111110. To guarantee that a special sequence does not appear in advertently anywhere else in the frame, HDLC uses a process called bit stuffing.

On the sending side, any time five consecutive 1s have been transmitted from the body of the message, the sender inserts a 0 before transmitting the next bit. On the receiver side, should five consecutive 1s arrive, the receiver makes its decision based on the next bit it sees. If the next bit is a 1, then one of the two things is true. Either this is the end of the frame or an error has been introduced. By looking at the next bit, it can conclude. If it sees a 0, then it is the end of frame. It else, then there must have an error and the whole frame has been discarded.3. Clocks Based Protocol:The Synchronous Optical NETwork (SONET) is one of the protocols using the clock based framing approach.SONET:It was developed by the ANSI for digital transmission over optical network. It addresses both the framing and encoding problems. A SONET frame has some special information to distinguish where the frame starts and ends. 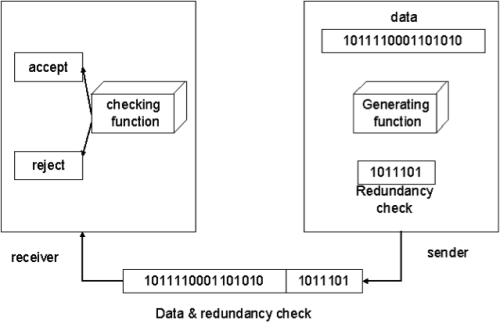