Reasoning situations based on games and tournaments have become one of the common occurrences in Aptitude exams, and are a special favorite of management entrance exams like the CAT, XAT and other top exams. While, the solving of such questions is based on complete common sense based understanding of the situations involved, it might be a good idea to work on extracting certain standard analysis that goes into solving the various kinds of questions that can be classified under the games and tournaments chapter.

1. Analysis tools for a tennis/badminton or a knockout tournament:A tennis/badminton tournament is played under the knockout format. In such cases matches between players have the format that the loser gets eliminated and the winner moves into the next round. The following structures apply in such cases:The number of rounds in the tournament is decided on the basis of the number of players entered. Typically, in a Grand Slam tournament in tennis there are 128 players and the tournament consists of 7 rounds. This can be visualized as:

Seeding and Logic Around Seeding:

Often, in knockout tournaments like tennis and badminton, seedings are given to the top players – based on who is favored to win the tournament. In such cases, Seed Number 1 is often referred to as the top seed. Such tournaments, have their draws based on these seedings only. For instance, suppose there is tournament having 32 players and a Seeding is given for players from 1 to 32. In such a tournament, the first round consists of 16 matches and who plays who in the matches are defined by the seed numbers. The following table would make this clear to you:

The following points need to be understood with respect to the above table:

Visualise the rounds as: 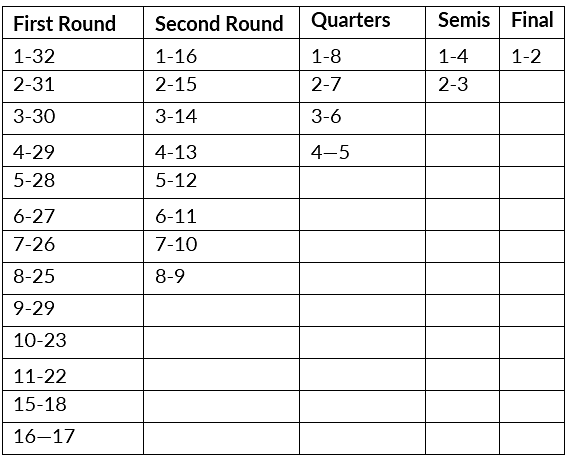 2. Analysis tools for a Hockey/Football tournament (round robin):

Hockey and Football tournaments that are played in a round robin format are also interesting cases for building reasoning questions. A typical table of standings for a hockey/football tournament after two round robin rounds with the following results in the Matches Played: A vs F 5-0; A vs E 6-2; B vs C 2-1;B vs D 1-1; C vs D 4-1; E vs F 0-0, would look as follows:

Often in such tables, the individual match results are removed and you are asked to deduce the match results based on the information in the table.In such cases, the following observations and overall rules would always hold:

Besides these certain score specific deductions are also possible. Some of these (indicative list) are as follows:

These are just an indicative list and I would expect you to make sense of other such cases that you would see regularly in such tables.

A typical cricket batting score card consists of the names of the players, with their runs scored given individually and the overall team score.

The inning is terminated at the fall of the 10th wicket.

Note: Here we are using the formula for combinations where NCR =

Sometimes tournaments are held on a round-robin cum knockout basis. In such tournaments, the initial rounds are played in multiple groups on a round robin format – where teams within a group play each other once, and the top teams advance to the next round- which is held on a knock out basis, starting with either the semi final or quarter final or pre quarter final. The world cup football is a classic example of this. 8 groups of 4 team each participate in the group stages, followed by the top two teams of each group qualifying to play the pre- quarterfinals, which is played in a knock out format.