INTRODUCTION   Combustion processes generate various primary and secondary air pollutants such as carbon oxides (mainly CO), nitrogen oxides (NOx), sulphur oxides (SOx), ozone, along with organic acid, inorganic acid, petrochemical oxidant gas and hydrocarbons (HC). Different treatment processes are applied for controlling these and other gaseous emissions. These processes include adsorption and absorption. Selection of appropriate technique depends in part, physical and chemical characteristic of specific gas and the vapour phase compounds present in the gas stream.  For stationary air pollution sources, we can select single or combined air pollution control technique. Variety of devices are used for controlling gaseous pollutant, and choosing most cost effective, most cost efficient unit requires careful attention to the particular operation for which control devices are intended. In order to control the emissions within given standard emissions it is necessary to monitor emissions carefully after selecting best control technique.

PROPERTIES OF GAS STREAM FOR SELECTION OF A CONTROL SYSTEM

The selection and design of a gaseous contaminant control system is done based on some specific information concerning the gas stream to be treated. Following are some factors considered during selection of a process

(1) Adsorption processes are used extensively on large-scale applications having solvent vapour concentrations in the range of 10 to 10,000 ppm.

(2) Prior to becoming saturated with the solvents, the adsorbent is isolated from the gas stream and treated to drive the solvent compounds out of the solid adsorbent and into a small volume, high concentration gas stream.

(3) The desorbed gas stream is then treated to recover and reuse the solvents.

(4) The adsorbent is cooled (if necessary) and returned to adsorption service.

(5)  Because the adsorbent is treated and placed back in service, these adsorption processes are termed regenerative.

(6)  Adsorption processes usually operate at efficiencies of 90% to 98% over long time periods.

Step 1: The contaminant diffuses from the bulk gas stream to the external surface of the adsorbent material .

Step 2: The contaminant molecule migrate external surface to the macropores, transitional pores, and micropores within each adsorbent.

Step 3: The contaminant molecule adheres to the surface in the pore. Following figure illustrates this overall diffusion and adsorption process.

Isotherm: The isotherm is a plot of the adsorbent capacity versus the partial pressure of the adsorbate at a constant temperature. Adsorbent capacity is usually given as pound of adsorbate per 100 pound of adsorbent. These type of graphs are used to estimate the quantity of adsorption. Isotherms can be concave upward, concave downward, or “S” shaped .

Isostere: The isostere is a plot of the natural log of the pressure versus the reciprocal of absolute temperature (ln(p) vs. 1/T) at a constant amount of vapour adsorbed. Adsorption isostere lines are straight for most adsorbate-adsorbent systems. The isostere is important because the slope of the isostere corresponds to the differential heat of adsorption. The total or integral heat of adsorption is determined by integration over the total quantity of material adsorbed .

Isobar: It is a plot of the amount of vapour adsorbed versus temperature at a constant pressure. Below figure shows an isobar line for the adsorption of benzene vapours on activated carbon. 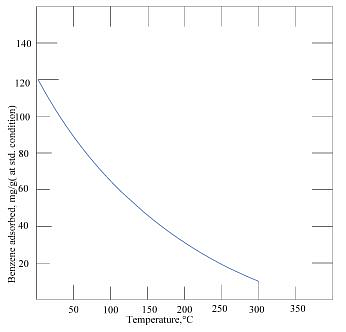 Thermal Swing: The bed is heated so that the adsorption capacity is reduced to a lower level. The adsorbate leaves the surface of the carbon and is removed from the vessel by a stream of purge gas. Cooling must be provided before the subsequent adsorption cycle begins.  Pressure Swing: The pressure is lowered at a constant temperature to reduce the adsorbent capacity.

Inert Purge Gas Stripping: The stripping action is caused by an inert gas that reduces the partial pressure of the contaminant in the gas phase, reversing the concentration gradient. Molecules migrate from the surface into the gas stream .

Displacement Cycle: The adsorbates are displaced by a preferentially adsorbed material. This method is usually a last resort for situations in which the adsorbate is both valuable and heat sensitive and in which pressure swing regeneration is ineffective.

Temperature: For physical adsorption processes, the capacity of an adsorbent decreases as the temperature of the system increases. With increase in the temperature, the vapour pressure of the adsorbate increases, raising the energy level of the adsorbed molecules. Adsorbed molecules now have sufficient energy to overcome the van der Waals’ attraction and migrate back to the gas phase. Molecules already in the gas phase tend to stay there due to their high vapour pressure. 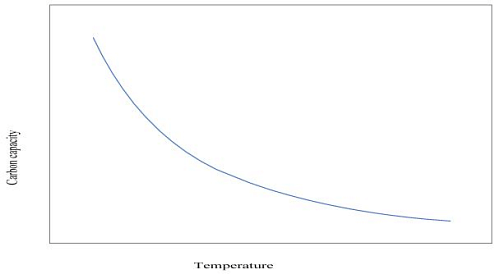 In order to achieve 90% or more capture efficiency, most carbon adsorption systems are designed for a maximum airflow velocity of 100 ft/min (30 m/min) through the adsorber. A lower limit of at least 20 ft/min (6 m/min) is maintained to avoid flow problems such as channeling. Gas velocity through the adsorber is a function of the cross-sectional area of the adsorber for a given volume of contaminant gas.

Humidity: Activated carbon has more affinity towards nonpolar hydrocarbons over polar water vapour. The water vapour molecules in the exhaust stream exhibit strong attractions for each other rather than the adsorbent. At high relative humidity, over 50%, the number of water molecules increases to the extent that they begin to compete with the hydrocarbon molecules for active adsorption sites. This reduces the capacity and the efficiency of the adsorption system .

Bed Depth: Providing a sufficient depth of adsorbent is very important in achieving efficient gas removal due to the rate that VOC compounds are adsorbed in the bed. There are practical minimum and maximum limits to the bed depth. 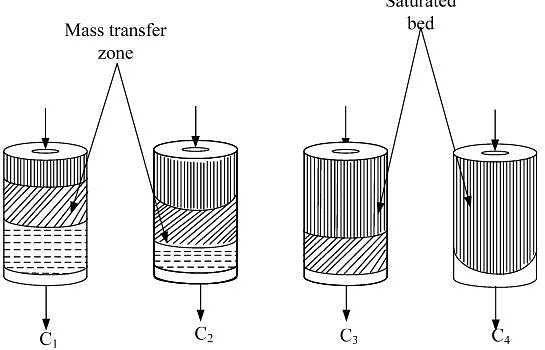 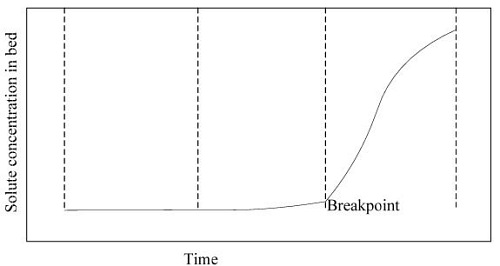