GAUSS’ LAWThe mathematical relation between electric flux and the enclosed charge is known as Gauss law for the electric field. It is one of the fundamental laws of electromagnetism.The law was proposed by Joseph- Louis Lagrange in 1773 and later followed and formulated by Carl Friedrich Gauss in 1813.Let us consider a positive point charge q located at the centre of a sphere of radius r, as shown in figure 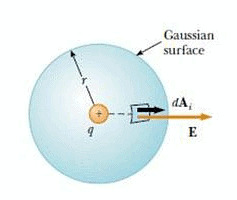 From the equation, E =

The field lines are directed radially outward and hence are perpendicular to the surface at every point on the surface . That is, at each surface point, E is parallel to the vector ΔAi representing a local element of area ΔAi surrounding the surface point. Therefore,E ⋅ ΔAi = EΔAiAnd from equation, Φ𝐸 = ∮𝐸 ⋅ 𝑑𝐴 = ∮ 𝐸𝑛 𝑑𝐴 we find that net flux through are gaussian surface is

where we have moved E outside of the integral because, by symmetry, E is constant over the surface and given by E =

Furthermore, because the surface is spherical A=4πr2. Hence, the net flux through the gaussian surface is

Now, we know that,K𝑒 = 1/4𝜋ε₀Therefore,𝚽𝐄 = 𝐪/𝛆₀Now, observe that the net electric flux through the spherical Gaussian surface depends only on the charge enclosed within the close Gaussian surface and the permittivity of the free space. It does not depend on the location of the charge or the Electric field produced by the charge.

Obviously, we derived it for the simplest charge configuration, but it holds true for all cases.In general case,

would vary over the surface of the sphere and the vector

would not be everywhere perpendicular to the surface. But still the flux through the spherical surface is q/(ε₀).

Note: the net flux through any closed surface surrounding a point charge q is given by q/(ε₀) and is independent of the shape of that surface.GAUSS LAW FOR MULTIPLE CHARGESLet us calculate flux for many charges. We once again use the superposition principle, which states that the electric field due to many charges is the vector sum of the electric fields produced by the individual charges. Therefore, we can express the flux through any closed surface as:

is the total electric field at any point on the surface produced by the vector addition of the electric fields at that point due to the individual charges. Consider the system of charges shown in figure. 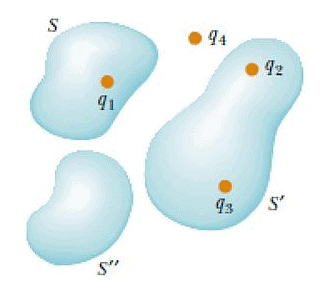 Gauss’s law, which is a generalization of what we have just described, states that the net flux through any closed surface is

where qenc represents the net charge inside the surface and

represents the electric field at any point on the surface.

Some points to be emphasized about the gauss law

Note: That the gaussian surface should not contain any finite non-zero charge.