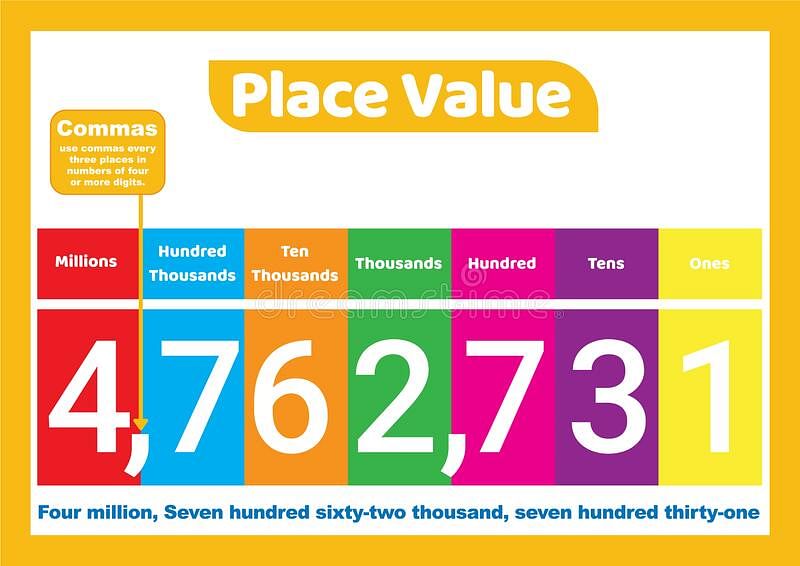 We have done the concept of place value in earlier classes and might remember the expansion of a two-digit number. Let us hit the refresh button and revisit the general forms of numbers.

Now when we start from the right i.e from 7 to 6, the place of seven is known as Ones and that for 6 is known as Tens.

Suppose we have a 3 digit number: 345. We can label the places as follows.

The value of hundreds place is 100. Similarly, for tens and ones, it is 10 and 1 respectively. As you might remember,

Till now we have been studying numbers up to 5 digits. Let us expand our scope to large numbers, starting off with the following knowledge:

1. The Indian System of Numeration: (i.e. General Form of Numbers)

2. The International System of Numeration:

Thus we can expand our understanding of the general form of numbers with 9 digits and more.

Further, its number name is given as:

With all the information about the general form of numbers, we can easily compare them. When we compare two numbers we start comparing the digits of each number from left. The two scenarios that arise are- they can have an unequal or equal number of digits.In the first case i.e. for comparing numbers with an unequal number of digits, obviously, the number with more digits is greater.Example: Among 12, 123, 1234 and 12345 the greatest number is 12345 since it is a 5 digit number.For comparison of two numbers having an equal number of digits, we compare the digits at the places starting from left.Example: If we need to compare 4567 and 4578, we start by looking at the digits of both numbers at the leftmost place(here thousand).As both are the same, we move on to the hundred places. Here also the digit 5 is the same in both. Further, we move on to the tens place. Here we can see that the digit(6) at tens place of 4567 is less than the digit(7) at tens place of 4578. Hence, we conclude that 4578 is greater than 4567.

Note: Observe that ascending and descending orders are reverse of each other.

Often in real-life situations, knowing the exact number of things is not as important. An estimate is far more practical and easier to calculate. For example, the Prime Minister of India does not need to know the exact number of students pursuing higher education in India. He only requires an estimate so he can form policies accordingly.To find an estimate is easier, cheaper and less time-consuming than an actual count in many cases. If the situation does not warrant an exact count, estimation is a way to go. Let us learn a few methods related to estimation.

1. Rounding off to nearest Tens 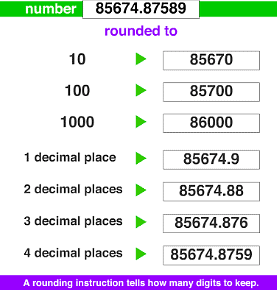 2. Rounding off to Hundreds

Example: Round off the following numbers

Sometimes we don’t just estimate numbers, we all estimate certain mathematical productions. It makes calculating easier while giving us an estimation of the answer we require.Example: You and your friends went on a donation drive. You each collected 435, 664,  410 and 239 rupees. So if you wanted to add up the amounts, an estimation of the sum would be efficient.We will begin by rounding off the numbers to the nearest tens and then adding up the estimated numbers(i) Estimated Sum: 440 + 660 + 410 + 240 = 1750(ii) Actual Sum: 435 + 664+ 410 + 239 = 1748As you can see from the calculations above the sums are very close to each other. The estimation of the sums was easier to calculate and time-saving as well. Let us now see some examples of estimation of differences and products.

(i) If we round off to thousands, the answer will be:

This does not seem to be an accurate answer at all.

(ii) Now we round off to hundreds, the answer will be:

The difference is 5200, and this seems like an accurate and reasonable estimation.