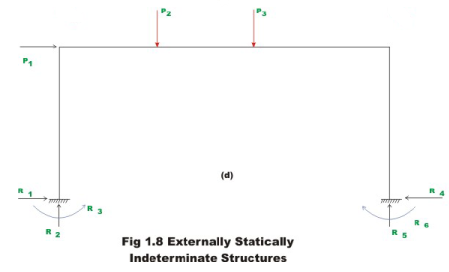 Now, consider trusses shown in Figs. 1.9(a) and (b). In these structures, reactions could be evaluated based on the equations of equilibrium. However, member forces can not be determined based on statics alone. In Fig. 1.9(a), if one of the diagonal members is removed (cut) from the structure then the forces in the members can be calculated based on equations of equilibrium. Thus, structures shown in Figs. 1.9(a) and (b) are internally indeterminate to first degree.The truss and frame shown in Fig. 1.10(a) and (b) are both externally and internally indeterminate. 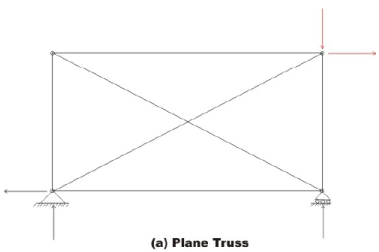 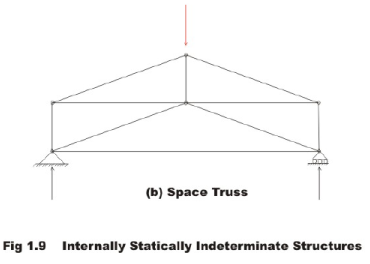 So far, we have determined the degree of indeterminacy by inspection. Such an approach runs into difficulty when the number of members in a structure increases. Hence, let us derive an algebraic expression for calculating degree of static indeterminacy.

Hence total number of equations that could be written is 2 j.

If 2 j = m + r then the structure is statically determinate as the number of unknowns are equal to the number of equations available to calculate them. The degree of indeterminacy may be calculated as

We could write similar expressions for space truss, plane frame, space frame and grillage. For example, the plane frame shown in Fig.1.11 (c) has 15 members, 12 joints and 9 reaction components. Hence, the degree of indeterminacy of the structure is

Please note that here, at each joint we could write 3 equations of equilibrium for plane frame. A beam which is supported on roller on both ends (vide. Fig. 1.14) on a horizontal surface can be in the state of static equilibrium only if the resultant of the system of applied loads is a vertical force or a couple. Although this beam is stable under special loading conditions, is unstable under a general type of loading conditions. When a system of forces whose resultant has a component in the horizontal direction is applied on this beam, the structure moves as a rigid body. Such structures are known as kinematically unstable structure. One should avoid such support conditions. A structure apart from satisfying equilibrium conditions should also satisfy all the compatibility conditions. These conditions require that the displacements and rotations be continuous throughout the structure and compatible with the nature supports conditions. For example, at a fixed support this requires that displacement and slope should be zero. 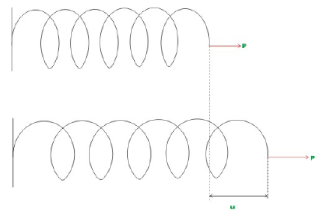 Consider linear elastic spring as shown in Fig.1.15. Let us do a simple experiment. Apply a force P1 at the end of spring and measure the deformation u1. Now increase the load to P2 and measure the deformation u2. Likewise repeat the experiment for different values of load P1, P2,......Pn. Result may be represented in the form of a graph as shown in the above figure where load is shown on y-axis and deformation on abscissa. The slope of this graph is known as the stiffness of the spring and is represented by k and is given by

The spring stiffness may be defined as the force required for the unit deformation of the spring. The stiffness has a unit of force per unit elongation. The inverse of the stiffness is known as flexibility. It is usually denoted by a and it has a unit of displacement per unit force.

The stiffness of a structure is defined as the force required for the unit deformation of the structure. Hence, the value of stiffness for the beam is equal to

As a second example, consider a cantilever beam subjected to a concentrated load (P) at its tip. Under the action of load, the beam deflects and from first principles the deflection below the load (u) may be calculated as,

For a given beam of constant cross section, length L , Young’s modulus E , and moment of inertia Izz the deflection is directly proportional to the applied load. The equation (1.10) may be written as

Where a is the flexibility coefficient and is

Usually it is denoted by aij the flexibility coefficient at i due to unit force applied at j . Hence, the stiffness of the beam is

In this lesson the structures are classified as: beams, plane truss, space truss, plane frame, space frame, arches, cables, plates and shell depending on how they support external load. The way in which the load is supported by each of these structural systems are discussed. Equations of static equilibrium have been stated with respect to planar and space and structures. A brief description of static indeterminacy and kinematic indeterminacy is explained with the help simple structural forms. The kinematically unstable structures are discussed in section 1.6. Compatibility equations and force-displacement relationships are discussed. The term stiffness and flexibility coefficients are defined. In section 1.8, the procedure to calculate stiffness of simple structure is discussed.