Organic Reagents: Organic reagents can be classified into two categories such as electron rich reagents like Base/Nucleophile and Electron deficient reagents like Acid/Electrophile 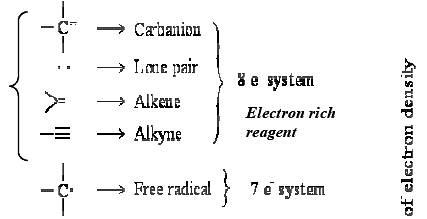 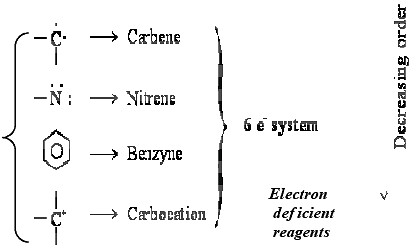 (2)  With complete octet and lone pair.

(5) Organometallic compounds [OMC]: The alkyl or aryl groups of OMC are nucleophile such as,

All enolate are ambident ligands.

Note: Na+ is neit her Arrhenius acid or Lewis acid nor electrophile

3. Ambiphiles: Those reagents which can act both electrophile and nucleophile. e.g., 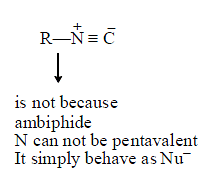 Note: Br2, I2 and ICl are also ambiphiles.

Q1. H2O (8 e– having lone pair) or NaOH is electron rich species, where H2O work as base and where H2O

Here I am showing different role of H2O:

Q2. About any electron rich species or electron deficient species following type of question arises in mind that:

Now how will we give the answer: Electronic Effect

Inductive Effect: In a covalent single bond between unlike atoms, the electron pair forming the s bond is never shared absolutely equally between the two atoms; it tends to be attracted a little more towards the more electronegative atom of the two.

Thus in an alkyl chloride, the electron density tends to be greater nearer chlorine than carbon, as the former is the more electronegative; this is generally represented.

If the carbon atom bonded to chlorine is itself attached of further carbon atoms, the effect can be transmitted further.

Functional groups can be classified as electron withdrawing (–I) or electron donating (+I) groups relative to hydrogen. This means, for example, that NO2, a –I group, will draw electrons to itself more than a hydrogen atom would if it occupied the same position in the molecule.

Thus, in α-nitrotoluene, the electrons in the N–C bond are farther away from the carbon atom than the electrons in the H–C bond of toluene.  Similarly, the electrons of the C–Ph bond are farther away from the ring in a-nitrotoluene than they are in toluene. Field effects are always co mparison effects. For example, compare the –I or +I effect of one group with another (usually hydrogen). Therefore, it may be said that, compared wit h hydrogen, the NO2 group is electron withdrawing and the O– group is electron donating or electron releasing.  However, there is no actual donating or withdrawing of electrons, but rather electron distortion or electron redistribution. While withdrawing and releasing terms are convenient to use, the terms merely represent a difference in the posit ion of electrons due to the difference in electronegativity between H and NO2 or between H and O–.