The document General Properties of Embryonic Development (Part - 1) NEET Notes | EduRev is a part of the NEET Course Biology Class 12.
All you need of NEET at this link: NEET

As a result of segmentation or cleavage activities, unicellular zygote changes into a solid ball like multicellular structure. In the later stage of cleavage, clusters of sticky, cohering, protruding(outside) blastomeres are produced, which look like mulberry. 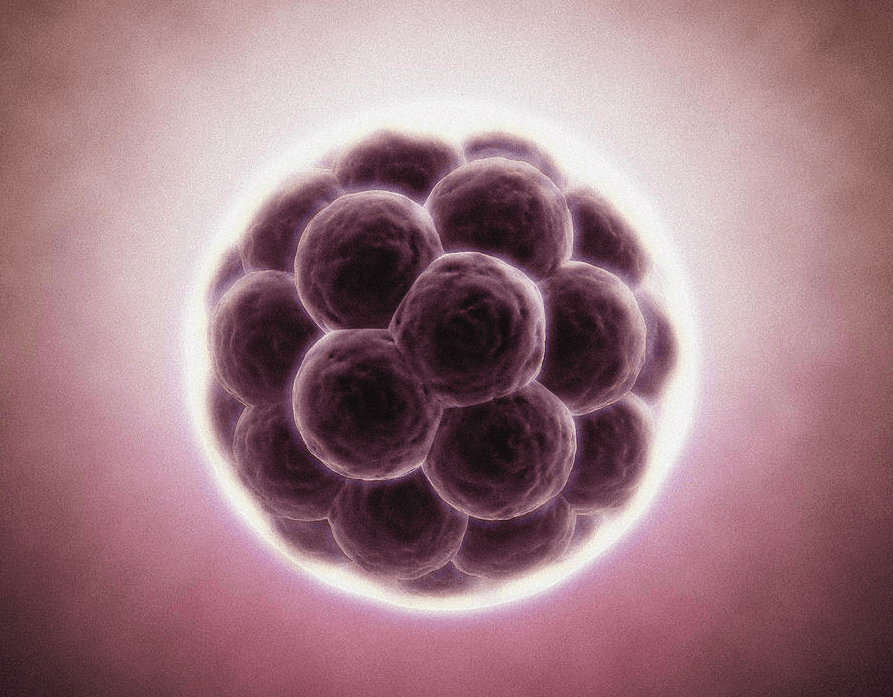 This stage is termed as morula stage.

Cleavage continues in solid ball like morula and new formed blastomeres start rearranging themselves. Cell - aggregation starts in blastomeres, due to the movement of these blastomeres a cavity appears in the embryo, it is called as blastocoel. This cavity is schizogenous cavity in origin i.e. it is formed by the separation of cells. Cell aggregation is also known as cohesion. Blastomeres arrange themselves in the form of a layer around the blastocoel, this layer is termed as blastoderm. The embryonic stage is now called blastula, and its formative activities is called blastulation. The shape of blastula depends on so many factors e.g. size of eggs, amount of yolk, distribution of yolk in the eggs, frequency of cleavage and number of cleavage divisions. According to these factors, we can classify blastula of different animals indifferent categories.

(a) Coeloblastula: Blastocoel is wide and clear in this blastulation, it is completely surrounded by blastomeres on all the sides i.e., blastocoel cavity is situated totally inside the embryo. Blastomeres are very small in size as compared to blastocoel. 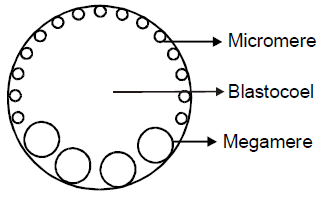 Coeloblastula of amphibians is called amphiblastula because in it blastocoel cavity is accentric in position and  s more towards the animal pole (amount of yolk is more towards the vegetal pole). Amphiblastula of sponges is a free swimming larva, its blastomeres are flagillated. This larva swims freely with the help of these flagella. It is a unique feature in sponges.(b) Stereoblastula :- In this blastula, blastocoel is very narrow or obliterated. Blastomeres are large as compared to blastocoel. 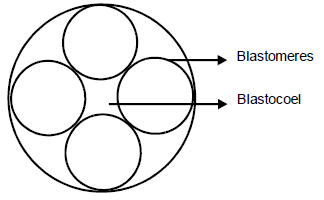 (c) Discoblastula: It is found in those animals which have discoidal eggs. There is a cavity present in between blastomeres and yolk, it is called the sub-germinal cavity. It is a type of cavity, which is surrounded by yolk on one side and by blastomeres on the other side. 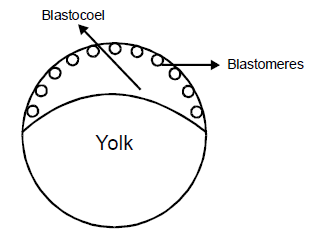 (d) Superficial blastula or periblastula: In centrolecithal eggs, cleavage occurs only in peripheral region. The layer of blastomeres surrounds the centrally situated yolk. Blastocoel is absent in this type of blastula. 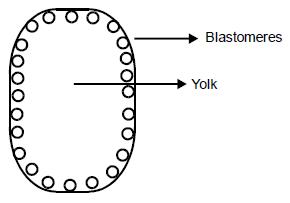 (e) Blastocyst - Blastula of Eutherian & Metatherian mammals is called blastocyst, because blastula is in the form of a cyst.

(b) Morphogenetic Movements: During gastrula stage blastomere perform amoeboid movement and reach to their definite place in embryo because after the gastrulation organogenesis has to start in embryo. 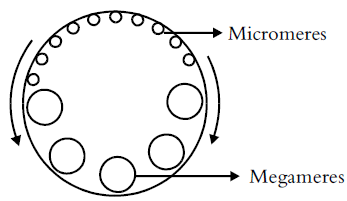 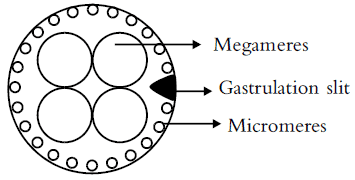 These micromeres perform amoeboid movement and cover the megamere from outside. Megameres without any movement establish inside the embryo because they are heavily filled with yolk . At one definite place in embryo micromeres do not perform any movement to cover the megameres this place occurs in the form of depression is called gastrulation slit or future blastopore. It is formed in grey crescent area.

In some animals there occur special type of epiboly is called Apiauxis. In this process ectoderm forming micromere are received from two sources.

(1) By the division of micromere

(i) Invagination: Emboly mainly takes place by invagination in animal with simple coeloblastula. In coeloblastula a part of blastoderm invaginate in embryo, as a result blastocoel cavity degenerates and new cavity forms outside to inside called archenteron. Opening of archenteron is called blastopore. Archenteron forms alimentary canal .Blastopore forms mouth in protostomia animals and anus in deuterostomia animal. As a result of invagination blastomere which fill the blastocoel form mesoderm and endoderm. Blastomere of outer layer form ectoderm i.e. all the three germinal layer are formed by emboly in coeloblastula. Epiboly is absent in coeloblastula.

(ii) Involution : Involution i.e. rolling movement of blastomere. Emboly mainly takes place by involution in animal with amphiblastula. In amphiblastula micromeres move from different directions towards future blastopore,this movement is called convergence. After convergence, second step is involution (i.e. blastomere perform rolling movement and enter in blastocoel with the help of future blastopore) now all the blastomeres move in different direction in blastocoel, this is called divergence. As a result of divergence blastocoel cavity degenerates and new cavity called archenteron is formed. Opening of archenteron is called blastopore. All the involuted blastomeres are collectively called 'Chorda mesoderm'. At the end of gastrula, outgrowth occurs in some megamere i.e. megameres evaginate outside and close the blastopore temporarily (yolk-pluge stage) yolkpluge stage indicates completion of gastrulation. 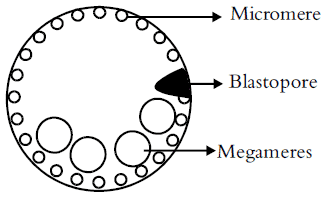