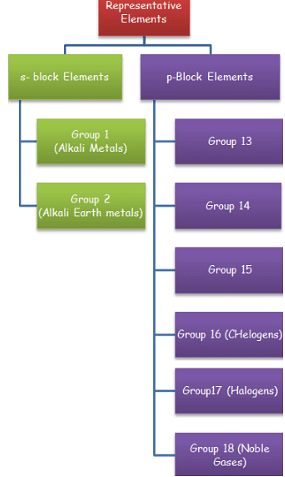 The elements in the long form of the periodic table has been divided into four blocks, namely s, p, d & f blocks. The elements of group I & II receive their last electron in s-orbital. So they are called as s – block elements.The metals Lithium (Li), sodium (Na), potassium (K), rubidium (Rb), cesium (Cs) and francium (Fr) which have one electron in their outermost shell belongs to group I and are called alkali metals as they react with water to form hydroxides which are strong bases or alkalies.The elements of group II are Berryllium (Be), Magnesium (Mg), Calcium (Ca), Strontium (Sr), barium (Ba) and radium (Ra) which have two electrons in their outermost shell.All these elements are also metallic in nature and are commonly known as alkaline earth metals with the exception of beryllium. Because of their low density, alkali metals and alkaline earth metals are called lighter metals.Both alkali and alkaline earth metals are highly reactive and hence do not occur in free state but found in combined state. Whereas alkali metals mostly occur as halides, oxides, silicates, borates and nitrates, alkaline earth metals mainly occur as silicates, carbonates, sulphates and phosphates.Some alkali & alkaline earth metals occur abundantly in nature. Calcium is the fifth, magnesium is the sixth, sodium is seventh and potassium is eight barium is the fourteenth and strontium is the fifteenth most abundant element by weight in the earth’s crust. Sodium and magnesium are also present in sea water brine wells and few salt lakes.

The first element of a group differs considerably from the rest of the elements of the same group. This anomolous behaviour is due to 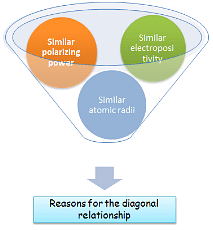 On moving diagonally some members show similar properties with the members of next higher group which is particularly seen in the elements of second and third periods of the periodic table. However the similarities shown are far less pronounced than the similarities with in a group.

The main reasons for the diagonal relationship are