The document Glossary and Important Information - The Story of Village Palampur Class 9 Notes | EduRev is a part of the Class 9 Course Social Studies (SST) Class 9.
All you need of Class 9 at this link: Class 9 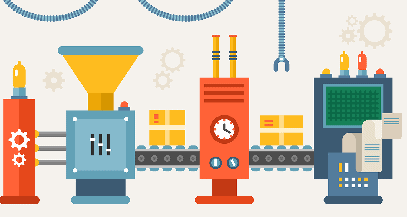 Fig: Farmer working in a rice field8. Factors of production: The essential elements which cooperate with one another in process of production. Following are the major factors of productions.(i) Land    (ii) Physical capital  (iii) Labor      (iv) Human capital9. Human capital: It is the most important factor of production which put together with land labor and physical capital and produce an output either to use for self consumption or to sell in a market.10. Multiple cropping: To grow more than one crop on a piece of land during the year in known as multiple cropping. Fig: Multiple cropping11. Yield: It is measured as crop produced on a given piece of land during a single season.12. Non-farm activity: It refers to the activities in a village other than farming. This includes activities like manufacturing, transportation, shop-keeping etc.13. Green Revolution: The large increase in agriculture production after 1976 due to adoption of new Agricultural strategy which implied a simultaneous use of better and modern agriculture inputs.