is said to be continuous if

denote the set of all position vectors of points in the 3D space  a is a constant vector. The scalar field φ is said to be differential if there exist a vector field w such that

It can be shown that there is at most one vector field, w satisfying the above equation (proof omitted). This unique vector field w is called the gradient of Φ and denoted by grad(Φ).The properties of continuity and differentiability are attributed to a vector field u and a tensor field T defined on a domain D, if they apply to the scalar field u·a and a · Tb ∀ a and b ∈

Given that the vector field u, is differentiable, the gradient of u denoted by

The divergence and the curl of a vector u denoted as div(u) and curl(u), are respectively scalar valued and vector valued and are defined by

When the tensor field T is differentiable, its divergence denoted by div(T), is the vector field defined by

If grad(Φ) exist and is continuous, Φ is said to be continuously differentiable and this property extends to u and T if grad(u · a) and grad(a · Tb) exist and are continuous for all a, b ∈

Consequently, all other operators div, ∆ are also linear operators.Before concluding this section we collect a few identities that are useful subsequently. Here Φ, Ψ are scalar fields, u, v are vector fields and A is second order tensor field. 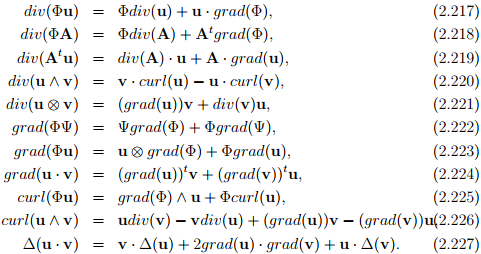 Till now, in this section we defined all the quantities in closed form but we require them in component form to perform the actual calculations. This would be the focus in the reminder of this section. In the following, let ei denote the Cartesian basis vectors and xi i = 1, 2, 3, the Cartesian coordinates.Let Φ be differentiable scalar field, then it follows from equation (2.206), on replacing a by the base vectors ei in turn, that the partial derivatives

exist in D and that, moreover, wi =

Let u be differentiable vector field in D and a some constant vector in E. Then, using (2.228) we compute

where ap and up are the Cartesian components of a and u respectively. Consequently, appealing to definition (2.207) we obtain

Then, according to the definition for divergence, (2.208)

Finally, let T be a differentiable tensor field in

from the definition (2.210).The component form for the other operators, namely Laplacian and Hessian can be obtained as respectively.

where zi denotes curvilinear coordinates. But

where gi is the basis vectors in the orthogonal curvilinear coordinates. Thus,

Comparing equations (2.239) and (2.240) we obtain the desired transformation relation between the bases to be:

The basis gi so obtained will vary from point to point in the Euclidean space and will be orthogonal (by the choice of curvilinear coordinates) at each point but not orthonormal. Hence we define

respectively. From these we compute 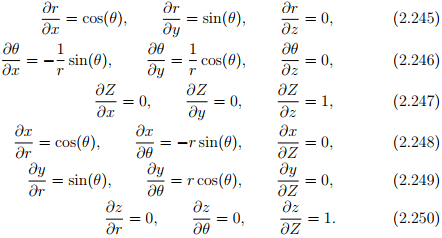 using the chain rule for differentiation.To obtain the components of grad(u) one can follow the same procedure outlined above or can compute the same using the above result and the definition of grad (2.207) as detailed below:

where we have used the following identities:

Using the techniques illustrated above the following identities can be established: