Ques 1:Is the formula "Real depth/Apparent depth=μ valid if viewed from a position quite away from the normal?

Ans:There is only one such situation. Light rays go undeviated through a prism only when the prism is kept in a medium that has the same refractive index as that of the prism itself. In all other situations, there will always be some minimum deviation in the path of a light ray passing through the prism.Ques 3:Why does a diamond shine more than a glass piece cut to the same shape?

Ans:A diamond shines more because of the phenomenon of total internal reflection (TIR). The refractive index of diamond is ≈2.4 and that of glass is ≈1.5.

By using the relation

, where C is the critical angle, we get refractive index (μ).

For a large refractive index, the value of the critical angle is small. Thus, for the diamond, the critical angle for total internal reflection is much smaller than that of the glass. Therefore, a great percentage of incident light gets internally reflected several times before it emerges out.

Ques4:A narrow beam of light passes through a slab obliquely and is then received by an eye (figure 18-Q1). The index of refraction of the material in the slab fluctuates slowly with time. How will it appear to the eye? The twinkling of stars has a similar explanation.

Ans:The beam of light will seem to appear and disappear, just like the twinkling of the stars. This is because the refractive index of the material in the slab fluctuates slowly with time. So, the light rays get refracted differently with time and this causes them to get concentrated during certain times, or get diffused at other times.

Ques 7:Can a virtual image be photographed by a camera?

Ques 8:In motor vehicles, a convex mirror is attached near the driver's seat to give him the view of the traffic behind. What is the special function of this convex mirror which a plane mirror can not do?

Ans:The special function of a convex mirror is that it creates the image of a distant object that is reduced in size, is upright or erect and always lies within the virtual focal length of the mirror. A plane mirror cannot do this. Also, as the image is formed within the focal length, the image is close to the mirror as well as is small in size, enabling the driver to clearly view the nearer vehicles behind the motor vehicle.

Ques 9:If an object far away from a convex mirror moves towards the mirror, the image also moves. Does it move faster, slower or at the same speed as compared to the object?

The image of the object moves slower compared to the object. It can be explained using the mirror formula :

Ques 10:Suppose you are inside the water in a swimming pool near an edge. A friends is standing on the edge. Do you find your friend taller or shorter than his usual height?

Ans:When viewed from the water, the friend will seem taller than his usual height.

Here, the refraction is taking place from rarer to denser medium and a virtual image is formed.

u and v are object and image distances, respectively.

R  is the radius of curvature, here we will take it as ∞. 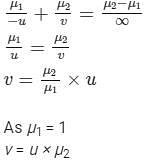 We know magnification is given by:

Putting the value of v in the above equation:

Ques 11:The equation of refraction at a spherical surface is

Taking R=∞, show that this equation leads to the equation

for refraction at a plane surface. 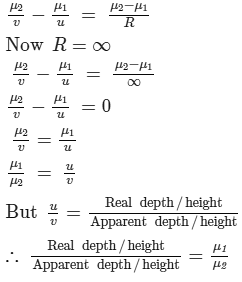 Ques 12:μA thin converging lens is formed with one surface convex and the other plane. Does the position of image depend on whether the convex surface or the plane surface faces the object?

Ans:Yes. Using the lens maker formula we can show it. We know that the formula is:

Where, f is the focal length of the thin converging lens.

μ2 and μ1 are refractive indexes of lens and air respectively.

R1 and R2 are the radius of curvature of convex and plane surfaces respectively.

When the convex surface is facing the object, we have:

When the plane surface is facing the object, we have:

Ques 13:A single lens is mounted in a tube. A parallel beam enters the tube and emerges out of the tube as a divergent beam. Can you say with certainty that there is a diverging lens in the tube?

Ans:Yes, we can say so with certainty, as only a diverging lens can cause a parallel beam of light to diverge.

Ques 14:An air bubble is formed inside water. Does it act as a converging lens or a diverging lens?

Ans:It will act as a diverging lens. This is because the refractive index of air is less than that of water. Thus, light will diverge after passing through the bubble.

Ques 15:Two converging lenses of unequal focal lengths can be used to reduce the aperture of a parallel beam of light without loosing the energy of the light. This increase the intensity. Describe how the converging lenses should be placed to do this.

Ans:Let the two converging lenses be L1 and L2, with focal lengths f1 and f2 respectively.

To reduce the aperture of a parallel beam of light without losing the energy of the light and also increase the intensity, we have to place the lens L2 within the focal range of L1.

Ques 16:If a spherical mirror is dipped in water, does its focal length change?

Ques 17:If a thin lens is dipped in water, does its focal length change?

Ans:Yes, the focal length of the lens will change. This is because its focal length is dependent on the medium in which the light rays travel.

Ques 18:Can mirrors give rise to chromatic aberration?

Ques 19:A laser light is focussed by a converging lens. Will there be a significant chromatic aberration?

Ques 1:A point source of light is placed in front of a plane mirror.

(a) All the reflected rays meet at a point when produced backward.

(b) Only the reflected rays close to the normal meet at a point when produced backward.

(c) Only the reflected rays making a small angle with the mirror meet at a point when produced backward.

Ans 1:(a) All the reflected rays meet at a point when produced backward.