A proxy server receives a request for an Internet service (such as a Web page request) from a user. If it passes filtering requirements, the proxy server, assuming it is also a cache server , looks in its localcache of previously downloaded Web pages. If it finds the page, it returns it to the user without needing to forward the request to the Internet. If the page is not in the cache, the proxy server, acting as a client on behalf of the user, uses one of its own IP addresses to request the page from the server out on the Internet. When the page is returned, the proxy server relates it to the original request and forwards it on to the user.

To the user, the proxy server is invisible; all Internet requests and returned responses appear to be directly with the addressed Internet server. (The proxy is not quite invisible; its IP address has to be specified as a configuration option to the browser or other protocol program.)

An advantage of a proxy server is that its cache can serve all users. If one or more Internet sites are frequently requested, these are likely to be in the proxy's cache, which will improve user response time. In fact, there are special servers called cache servers. A proxy can also do logging.

So Proxy Server does the following:

1.    The HTTP client sends a request to the HTTP Proxy.

3.    The HTTP Server sends back the answer to the HTTP Proxy.

4.    The HTTP Proxy sends back this answer to the HTTP client. 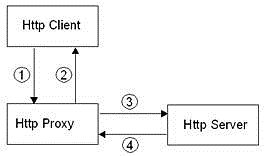 There are several advantages using proxies. The new server is completely hidden for the user. The URL always points to the HTTP Proxy, the connection to the real HTTP Server is hidden. The HTTP Proxy caches the documents locally, therefore we have a performance gain.

A content-filtering web proxy server provides administrative control over the content that may be relayed through the proxy. It is commonly used in both commercial and non-commercial organizations (especially schools) to ensure that Internet usage conforms to acceptable use policy. A content filtering proxy will often support user authentication, to control web access. It also usually produces logs, either to give detailed information about the URLs accessed by specific users, or to monitor bandwidth usage statistics. Many work places, schools, and colleges restrict the web sites and online services that are made available in their buildings. This is done either with a specialized proxy, called a content filter (both commercial and free products are available), or by using a cache-extension protocol such as ICAP, that allows plug-in extensions to an open caching architecture.

Some common methods used for content filtering include: URL or DNS blacklists, URL regex filtering, MIME filtering, or content keyword filtering. Requests made to the open internet must first pass through an outbound proxy filter. The web-filtering company provides a database of URL patterns (regular expressions) with associated content attributes. This database is updated weekly by site-wide subscription, much like a virus filter subscription. The administrator instructs the web filter to ban broad classes of content (such as sports, pornography, online shopping, gambling, or social networking). Requests that match a banned URL pattern are rejected immediately.

A caching proxy server accelerates service requests by retrieving content saved from a previous request made by the same client or even other clients. Caching proxies keep local copies of frequently requested resources, allowing large organizations to significantly reduce their upstream bandwidth usage and costs, while significantly increasing performance. Most ISPs and large businesses have a caching proxy. Caching proxies were the first kind of proxy server.Some poorly-implemented caching proxies have had downsides (e.g., an inability to use user authentication). Some problems are described in RFC 3143 (Known HTTP Proxy/Caching Problems).

If the destination server filters content based on the origin of the request, the use of a proxy can remove this filter. For example, a server using IP-based geolocation to restrict its service to a certain country can be accessed using a proxy located in that country to access the service.

Likewise, a badly configured proxy can provide access to a network otherwise isolated from the Internet.

Proxies can be installed in order to eavesdrop upon the data-flow between client machines and the web. All content sent or accessed – including passwords submitted and cookies used – can be captured and analyzed by the proxy operator. For this reason, passwords to online services (such as webmail and banking) should always be exchanged over a cryptographically secured connection, such as SSL.

By chaining proxies which do not reveal data about the original requester, it is possible to obfuscate activities from the eyes of the user's destination. However, more traces will be left on the intermediate hops, which could be used or offered up to trace the user's activities. If the policies and administrators of these other proxies are unknown, the user may fall victim to a false sense of security just because those details are out of sight and mind.

In what is more of an inconvenience than a risk, proxy users may find themselves being blocked from certain Web sites, as numerous forums and Web sites block IP addresses from proxies known to havespammed or trolled the site. Proxy bouncing can be used to maintain your privacy.

Proxy servers can perform a role similar to a network switch in linking two networks.

An anonymous proxy server (sometimes called a web proxy) generally attempts to anonymize web surfing. There are different varieties of anonymizers. The destination server (the server that ultimately satisfies the web request) receives requests from the anonymizing proxy server, and thus does not receive information about the end user's address. However, the requests are not anonymous to the anonymizing proxy server, and so a degree of trust is present between the proxy server and the user. Many of them are funded through a continued advertising link to the user. Example is www.anonymizer.ruas we discussed in class.

Some proxy servers implement a logon requirement. In large organizations, authorized users must log on to gain access to the web. The organization can thereby track usage to individuals.