In any process industry, we need to transfer heat for different operations (like cooling, heating, vaporizing, or condensing) to or from various fluid streams in various equipment like condensers, water heaters, re-boilers, air heating or cooling devices etc., where heat exchanges between the two fluids. In a chemical process industry, the heat exchanger is frequently used for such applications. A heat exchanger is a device where two fluids streams come into thermal contact in order to transfer the heat from hot fluid to cold fluid stream.

In general heat exchangers may be categorized into two general classes depending on the relative orientation of the flow direction of the two fluid streams. If the two streams cross one another in space, usually at right angles, the heat exchangers are known as cross flow heat exchanger as shown in the fig. 8.1(a).

Before understanding the principle of heat exchanger we would first understand it from the point of construction. 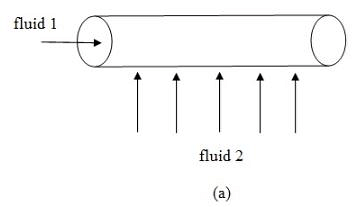 The heat exchanger as shown in fig. 8.2 consists of a bundle of tubes properly secured at either ends in tube sheets. The tube sheets are drilled plates into which the tubes are fixed up using different technique to have leak proof joints.  The entire tube bundles shown in the fig. 8.3 is placed inside a closed shell, which seals around the tube sheet periphery to form the two immiscible zones for hot and cold fluids are shown in fig.8.4. 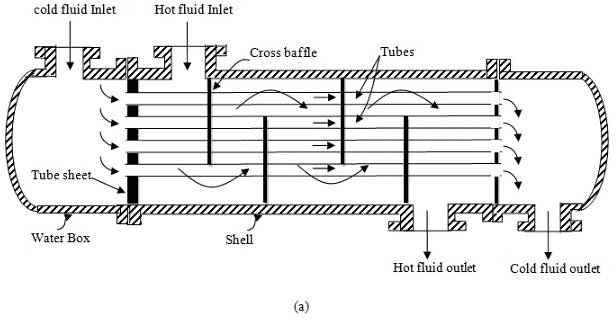 Fig.8.2:  A schematic of (a) one-shell pass, one tube pass heat exchanger; (b) parallel flow; and (c) counter flow

One fluid flows through the tubes while the other fluid flows around the outside of the tubes, it is the space between the tube sheets and enclosed by the outer shell.

Fig. 8.2 shows the simplified diagram of a shell and tube heat exchanger, showing a few of the important components. Infact,  the present heat exchanger used in the process industry are quite complex and have improved design such as factors for thermal expansion stresses, tube fouling due to contaminated fluids, ease of assembly and disassembly, size, weight, etc.

The heat exchanger shows in fig. 8.2 is having one shell and one tube pass since both the shell and tube side fluid make a single traverse through the heat exchanger. Thus, this type of shell-and-tube heat exchangers is designated as 1-1 exchanger. If we desire to pass the tube fluid twice, then it is designated as 1-2 exchangers. Similarly, if there are 2 shell pass and 4 tube pass, the designation will be 2-4 exchanger. The number of pass in tube side is done by the pass partition plate.  A pass particular plate or pass divider as shown in fig.8.5. The shell side pass can be creator by a flat plate as shown in fig.8.6. 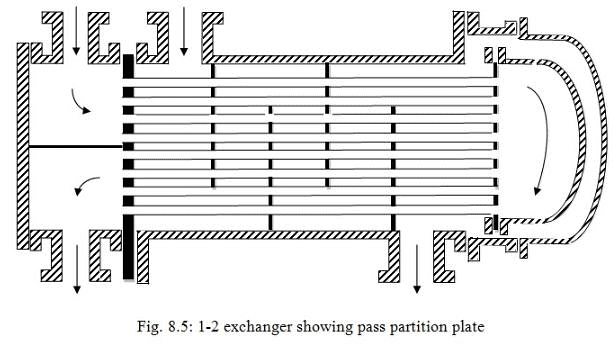 It can be understood that for a given number of tubes; the area available for flow of the tube side fluid is inversely proportional to the number of passes. Thus, on increasing the pass the area reduces and as a result the velocity of fluid in the tube increases and henceforth the Reynolds number increases. It would result in increased heat transfer coefficient but at the expense of high pressure drop. Generally, even numbers of tube passes are used for the multi-pass heat exchangers.

Figure 8.2 shows some baffles. These baffles (or shell-side baffles) are a metal plate usually in the form of the segment of a circular disc having holes to accommodate tubes. Shell-side baffles have two functions. The first is to create turbulence in the shell side fluid by changing the flow pattern parallel or cross flow to the tube bundles and thus increases the shell side heat transfer coefficient. The second major function of these baffles is to support the tube all along its length otherwise the tube may bend. Moreover, these baffles may have horizontal or vertical cuts (segmental baffle) as shown in fig.8.7. 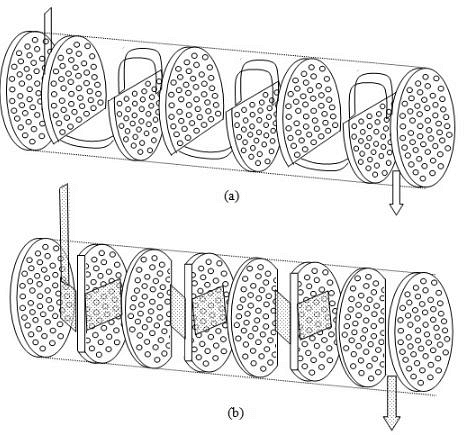 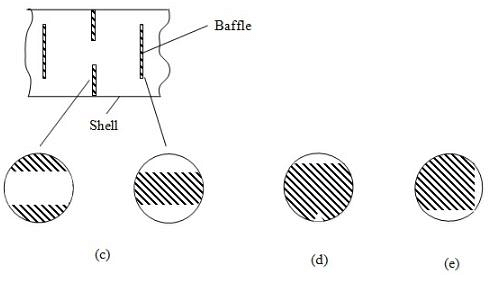