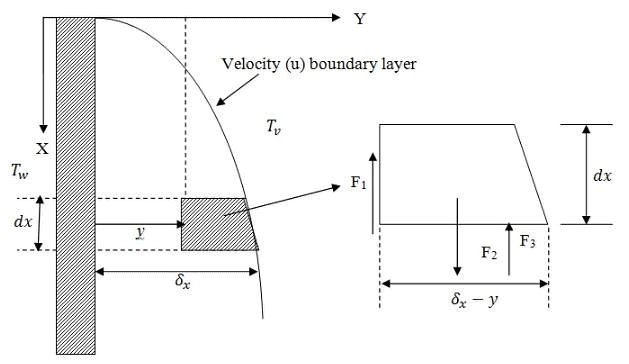 The wall temperature is maintained at temperature Tw and the vapour temperature at the edge of the film is the saturation temperature Tv. The condensate film thickness is represented by δx, a function of x. A fluid element of thickness dx was assumed with a unit width in the z-direction.The force balance on the element provides,

is the viscosity of the condensate (liquid). In the subsequent sections of this module, the subscripts l and v will represent liquid and vapour phase.

On integrating for the following boundary condition, u = 0 at y = 0; no slip condition.

Equation 6.6 shows the velocity profile in the condensate falling film.

The corresponding mass flow rate of the condensate for dy thickness and unit width of the film,

where dy is the length of the volume element at y distance. The rate of condensation for  dx.1 (over element surface) area exposed to the vapour can be obtained from the rate of heat transfer through this area.

The rate of heat transfer

The thermal conductivity of the liquid is represented by kl. The above rate of heat transfer is due to the latent heat of condensation of the vapour. Thus,

The specific latent heat of condensation is represented by λ. On solving eqs.6.7 and 6.8, for boundary layer conditions (x = 0; δx = 0)

The local Nusselt number will be,

We can also calculate the average heat transfer coefficient along the length of the surface,

In eq. 6.10, the liquid properties can be taken at the mean film temperature

It can also be understood that at any location on the plate the liquid film temperature changes from Tv to Tw. It indicates that apart from latent heat some amount of sensible heat will also be removed. Thus, to take this into account and to further improve the accuracy of Nusselt’s equation (eq. 6.10), a modified latent heat term

can be used in place of λ. The term Ja is called the Jacob number as is defined by eq. 6.11. All the properties are to be evaluated at film temperature.

The nature of the flow is determined by the film Reynolds number (Ref). The local average liquid velocity in the film can be obtained by eq. 6.6.

Now, the Ref can be calculated by,

The corresponding average heat transfer coefficient can be calculated by the following correlation,

The above relations may also be used for condensation inside or outside of a vertical tube if the tube diameter is very large in comparison to condensate film thickness. Moreover, the relations are valid for the tilted surfaces also. If the surface make an angle “θ” from the vertical plane the “g” will be replaced by “g.cosθ” in the above equations